Doritos, Are They Vegan? Which One’s Are?

Unfortunately for chip-loving vegans, most Doritos varieties are not vegan. They include cheese, milk, buttermilk, whey, and other milk-based components. 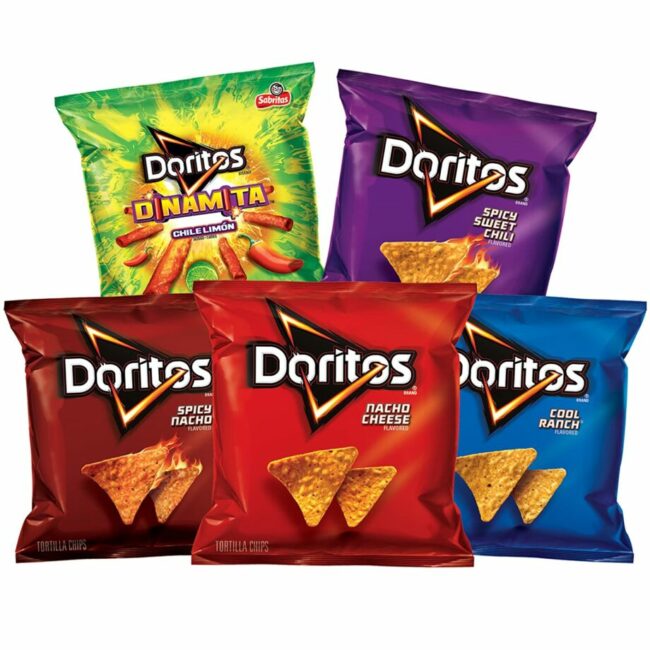 Doritos are well-known all across the world. They are the most popular flavor of tortilla chips produced by Frito-Lay, a subsidiary of PepsiCo. The variety of flavors, sometimes accompanied by dips, distinguishes them, with various limited-edition flavors being introduced.

What Doritos are they made of?

The materials used to create Doritos are crucial for vegans. Ground maize, vegetable oil, and salt make the base crunchy. Unique flavorings are then applied to provide a varied spectrum. Some flavors, such as Tangy Cheese and Flame Grilled Steak, are considered non-vegan since they contain whey from milk, cheese powder, milk powder, and other non-vegan ingredients.

Why is one of the Doritos flavors plant-based but not vegan?

Sugar is a principal component in Doritos goods, and sugar is not always considered vegan because refined sugar is filtered with bone char on sometimes. On the other hand, USDA organic goods can never be treated with bone char.

However, because there is no bone char in the finished product, it is still considered a plant-based food; it cannot be labeled vegan.

Is the sugar in Doritos vegan or plant-based?

Doritos’ sugar is plant-based. However, it is not guaranteed to be vegan. Because this information was unavailable on their website, I contacted consumer relations. The employee stated that their sugar originates from various sources and that they are unclear if it is filtered with bone char.

Which Dorito flavors are OK for vegans?

Only three tastes do not employ these sorts of substances in their flavorings.

However, does not end there.

While the three varieties mentioned above do not include any non-vegan ingredients, the production method of Doritos may cause concern for some stricter vegans. Doritos are manufactured at a facility that also processes milk. Thus there is a risk of cross-contamination.

While Doritos will try everything possible to prevent this from happening, it cannot be guaranteed. As a result, even the most ardent vegan will probably dismiss Doritos as a snack they cannot have owing to this danger.

Doritos will never be classified or certified as Vegan friendly due to the potential of cross-contamination. So it is all up to your view. Do you check that the product you’re eating has no animal products?

If this is the case, the three varieties of Chilli Heatwave, Lightly Salted, and BBQ and Chilli will suffice, as they solely include Vegan-friendly ingredients, which are listed on the package of each flavor.

However, if you’re a true vegan, you’ll be turned off by Doritos because they’re created in a factory that also processes milk.

Unfortunately, the great majority of Dorito varieties are still inedible to vegans since they contain animal or dairy ingredients non their ingredient lists.

Cheese, buttermilk, whey, and sour cream are the most prevalent non-vegan ingredients found in Doritos. They are all included in the Blazin’ Buffalo and Ranch Doritos, making them inappropriate for a vegan diet.

Is there any dairy-free Doritos?

The website states:’made that a factory that also handles: milk’ for all Dorito varieties that do not mention dairy products among their ingredients. This remark may be enough to turn off staunch vegans and lactose-sensitive persons.

On the other hand, others may not be put off by the mere prospect of cross-contamination with milk products in the same plant.

While Doritos does all in its ability to prevent cross-contamination, it cannot be guaranteed. As a result, as previously stated, some people will reasonably dismiss Doritos as a snack option because of this danger.