Celiac disease is very uncommon, affecting around one in every hundred children. However, this condition is sometimes identified in adults. In this scenario, physicians refer to an unusual expression of the condition. Some folks are also gluten intolerant. 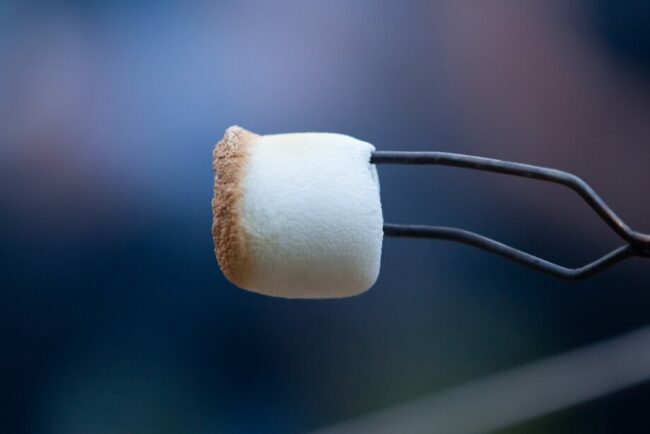 As a result, if you have even the smallest suspicion that your body is not gluten-friendly, you should consult a doctor and undergo the appropriate testing. Only the findings will reveal whether or not you require gluten-free items.

Gluten-free cuisine is now widely available. You may even prepare the necessary bread, biscuits, and cakes with modern technology! But what about marshmallows and other sugary treats? Is gluten present in marshmallows? Continue reading to find out what the answer is.

What Exactly Is Marshmallow?

The ancient Egyptians and Greeks are credited with the creation of these delights. The pureed fruit or berries were combined with egg yolk, and pectin was added to thicken this mass. According to one tale, their name was inspired by Zephyr, the deity who shared a recipe with the people.

As a result, this product became the ancestor of marshmallows, originally made from mallow root in the nineteenth century. The mallow root was used to cure sore throats back then. Even today, the typical marshmallow white or pale pink colors are owing to the mallow flowers used to make the treats.

Marshmallow is one of the few desserts whose recipe does not involve gluten or dairy components. Instead, traditional marshmallows are made from fruit or berry purée whisked with egg white, sugar, and pectin (either gelatin or agar).

Does this suggest that those with celiac disease or food allergies can safely eat store-bought marshmallows? Not necessarily, because confectionery production facilities are often used to produce various items, and delicacies may include traces of wheat flour and milk powder.

Furthermore, wide varieties of marshmallows are coated with chocolate glaze, which usually contains allergenic ingredients. As a result, persons with food allergies should choose marshmallows prepared on specific technical lines where products do not come into touch with allergens.

Gluten-hiding ingredients and cause for caution in marshmallows

Check the ingredient list of any marshmallows you want to purchase to ensure no hidden gluten names. Here is a list of popular names for gluten (note that this is not a complete list but rather a list of some common examples):

How to Check Whether Your Marshmallows Are Gluten-Free

Before purchasing, like with all processed goods, check the nutrition information label. Keep an eye out for apparent gluten-containing components. Take a look at the allergy list for wheat or gluten as well.

If the bag is gluten-free, make sure the food has a “gluten-free” label on the package as well. According to the Celiac Disease Foundation, cross-contamination happens when foods come in touch with gluten components during production or preparation.

If an item has a gluten-free label on the container, you can confidently put it in your shopping basket. According to the FDA, these labels indicate that the product has 20 parts per million (ppm) of gluten or less, indicating that the item is typically safe for persons with gluten sensitivity or intolerance.

A Certified Gluten-Free seal may also appear on some packaged items. These symbols indicate that a reputable third-party agency has examined the product. The Gluten-Free Certification Organization is one of the most popular third parties that employ stringent requirements, certifying items containing only 10 ppm of gluten.

What Can Gluten-Free Marshmallows Be Used For?

These treats are like Zephyr, but they are not the same. They also have a unique characteristic: when cooked, the appropriate marshmallows do not flow but slowly melt, preserving flavor and developing a delicate texture, and when roasted over the fire, they are coated with a crust on the exterior. As a result, marshmallows may now be used in various ways.

One of the most typical use is as an addition to chocolate and coffee with milk foam. Small lozenges’ consistency changes somewhat when they warm up, becoming softer, airier, and more viscous.

Marshmallows may be used to make delicious hotcakes. Heated pastilles can be rolled in colorful sugar sprinkles for cakes, creating a delightful and visually appealing treat for the youngster. In addition, marshmallows are used to garnish cakes and pastries, turning them into true works of art.

You may be wondering if marshmallows contain gluten. Many firms substitute maize starch for wheat starch or wheat derivatives. Furthermore, marshmallows are gluten-free if they contain less than twenty parts per million (ppm) of gluten. Therefore, gluten traces in such goods should be avoided since they might be detrimental to those with celiac disease. Some gluten-free marshmallow manufacturers include:

It is important to remember that jet-puffed gluten-free marshmallows may contain traces of gluten. They will not do any harm to people who are gluten intolerant. However, if you have celiac disease, you should avoid them.

The marshmallows labeled gluten-free by the following companies have been tested and do not contain gluten.

The marshmallows in the following brands may not include gluten components and may not be produced in facilities where cross-contamination is a concern. However, the firms do not officially label or certify their marshmallows as gluten-free. Therefore, they should be safe, but double-check labels or contact the manufacturer because ingredients or manufacturing methods might change without warning.

You can control what goes into them by making gluten-free marshmallows with gluten-free ingredients.

Use this recipe to make natural homemade marshmallows.

In the resultant apple bulk, combine sugar and citric acid. Next, place the applesauce on the stove and simmer over medium heat until it thickens. Don’t forget to give it a good stir. Allow it to cool.

How to Keep Gluten-Free Marshmallows Fresh

So now that you’ve finished constructing your Marshmallow, the following step is to preserve it to minimize early damage. Here are the steps to storing gluten-free marshmallows:

This procedure will allow you to keep your marshmallows for three to four months. The marshmallow will not get firm if it is kept in the freezer.

Tip: When storing leftover marshmallows, keep in mind that after a time, it gets sticky; all you have to do is add shredded sugar, coconut toppings, or corn flow when the marshmallow thaw. If your marshmallows are firm, place them in a plastic bag and immerse them in hot water to soften them again.