Butterscotch Vs Caramel: What Is the Difference Between?

Home  »  Food & Drinks   »   Butterscotch Vs Caramel: What Is the Difference Between? 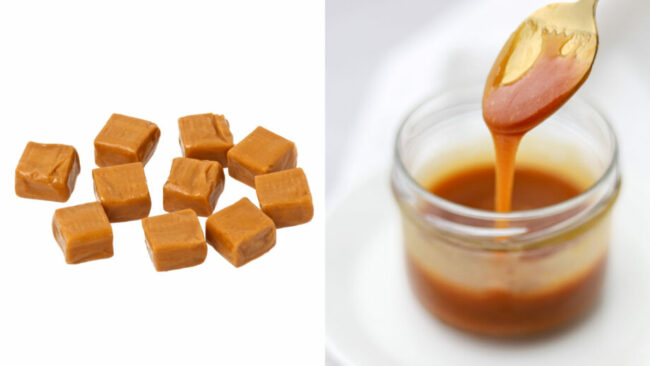 What exactly is Butterscotch?

Butterscotch is often made using brown sugar and butter. However, some recipes call for sugar, butter, cream, and vanilla. It has a similar tint to caramel. However, it is a richer golden tone.

Butterscotch has a sweet taste as well. However, because it is made with brown sugar, it has molasses taste characteristics.

Butterscotch, with its rich and nuanced flavor, is an excellent ingredient in a wide range of dishes. Here are a few suggestions to get you started.

What exactly is caramel?

Is it ca-ra-mal or care-a-mel? The answer is that it may be said either way. Caramel is just sugar that has been browned in the oven. Granulated sugar melts and darkens when heated, releasing unique flavors that taste less sweet and toasted.

Some heavier caramel sauces are produced using a combination of white granulated sugar, heavy whipping cream, butter, and vanilla extract. No matter how it’s produced, Caramel goes well with apple slices, ice cream, and macchiatos. It is frequently manufactured into candy, much like butterscotch.

Caramel is a sweet and rich combination that is often used in a variety of dishes. It is typically a thick sauce to top, dip, or fill delicacies. It has a sweet flavor with a smokiness that comes from cooking it.

Caramel goes well with a variety of flavors and may be used to sweeten a variety of dishes. Here are a few suggestions to get you started.

So, what’s the distinction?

As a result of the name, butterscotch is more likely to include butter than caramel. However, because some caramel recipes call for butter, the two may taste identical. The biggest distinction is in the sugar. Caramel is often prepared using granulated sugar, whereas butterscotch is typically created with brown sugar.

Butterscotch sweets are often firmer than caramel candies, which are typically chewy and mushy. Both are sweet and might need a pinch or two of sea salt.

Both butterscotch and caramel are delicious desserts created from the same components. But who will triumph in the butterscotch vs. caramel battle? It’s up to you to make that choice.

Can caramel be used in place of butterscotch?

Can butterscotch be substituted for caramel?

Yes, butterscotch may be used in place of caramel. They both have a sweet and rich taste that complements comparable sweets and beverage combinations.

Do butterscotch and caramel have the same flavor?

Caramel and butterscotch have similar tastes, yet they are not identical. Caramel is formed by heating white sugar, which results in a sweet, nutty taste. Brown sugar is used to make butterscotch, which has a sweet flavor with traces of molasses.

Is salted caramel the same as butterscotch?

Is scotch used to make butterscotch?

No, scotch is not utilized in the preparation of butterscotch. While there is some controversy about how butterscotch received its name, there are two possible sources. It was named either because it was invented in Scotland or because “scorched” butter is used in its preparation.