Does American Cheese Go Bad? How Long Does It Last

What exactly is American Cheese?

American cheese is a type of processed cheese often offered in slices rather than blocks or wheels. Bags of grated American cheese are also available, as their primary application is in sandwiches.


If you’ve ever wondered where you could get shredded American cheese, your neighborhood deli is an excellent place to start. 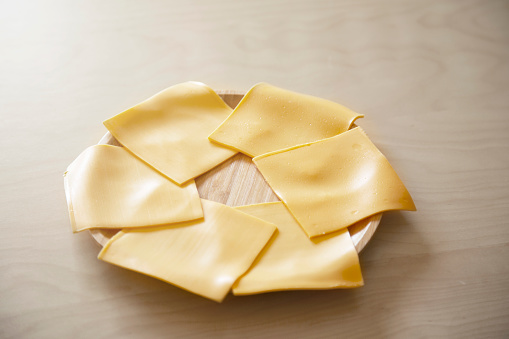 American cheese is manufactured by blending several kinds of cheese and adding chemicals for color and preservation, as well as taste enhancers and emulsifying salts, due to its processed nature.

What Makes American Cheese So Different compared to others?

While strolling through the cheese aisle, you will see various varieties of cheese. Cheddar, Colby, Pepper Jack, Swiss, and more kinds comparable to these are popular.

Of course, suppose you go to a cheese specialty shop or even a deli. In that case, you’re likely to encounter a variety of additional possibilities, such as gouda and other varied specialty cheese mixes. These are what most people consider to be real cheese.

The problem is that, while American cheese is created from cheese, it is not regarded as real cheese. It is created in a very unusual way, employing a range of cheeses that are processed together and sliced into squares.

The fact that American cheese may be prepared in various ways explains why so many distinct variations exist. There are no limitations or regulations regarding the sort of cheese processed into it.

Because cheddar and Colby were popular tastes that melted well, American cheese was traditionally a combination of the two. However, this is not always the case, and you may discover that some have diverse flavors and textures. Some will also melt more quickly than others.

The majority of American cheeses include a lot of chemicals and processed components. If you buy American deli cheese, the quality may be higher. If this is a problem for you, read the ingredient labels carefully.

Are Kraft Singles made from real cheese?

Kraft Singles contains 98 percent “genuine” cheese, whey protein concentrate, and sodium citrate. The remaining components are emulsifiers and preservatives that help it melt well and keep it fresh for a long time.

Is American cheese bad for you?

No, not exactly. One slice of American cheese has about 60 calories, which isn’t much in the grand scheme of things. While one American cheese slice does not supply many vitamins or minerals, it does give 10 to 20% of your daily recommended dose of calcium.

How long does American cheese last

And, sure, American cheese can be stored for a long time. However, it might lose its ideal quality and turn rancid with time.

To determine the shelf life of American cheese, read the manufacturer’s label at the time of purchase.

American cheeses are labeled with best before and best by dates. These dates do not indicate that your American cheese will expire beyond the date specified.

Packets of American cheese that have not been opened can be kept in their original container.

Whether you save unopened or opened American cheeses, keep them in the refrigerator at all times.

When storing American cheese, wrap the slices in plastic freezer wraps or aluminum foil before placing them in freezer bags.

Frozen American cheese may be stored for up to eight months after its best before date. If you maintain your cheese frozen at 0 degrees Fahrenheit at all times, it will be safe to eat permanently.

Once thawed, the frozen American cheese will keep in the fridge for three to four days.

Is it necessary to keep sliced American cheese refrigerated?

Because American cheese is pasteurized, it does not mature like other forms of cheese, even the cheeses from which it is created, such as Colby and cheddar. Canned, squeezable, and sealed loaves of processed cheese do not need to be refrigerated until opened.

Refrigeration is required for processed cheese slices and cheese products, especially American cheese. Refrigeration between 35 and 40 degrees Fahrenheit keeps your cheese slices fresh and free of mold and germs, whether individually wrapped or not.

How long can you keep cheese out of the fridge?

Cheese may normally be left out at room temperature for 4 to 8 hours, depending on the variety, and still be safe to consume.

According to the food safety experts at Clemson University’s Cooperative Extension, soft cheeses like Brie and Camembert can be left out at room temperature for up to 4 hours.

American cheese is classified as semi-hard and will ultimately go bad. It is good for up to one month beyond the marked expiration date if left unopened and for two weeks if opened.

If you detect any changes in your American cheese slices’ texture, odor, or flavor, toss them away. Visible mold is also an indication of deterioration; remove any moldy pieces.

Freezing your cheese at 0 degrees Fahrenheit can increase its shelf life by three months, but it will affect its flavor and texture, making it more suitable for cooking than eating on its own.

How long beyond the expiration date can you use it?

OK for 3-5 weeks (provided you got them before the “sell by” date). VanLandingham believes in double-grading as it will degrade in a week but remain wonderfully tasty. Poultry and fish are available. This should be cooked or frozen within a day or two.

How Can You Tell if Your American Cheese Is Bad? Shelf life of American cheese!

You don’t have to be a cheesemonger to figure out when your American cheese has gone bad. You can find it out with your senses.

All you need to do is look for symptoms of deterioration, smell it, or taste it to see whether it’s time to throw out your American cheese.

Because American cheeses are often yellow or white in hue, you may not notice any color changes. However, keep an eye out for any mold growth on the surface.

Molds come in various hues, including white, orange, red, and blue. If you discover any, throw out the entire block of cheese.

Along with colorful molds, you may see slimy molds or holes in the cheese. These are definite indications that your cheese has gone bad.

You can next take a thorough smell to see whether your American cheese has gone rotten. If your cheese has an odd odor or smells sour, it has most likely gone rotten.

Another way to determine the quality of your American cheese is to taste it. However, preserve this as a last option and sample a small quantity of it.

The cheese will have a peculiar, off-taste if it has gone bad. If it occurs, discard the entire cheese.

How to Store American Cheese Correctly

Almost any sort of cheese may be stored in the freezer. You must bknowthat the cheese will not be the same once frozen. The same may be said about American cheese.

However, because American cheese is so processed, you won’t perceive much of a change after freezing it.

American cheese should be kept in the refrigerator to keep it fresh. It should also be kept in an airtight container. This is sufficient for storing if your cheese slices are individually wrapped.

If they aren’t, you’ll want to put them in a sealing bag or container to keep them safe.

If you buy your American cheese from the deli counter and wrap it properly, it should survive for about 2-3 weeks in the fridge.

Pre-sliced and packaged American cheese can occasionally be kept in the fridge for up to three months.

Is it possible to freeze American cheese?

Yes, you can freeze American cheese, and it’s a straightforward process. If you’re worried about not using all your American cheese before it goes bad, freezing it is a terrific technique to extend its shelf life.

You may freeze it for up to 6 months with good results, but there are several things to keep in mind to keep the quality.

How to freeze American Cheese

To get the finest quality out of your frozen American cheese, ensure it’s properly prepared and stored. Here are some easy steps to take while utilizing American cheese.

It is critical to wrap your American cheese before storing it thoroughly.

Fortunately, a lot of American cheese comes in pre-wrapped slices, which makes things much easier. If your cheese isn’t already wrapped, you’ll need to wrap each layer in plastic or wax paper securely.

2. Put Your Cheese in an Appropriate Container

After you’ve individually wrapped your American cheese, place the wrapped pieces in a freezer-safe storage container or a freezer bag.

By placing your frozen American cheese in a container, you are providing it with an extra layer of protection throughout the freezing process.

This is significant because cheese may absorb aromas from the refrigerator. Keeping it hidden will prevent this from happening.

3. Put a Label on Your Cheese

Once your American cheese is ready for storage, mark it with either the date you froze it or six months after the day you froze it. This will help you remember when you should eat the cheese.

Place your cheese in the freezer and take out slices as needed.

When it comes time to utilize your frozen American cheese, thawing it is a simple process.

Take out as many slices as you require and place them in the refrigerator to defrost for a couple of hours. You’ll be able to use them on your sandwiches and meals once they’ve softened.

How to Thaw Frozen American Cheese

To thaw your frozen cheese, take out the desired number of slices and place them in the refrigerator overnight. If you need them to thaw quickly, put them on the counter for a few hours or microwave them for a few seconds.

A defrosting tray also speeds up the process and is useful when you’re in a rush.

How to Cook with Frozen American Cheese

Here are a few ideas on how to use frozen American cheese after it has thawed.

While thawed frozen American cheese can be used to top sandwiches, it’s ideal to use fresh American cheese in recipes that call for a considerable amount of the item. Soup and mac and cheese are examples of such dishes.

This is because you want the best quality and taste in your recipes, and the only way to obtain it is with fresh American cheese. On a sandwich, you won’t detect much of a difference, but in a recipe that calls for American cheese as the major component, you could notice a slight change in flavor.

Why is my thawed American cheese grainy?

After freezing, all cheeses get slightly gritty. This can be decreased by properly freezing the cheese, slowly thawing it in the refrigerator overnight, then utilizing the cheese in prepared meals (or melting it thoroughly).

Unlike soft cheeses such as cream cheese and brie cheese, American cheese keeps for a long period.

So, preserving it properly shouldn’t be an issue when it comes to preserving it for a long period. Keep the cheese in the refrigerator at all times, and you’re set to go.

You may use the delectable cheese to create your dishes.

Whether you consume the cheese on its own or add it to pasta, salads, pizzas, or bacon, American cheese will undoubtedly give a taste of its own to your recipes.

You may also rapidly melt and use it as a topping or dip.