Does Grapeseed Oil Go Bad? How Long Does It Last?

Is it possible for grapeseed oil to go bad? How should grapeseed oil be stored? Here’s a quick reference guide with all the information you need.


Grapeseed oil is a versatile cooking oil with a mild, nutty taste. This oil, which is gaining popularity, can be refrigerated and is a flexible alternative for kitchens. 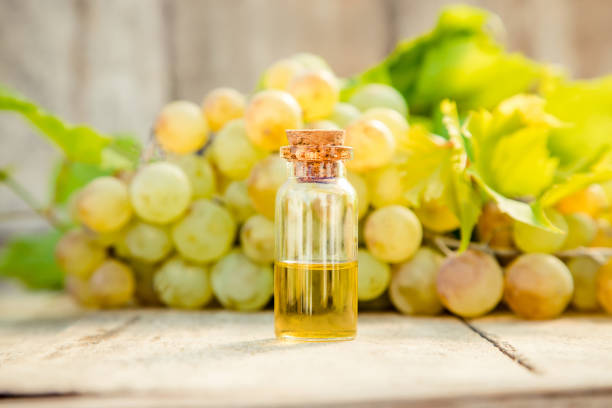 The problem is that, while having a reasonably long shelf life, grapeseed oil, like other liquid fats, can go rancid. It is critical to ensure appropriate storage and recognize symptoms of decomposition while using grapeseed oil.

What Exactly Is Grapeseed Oil?

Grapeseed oil is a vegetable oil made from grape seeds that may be used in cooking and baking. Grape seeds are a byproduct of the winemaking process and only produce a small amount of oil, making grape seed oil extremely pricey.

Grapeseed oil has increased in favor of a healthier alternative to other types of vegetable oils. It is strong in vitamin E and polyunsaturated fat. Therefore it lives up to its health promises.

There are two methods for extracting oil from grape seeds. The first method, which produces the most oil, is to extract it using chemical solvents. This is how most grapeseed oil you’ll see in supermarkets is manufactured.

Grapeseed oil, whether extra virgin, cold-pressed, or expeller-pressed, is a specialty product prepared by mechanical extraction, which retains the oil’s taste and color. It will taste slightly nutty or fruity and be a brighter green hue.

Most mainstream grocery shops offer it. However, it will cost more than refined grapeseed oil due to the number of grape seeds required and the fact that it is produced without chemical solvents.

If possible, purchase grapeseed oil in dark bottles to prevent it from harmful light rays that might diminish its shelf life.

Is it possible for Grape Seed Oil to go bad?

Grape seed oil, like other cooking oils, can spoil. While mold and bacteria are rare to thrive in the oil, they can still deteriorate due to oxidation. When oil is exposed to oxygen, it oxidizes and decreases the quality of the oil, eventually making it rancid.

Rancid oil has lost most of its health advantages and can be harmful to one’s health if eaten over an extended time.

While oxidation is unavoidable, careful storage can assist in reducing the process and increase the shelf life of grape seed oil.

What Is the Shelf Life of Grapeseed Oil?

The shelf life of grapeseed oil is comparable to that of other cooking oils. The bottle, as is customary, has a best-by date printed on the label. That date is more concerned with freshness than with food safety.

If you follow the storage rules I mentioned earlier, you may anticipate the oil to be in great condition for at least a few months after that date.

When you open the container, the oil is exposed to “new” oxygen, which accelerates the oxidation process. The oil becomes rotten as a result of oxidation. However, this is a long process, especially if you open the bottle occasionally and close it carefully after you’re finished.

Nonetheless, the oil will keep its freshness for roughly a half-year in the pantry and a year if refrigerated. Please remember that these are only estimates, and your scenario may differ.

Please keep in mind that the times shown above are just for the finest quality.

How Long Does Grape Seed Oil Last in the Outdoors?

The shelf life of grape seed oil is determined by whether or not it has been unsealed, as the seal on olive oil is intended to keep it from oxidizing and turning rancid due to air exposure.

However, once the grape seed oil is opened, it will only survive another six months at best, and would most likely go bad sooner if used often.

How Long Does Grape Seed Oil Keep in the Refrigerator?

The cool and tightly sealed environment of a refrigerator can assist to extend the life of unopened grape seed oil, but it is less beneficial for oil that has already been opened.

The refrigerator can keep unopened grape seed oil fresh for up to a year after the expiration date, implying that grape seed oil can really last longer than a year.

At the same time, opened grape seed oil has a maximum shelf life of six months, the same as when not refrigerated, although grape seed is more likely to last the full time in the refrigerator than in the pantry.

How Long Can Grape Seed Oil Be Stored in the Freezer?

Freezing grape seed oil is a horrible idea for several reasons; the first is that freezing oil does nothing to prevent it from spoiling; thus, placing it in the freezer is futile.

In fact, because the compounds that make up the oil do not respond well to high cold, prolonged freezing can lead grape seed oil to become unstable at normal temperature.

While freezing grape seed oil isn’t certain to damage it, it does bring no benefits to its shelf life and can be harmful in the long run, so keep your oil out of the freezer.

How do I know if grapeseed oil has gone bad?

If you’ve had the same bottle of grapeseed oil for a long time, possibly even more than a year, you might be wondering if it’s still safe to use.

Oils do not normally mildew or degrade in a visible way, although they might grow rancid. Rancidity arises as a result of a chemical process that causes fat molecules to break down.

An oil that has gone rancid may not be harmful to your health, but it will change its flavor and may impair the flavor of your food. When oil oxidizes, it loses most of its nutritional value, including the vitamin E contained in grapeseed oil.

You should smell your grapeseed oil to discover whether it has gone rancid. If it has an unusual odor, it should be discarded. Rancid oils have a metallic, bitter, or soapy odor.

Oils deteriorate much faster when exposed to direct light or air. This is why correct storage methods are critical.

Grapeseed oil’s prolonged shelf life begins in the grocery shop. Look for bottles with a deep color. This will assist in reducing light exposure and hence extend the life of your grapeseed oil.

In addition, choose a bottle made of glass. By avoiding plastic, you may assure that no chemical components are leached into your oil.

Grapeseed oil can be preserved the same way as other culinary oils, such as olive oil or peanut oil. Cooking oils should be kept in a cool, dark place like a pantry.

Grapeseed oil should not be exposed to direct light or moisture, since this can alter its consistency and quality.

Grapeseed oil should be stored at a steady temperature and in a cold, dark place. Temperature fluctuations might cause the oil to break down faster and lose quality.

When the container containing the grapeseed oil is opened, it should be firmly sealed, or it will be exposed to moisture and air.

Grapeseed oil, unlike many other types of oils, Grapeseed oil does not solidify and becomes murky when refrigerated. As a result, it can be used as an oil substitute in dressings or sauces that require refrigeration.

Refrigerating grapeseed oil can increase its shelf life by several months, allowing it to last up to a year. Once refrigerated, grapeseed oil should remain at a colder temperature.

Returning it to room temperature storage will compromise its consistency and lead it to deteriorate faster.

Can Grape Seed Oil Be Freeze? How?

Grape seed oil can be frozen if placed in the freezer, although freezing grape seed oil is not only ineffective for long-term preservation but can also harm the oil. As a result, you should keep grape seed oil away from temperatures that might cause it to freeze.

The oil is not preserved by freezing. No matter how completely you freeze grape seed oil, it does not significantly extend its shelf life. You could get a few additional days out of frozen grape seed oil, but given how difficult it is to defrost frozen oil and the inherent dangers that freezing offers, it’s not worth the risk.

How Should Grape Seed Oil Be Thawed?

Because cooking oil is very flammable, you should not attempt to heat it manually; instead, let it thaw slowly in the refrigerator over a few days.

Grapeseed oil is a flexible cooking oil that works well in products that need to be refrigerated. When kept properly, grapeseed oil may be used in meals for up to a year, making it a must-have in your kitchen.