Does Hydrogen Peroxide Expire? How Long Does It Last?

Hydrogen peroxide is utilized in various domestic applications, including removing stains from furniture and cleaning clothing. 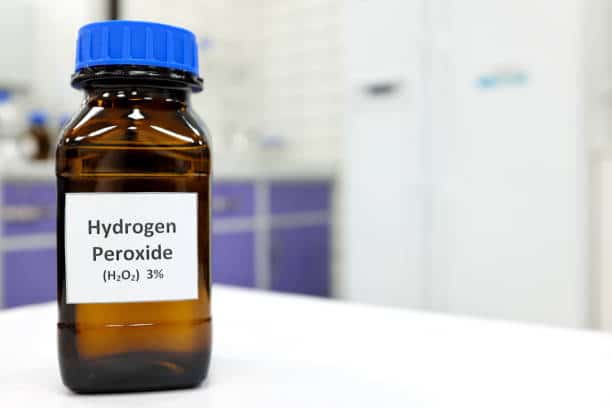 Because it is a chemical substance, utilizing an expired one might be hazardous.

As a result, we recommend that you read this material thoroughly.

How many of us have a bottle of hydrogen peroxide on a home shelf? Probably quite a few, right? This chemical is indispensable for each homemaker, but do we know how long it can be securely stored?

Let’s see when it’s time to let it go.

What Exactly Is Hydrogen Peroxide?

To begin, let us define what this peroxide is.

H2O2 is the chemical formula for hydrogen peroxide. Pure peroxide is a transparent, light-blue liquid with a somewhat thicker viscosity than water.

However, it is now widely utilized for commercial reasons, and producers add other components, such as stabilizers, to give the compound certain properties. Of course, such additions may alter the basic properties of the molecule.

Even though it is one of the weaker acids, hydrogen peroxide is an acid.

It has been used successfully for:

However, when working with H2O2, one must exercise extreme caution since, when it contains certain extra components, its acidic properties may grow stronger and become more dangerous to people.

Always wear gloves and a protective mask to protect yourself from this substance when dealing with hydrogen peroxide. Because it is an acid, it harms our skin, eyes, and internal organs (lungs, throat, etc.).

For the same reason, keep the hydrogen peroxide bottle away from children and pets.

When H2O2 is combined with vinegar or bleach, it tends to explode; thus, never mix these liquids!

Hydrogen peroxide was formerly commonly used as an antiseptic, but it has since been proven to be more harmful than beneficial to human skin, so avoid using it to treat cuts and wounds.

When stored properly, the expiration date of hydrogen peroxide might come after a very long time!

Is hydrogen peroxide explosive, and how long does it last?

The compound will easily last three years if kept unopened and stored according to the instructions.

However, once the bottle or tank has been opened, the liquid must be used within six months. If it is stored for an extended period, its properties will deteriorate, and it will have to be discarded. In addition, because hydrogen peroxide interacts with air, it will gradually degrade to water once opened.

The shelf life of peroxide is highly dependent on storage guidelines; therefore, ensure that the chemical is securely and correctly stored.

The Effect of Light on the Shelf Life of H2O2

Because hydrogen peroxide is most reactive to light, hydrogen dioxide is typically packaged in a brown or opaque container. This solution is often kept in the dark container with a stabilizer.

As a result, hydrogen peroxide must be kept in a cold, dark environment.

As a result, the rate of breakdown rises as concentration levels increase.

How to Determine Whether Peroxide Is Still Safe

Of course, understanding how to detect if hydrogen peroxide is still good may be useful when determining if it is safe and viable to continue using a solution.

To see whether you have old hydrogen peroxide, utilize a simple and safe procedure that won’t take long.

Pour some H2O2 into the sink, and you’re done. If the solution begins to bubble and fizz, it is safe to use. However, the substance is most certainly harmful if no observable symptoms are observed.

When hydrogen peroxide compounds expire, they slowly degrade into the water, which is why there is no bubbling action when air exposure.

What Causes Hydrogen Peroxide To Expire, If At All?

More specifically, this chemical can’t technically expire, so that it won’t go bad.

There are no visible indicators of spoiling, such as a strong smell or changes in color or texture. There will also be no silt or other visible signs of chemical deterioration.

Of course, an unopened bottle of hydrogen will easily last three years if stored according to the instructions.

However, once the container is opened, it is preferable to utilize the liquid as soon as possible because the product may lose its quality after six months of unscrewed storage!

Because the molecule includes additional oxygen, it is exceedingly unstable, and water begins to dissociate immediately after it is generated.

No matter how properly we maintain it, it will eventually turn into H2O rather than H2O2, and there will be nothing we can do about it.

So, certainly, hydrogen peroxide will lose its effectiveness. That is why it is recommended to replace it as soon as possible; otherwise, it will be useless.

Is it possible to utilize expired hydrogen peroxide?

According to Healthline, hydrogen peroxide is not hazardous beyond its expiration date, but its potency has degraded as time has passed.

Even an outdated, unopened bottle of hydrogen peroxide is no longer full strength. In reality, it’s most likely simply ordinary water. On the other hand, expired hydrogen peroxide should be handled with caution since it may be a skin irritant and dangerous if swallowed.

Pour some hydrogen peroxide into the sink to see whether it still fizzes or bubbles; if it does, it’s still effective. It’s a no-go if there’s no fizz, and it’s time to replace your bottle.

Why Does Peroxide Bubble?

Even before it is opened, hydrogen peroxide decomposes into water and oxygen. This reaction’s chemical equation is:

The bubbles generated during peroxide breakdown are made of oxygen gas. Ordinarily, the process is too slow to see, but when hydrogen peroxide is poured over a cut or other surface containing a catalyst, it happens considerably faster. Transition metals, such as iron in the blood, and the enzyme catalase, are examples of catalysts that speed up the breakdown reaction.

Catalase is an enzyme found in practically all living species, including humans and bacteria, that protects cells against peroxide by rapidly deactivating the molecule. Even when created by body cells as part of the oxygen cycle, peroxide must be neutralized before it may cause oxidative harm.

However, as peroxide oxidizes, it damages cells. This is referred to as bubbling. When hydrogen peroxide is applied to a wound, both healthy tissue and microorganisms are destroyed when the peroxide is attacked and begins to degrade. Damage to healthy tissue usually heals on its own.

How to Extend the Shelf Life of Hydrogen Peroxide

Keep hydrogen peroxide solution in its original dark-colored or opaque bottle and store it in a dark, cold area to extend its shelf life. Refrigeration is beneficial, particularly for concentrated solutions.

Storage Requirements And Conditions For H2O2

Because we use this chemical frequently at home, we must know the fundamental storage requirements and be educated about the compound’s correct storage conditions.

These conditions apply to both pure hydrogen peroxide and compounds containing it. Regardless of the substance’s concentration, it must be kept exactly as directed.

What Reactions Does Hydrogen Peroxide Have?

Hydrogen peroxide is extremely indispensable in any household! This chemical component is a versatile substance that may be found in the food and textile industries, as well as in chemistry and even in our homes!

Those who use it in the home should know that H2O2 is not always safe to mix with other items since it might generate an aggressive response.

Check out what chemical items cannot be safely mixed with H2O2 to ensure that you do not mix it with something that may cause an explosion.

When we combine these two, we obtain a reaction that produces peracetic acid. It is a very corrosive kind of acid that, if inhaled, can cause severe damage to the skin, eyes, nose, throat, and lungs.

However, using these two items independently is OK, one after the other.

Although you may improve the cleaning properties of peroxide by adding ammonia, we do not advocate it. When these two items are mixed in the same tank, especially a closed one, they produce toxic fumes that can harm your health if inhaled.

There is no chlorine or bleach.

Because it whitens and shines our clothes, hydrogen peroxide is frequently used in laundry.

However, using it with bleach or any other chlorine-containing cleaning product is not good. Such a chemical will emit toxic gases that are detrimental to our throats and lungs and can create significant problems.

Because we now use so many chemical items in our homes, it is essential to understand which of them may be combined and which are safer to use separately, as certain combinations can be extremely dangerous!

How to Safely Use Hydrogen Peroxide

Make sure the space is well-ventilated before using it to clean inside your house. Wear a mask to avoid breathing it if you can’t open a window or guarantee appropriate air movement.

Hydrogen peroxide has the potential to irritate and even burn your skin. Wear gloves when using it to avoid getting it on your hands. If you get some on your hands, immediately wash them with soap and water and rinse them under the faucet for a few seconds.

Also, avoid getting it in your eyes since it can cause discomfort and, in extreme situations, eye damage. If you get some in your eyes, flush them with water for at least 15 minutes.

Ingesting hydrogen peroxide is not recommended. As a result, it’s critical to keep it in a secure location away from children and pets.