Does Kahlua Go Bad? How Long Does It Last?

Kahlua, like many liqueurs, goes bad. While your bottle of Kahlua may not rot in the usual sense of developing mildew or becoming rancid, its quality will continue to deteriorate with time.


According to the maker, Kahlua should be drunk within four years of its creation date. This shelf life guideline is the same whether the bottle has been opened or not, and it is unaffected by storage technique. 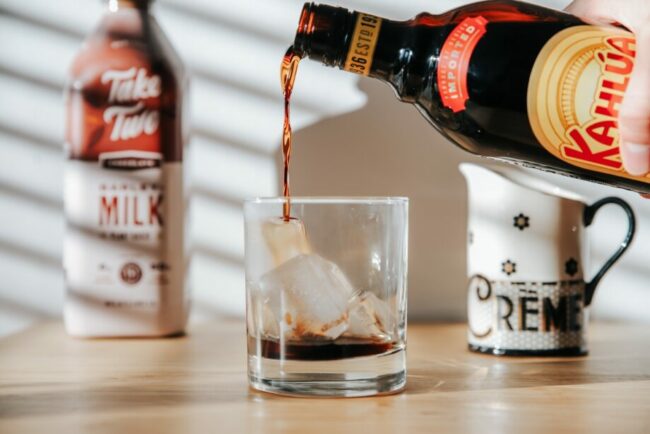 While the product may still be safe to consume after four years, the quality will likely diminish, and your mixed cocktails may taste a bit flat!

What Exactly Is Kahlua?

Famous cocktails for cocktail lovers include the Baby Guinness, Espresso Martini, and Black & White Russian. These beverages have one thing in common: they all include Kahlua.

Kahlua is an alcoholic beverage that originated in Mexico. Kahlua is made with rum, vanilla bean, sugar, and Arabica coffee. This explains why several Mexican sweet delicacies call for this appealing coffee-flavored liquor.

Despite being launched in 1936, Kahlua is still the major component in several exceptional cocktails and pastries throughout the world today.

What Is the Taste of Kahlua?

Unlike whiskey and vodka, which are mostly made of alcohol, Kahlua has a distinct flavor. The predominant flavor of Kahlua may be described as a blend of sweet and fragrant smells. Because of the presence of coffee, it is supposed to taste slightly bitter.

In terms of flavor, Kahlua is frequently likened to Baileys Irish Cream, which similarly has a sweet taste emphasized by hints of fudgy tastes. And, like Kahlua, you may be concerned about whether Baileys Irish Cream will go bad if you purchase this delectable liqueur.

Imagine eating a slab of dark chocolate with a kick of orange peels and a dash of alcohol to describe the flavor of Kahlua. This drink is mild, and I believe it is appropriate for individuals who do not consume much alcohol.

How Long Does Kahlua Last

The shelf life of Kahlua is not as long as that of elemental spirits like vodka or whiskey. However, it is not very brief.

Before we go into specific periods, let’s first find out how to determine the production date. A lot number should be printed on the bottom edge of the label on the back of the bottle. This is what it looks like L5260FJ1033. We’re just interested in the first four digits, 5260.

Of course, the liqueur will not spoil after the specified period, but its quality will begin to deteriorate, and its flavor will fade. As a result, a 6-year-old Kahlua will not be as excellent as a brand-new one.

Please remember that the shorter the indicated shelf life, the faster the alcohol will degrade beyond that date. So, although the Original is likely to be fairly nice after 8 or even 10 years, the Ready-to-Drink mix is likely to taste awful after 3 to 4 years.

What’s the distinction between dying and getting worse?

The expiry date specifies the latest day a product may be consumed safely. These items do not spoil as soon as the expiration date passes, but they have a very short shelf life before mold or bacteria take control.

To summarize, a product should not be eaten after its expiration date.

If you look at a Kahla bottle, you will not discover an expiration date. That’s because it, like other spirits, loses quality, taste, and fragrance rather than becoming bad in the usual sense. In the instance of Kahla, we have a product that “goes bad” over time.

When a product turns poor, it signifies our expectations of that thing have dropped. A product might have gone bad due to deterioration in quality or attributes while still being safe to ingest.

How to Tell if your Kahlua has gone bad

On the market, Kahlua is often sold in closed bottles. How do you tell whether something has gone bad if you keep it in the pantry or the refrigerator? Let’s sort it out together.

It is critical to taste the liquor before using it. An excellent liqueur should be aromatic and retain its greatest quality flavor. If not, the bad Kahlua might ruin the entire drink or meal.

Remember that Kahlua is a coffee-flavored rum liquor. As a result, when you first open the bottle, you must be aware of its odor.

The coffee flavor of Kahlua is well-known. If you can’t detect a strong coffee aroma, the Kahlua has gone out of date. Also, the fragrance of the rum spirit should be strong and noticeable to you.

If you can’t detect any of these trademark features in the fragrance of Kahlua, it’s time to replace the bottle. Because putting a faded Kahlua in your drink is pointless.

Another thing to look for in a Kahlua bottle is its color. Dark black is the color of high-quality Kahlua. In addition, the out-of-date Kahlua has sugar crystallization within the container.

The Kahlua is spoiled if you detect any sugar crystals at the bottom.

Is it OK to consume bad Kahlua?

While drinking old Original Kahlua is unlikely to make you sick, it is likely to be unpleasant. On the other hand, drinking one of the flavored or Ready To Drink forms of the beverage after its expiration date may be a bit dangerous.

Because the different flavored Kahlua beverages and Ready Drink cocktails contain components that are more prone to rotting, such as dairy products, consuming them after their expiration date might be risky. You should pay particular attention to the best-by-date on these beverages.

Remember that, while Original Kahlua may probably be consumed after its four-year best-by date, it will have lost some of its quality and flavor, so it is always better to follow the manufacturer’s advice to be safe.

While there are three versions of Kahla on the market, including the Original, Flavored, and Ready-to-Drink mixes, the storage guidelines are essentially the same.

Begin with an unopened bottle of liquor. Unopened Kahlua should be stored in a dark and cold environment, just like its basis, rum. The pantry or cellar is typically ideal, although a kitchen cupboard may also suffice.

Of course, if you want to refrigerate it, that’s also OK. Put it in the fridge for a few hours before serving since Kahlua is best served cold.

When you open the bottle, always use the original cap to close it. Technically, opened Kahlua does not need to be refrigerated. However, if you use it regularly, such as a weekend drink or two, it’s better to store it in the fridge. This way, you won’t have to remember to cool it before serving it every time.

Is it Possible to Freeze Kahlua?

What happens when you freeze Kahlua is that the texture of your drink is ruined. The reason for this is due to its contents, which include a lot of sugar and rum. Rum’s alcohol will be difficult to freeze, whereas sugar will lump.

As a result, once thawed, it won’t be easy to pour into a glass. Furthermore, this will negatively impact the texture of the beverages you mix using Kahlua. Instead of a ‘liqueurs’ drink readily mixed, you will get a chunked and thick consistency.

If you wish to place Kahlua on ice to chill it down, don’t leave it for longer than half an hour. That way, you’ll get an ideal temperature without damaging the original drink’s properties.

Like any other liquor, Kahlua may be consumed for a long time. However, extreme caution is required to verify that what you are consuming is safe. Always use correct liquor storage techniques.

Kahlua’s distinct flavor is always best savored when it is at its optimum, something you will not be able to do with Kahlua that has been carelessly stored and has gone bad.