Does Sour Cream Go Bad? How Long Does It Last? 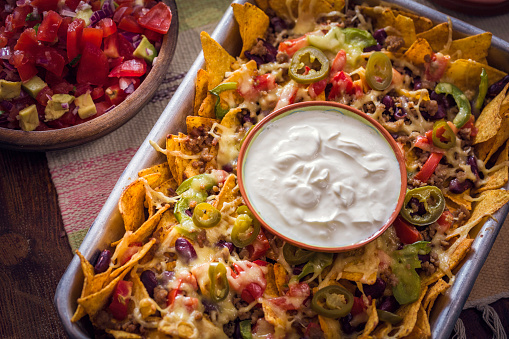 However, for sour cream to last as long as possible, it must be stored properly. This is especially true once the container is opened.

Furthermore, you must understand how to identify whether your sour cream is rotten. You’re certainly aware of the essentials, such as the fact that mold is harmful, but there’s more to it.

This is where this article comes into play. It discusses this dairy product’s storage, shelf life, freezing, and spoilage.

Remember that sour cream is a perishable dairy product made by fermenting dairy cream following lactic acid bacteria action. Bacteria cause the cream to become sour and thick throughout this process.

Sour cream, like any other dairy product, may spoil fast if not kept properly. To safeguard your health, it is critical to understand how to identify a rotten product.

First and foremost, you may have noticed that your sour cream occasionally becomes runny on top. Because this is a natural and safe occurrence, you should merely drain the water before reusing it.

Other alterations brought about by bacteria and fungi might be concerning. As a result, to avoid unpleasant surprises, always check the date on the label.

What Factors Contribute to Spoiling?

Sour cream is made from pasteurized milk, which kills the majority of dangerous microorganisms. It is then fermented by beneficial bacteria, which generate lactic acid, which gives it its sour flavor.

Commercially manufactured sour cream must meet safety regulations; however, handmade sour cream may include a variety of microorganisms.

The protein and carbohydrates in milk serve as a happy culture medium for both good sour-producing bacteria and a slew of hostile bacteria and fungi that might cause sickness.

They can multiply slowly over weeks in the refrigerator or even quicker if you leave your sour cream at room temperature for any time.

You may also unintentionally introduce extra germs and mold when you use your sour cream, either through air exposure or by using an unclean spoon.

How Long Does Sour Cream Last?

Sour cream, like other milk-based goods, has an expiration date. That is the amount of time the business has to sell the shipment. As a result, the product will remain fresh for at least a few days.

If your sour cream degrades before its expiration date, it was most likely mismanaged before reaching the supermarket’s refrigerator. It’s typically not your fault, so don’t be concerned.

When available, sour cream can keep its freshness for up to two weeks. That is, of course, assuming it is properly stored. Because sour cream is naturally sour, it generally keeps its quality longer than other dairy products.

I’ve read online that people frequently store it for a month, and it’s still OK. Feel free to do so, but remember that it’s a bit unsafe, and it’s best to discard sour cream that has been opened for so long.

Also, as is customary, the longer it lies in the fridge, the worse the quality.

Sour cream normally keeps for one to two weeks after its expiration date. Once opened, the container will keep its freshness for up to two weeks.

How Long Will Sour Cream Last at room temperature?

If left at room temperature, sour cream will go bad in 1-2 hours:

Unnecessary exposure to air and heat will hasten the spoilage of the sour cream. If sour cream is left at room temperature, such as a dip at a party, it has around 1-2 hours before it begins to spoil. The hotter the weather, the faster the sour cream will go bad.

How Long Does Sour Cream Keep in the Refrigerator?

When stored in the refrigerator, sour cream can survive up to three weeks over its expiration date: Sour cream should be stored in refrigerators. This holds for both open and unopened containers.

The chilly temperatures are great for protecting the goods from unwanted air and heat. Sour cream should be stored in the back of the fridge, where it is the coolest. Do not store it in the refrigerator door since it exposes the items to air and heat every time it opens.

How Long Can Sour Cream Be Stored in the Freezer?

When kept in the freezer, sour cream can last up to 6 months:

Sour cream may be stored in the freezer, both open and unopened. The flavor will be different, but it will still be safe to ingest. It’s vital to remember that the texture of the sour cream will drastically alter.

When the cream is frozen, liquid separates from it, resulting in a lumpy, uneven texture. Sour cream should only be used in dishes that require baking or cooking after it has frozen. Sour cream will be ineffective in meals that demand a smoother texture.

These are estimated time frames. When manufactured with preservatives, certain brands of sour cream might remain longer. Depending on various reasons, sour cream may deteriorate before or after these estimations.

Why Does Sour Cream Have an Expiration Date?

Sour cream provides an ideal habitat for germs and mold to thrive. These will develop over time, even if refrigerated.

Sour cream can be unsafe to ingest once it has gone bad, which is why it has an expiration date.

It’s crucial to realize that any printed dates on your sour cream aren’t a guarantee — it can go bad before this date if stored improperly, and it may survive a little longer after the dates (except for a use-by date.)

Even if you are taking basic precautions to maintain your sour cream, there may have been times when it was not stored properly during shipping or retail store, reducing the product’s shelf life.

How Long Can Sour Cream Be Stored?

If left out, sour cream will quickly go bad — the higher the temperature, the faster the drop.

There is a two-hour limit for keeping sour cream out at room temperature, which is reduced if the ambient temperature is warmer. You’re better off tossing it after this point.

Pick up a tub after your excursion through the store to help extend the life of the sour cream, and consider keeping a cooler in your car to keep temps even on hot days.

How to Determine Whether Sour Cream Is Bad

The following are symptoms of rotten sour cream:

Also, some surface separation is natural, and you may mix it with a spoon.

Take a look at how this looks:

As is customary, if sour cream appears to be completely good but has been sitting in the fridge for much longer than the stated estimations, it is best to discard it.

What Happens If You Consume Inedible Sour Cream?

As previously stated, sour cream provides an ideal home for many bacteria and mold. These nefarious organisms may thrive even in the refrigerator.

Consuming contaminated sour cream exposes you to the danger of food poisoning, which can be moderate or severe depending on various variables.

If you become ill with food poisoning, you may have stomach discomfort, nausea, diarrhea, and fever. It might appear within a few hours or days of drinking poor sour cream.

How to Store Sour Cream

Sour cream, like other dairy products such as heavy cream or half and half, must be refrigerated. And while the door shelves are a popular spot to store sour cream, they are far from ideal.

Because the temperature in the fridge door swings the greatest, it’s best to store sour cream on the lowest shelf and in the rear.

I’ve read inquiries on the internet regarding how long sour cream can be kept out of the fridge, and there isn’t a decent response. In a nutshell, you should put it in the fridge as soon as possible after purchasing it.

When you open the container, ensure sure it’s always firmly shut. If the sour cream isn’t easily sealable, consider putting it into a mason jar or an airtight container.

This is especially handy if you want to store it in the fridge for a few days. A good seal also avoids drying out and keeps smells at bay.

A rubber band and aluminum foil can be used as a temporary seal.

Because we don’t always use the entire container of sour cream, it’s critical to maintain good food hygiene.

That means you should always scoop sour cream with clean utensils and never double-dip. If you need another teaspoon or two for a recipe, take a clean spoon or wash the previous one.

Is it possible to freeze sour cream?

Sour cream should not be frozen, according to most manufacturers. Sour cream, like buttermilk and many other dairy products, separates when frozen.

While gently beating it will restore some consistency, the outcome will not be as wonderful as fresh sour cream.

That implies freezing sour cream only works for cooked or baked meals.

Sour cream, frozen and defrosted, should only be used in recipes that call for cooking or baking.

If you’re cooking a soup, for example, the changing texture of sour cream won’t make much of a difference because you’ll whisk the dairy product in either way. Using thawed sour cream in baking is similar.

If you’re wondering how to freeze sour cream, consider using an ice cube tray. You can defrost as much or as little as you need this way. Furthermore, the frozen cubes are placed in a freezer bag, which takes up far less freezer space than an airtight container.

Of course, a freezer-safe jar or container would suffice if you don’t want to bother with a tray. Remember to leave an inch of headroom because the sour cream swells somewhat when frozen.

The procedure is quite simple and takes only a few minutes to complete. This is how it works:

There are a few methods for thawing frozen sour cream. Let’s go exploring.

Thawing in the refrigerator

The safest way to defrost any dairy product is in the refrigerator.

Depending on your servings, it can take anything from 2 hours for little cubes to 8+ hours for large containers. The simplest method is to do it overnight.

Place the container in a basin of lukewarm water to speed things up and ensure your sour cream is properly defrosted in the morning.

On the counter, thawing

Nobody advocates this method, and neither do I. Leaving frozen sour cream at room temperature for a lengthy amount of time encourages germs to spread quickly.

I’m sure I’m not the only one who has defrosted anything on the counter due to time restrictions.

If you’re in a hurry, drop the frozen sour cream bottle or bag in a pot of tepid water and set it on the counter. Using hot water will not significantly speed up the process here.

You may speed up the procedure even further by doing the following:

Replace the water as soon as it becomes ice cold, and mix the contents of the jar every 20 minutes or so.

Do it at your peril, once again.

Put it in frozen.

If you have any liquid that is at least lukewarm (for example, while making soup), you may toss frozen sour cream right into the pot and let it thaw there. This method will allow it to thaw considerably faster.

This is your final choice. When possible, thaw the sour cream before using it.

Sour cream that has been frozen and thawed is separated, so you don’t have to worry about it curdling during cooking — it will always be curdled.