Does Soy Sauce Go Bad? Do You Keep It Refrigerated?

Here’s a simple guide on soy sauce storage, shelf life, and spoilage. It will teach you how long soy sauce lasts, if it should be refrigerated after opening, and how to determine if yours is bad.


You’ve had a half-opened bottle of soy sauce for who knows how long and are wondering if it’s still safe to use. 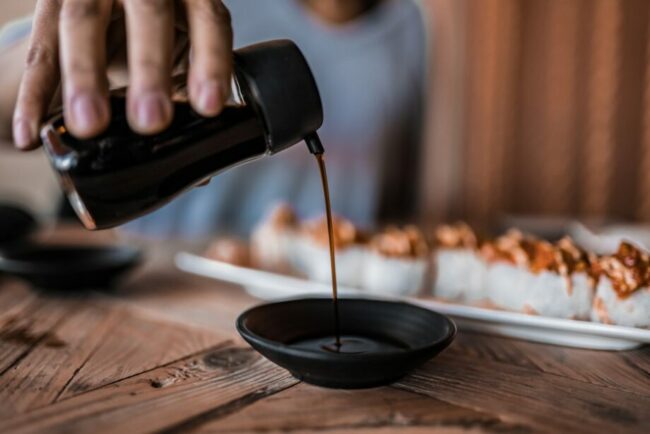 Or perhaps you’ve just opened a bottle and aren’t sure if you should keep it in the fridge or not. Unfortunately, the label says nothing regarding storage, and you want an answer.

Does this sound familiar? If so, this is the article for you.

So, what exactly is soy sauce?

Soy sauce is a popular component used in the production of Asian meals. This product may be found in practically every kitchen.

Soy sauce is made from water, salt, wheat, and soybeans, which undergoes fermentation, brewing, pasteurization, and product stabilization.

It is a salty, brown liquid that is used to season or condiment a variety of meals. It is recognized as an excellent choice for many forms of seasoning.

Soy sauce comes in various flavors depending on the components used, the procedure used to make the sauce, and the place it is created.

Soy sauce contains protein, isoflavones, antioxidants, and a trace of fiber. As a result, soy sauce provides a wide range of health advantages, according to research.

Is it possible for soy sauce to spoil?

Soy sauce does not degrade readily but does not hold its quality indefinitely. An unopened bottle will keep for a couple of years beyond the printed date, but once opened, you’ll get approximately a month of superb quality if you store the condiment at room temperature and maybe half a year if you keep it in the fridge.

However, your soy sauce will still be entirely safe to use but significantly less flavorful after that time.

That implies that if you have an old open bottle that has been lying in storage for months, the best thing to do is taste it if there are no symptoms of rotting (more on that in a moment).

Soy sauce will not rot “as long as no water or other ingredients have been added,” according to the Kikkoman website. That is, keeping it securely covered almost prohibits it from going bad.

Let’s imagine you saw some yeast-like floaties in your soy sauce and chose to investigate before dumping the condiment. Good for you because they do not taint soy sauce (but may alter the flavor).

Allow me to explain.

What are those White floating things?

This white floating object is film yeast, which can develop even in extremely salty settings (such as soy sauce). Although this film yeast does not cause food poisoning, it may alter the flavor and fragrance of the sauce.

Here’s how to deal with the white floaties problem:

First, remove the white floaties from the sauce using coffee filters or something similar.
Examine the taste. Continue to use your soy sauce if it tastes good after you remove the film yeast. If not, throw it away.

As soon as you discover the white floating object in the sauce, remove it. The longer it remains, the more likely it will degrade the quality of the condiment.

Now that we’ve gotten that out let’s speak about the real indicators of soy sauce deterioration.

The answer will vary depending on the type of soy sauce and how it is stored.

Soy sauce is created from roasted wheat and soybeans infected with Aspergillus mold or koji. It can be done in either Chinese or Japanese manner. Unopened soy sauce can keep in your cupboard indefinitely. An opened bottle will keep its finest quality in your kitchen for six months and may be refrigerated for two to three years.

Shoyu is just the Japanese term for soy sauce. It’s often produced with 50% fresh soy and 50% wheat, giving it a sweeter and more refined flavor than its Chinese equivalents. It can be bright (usukuchi) or dark (usukuchi) (koikuchi).

Tamari, which is also Japanese, is a byproduct of miso manufacture. It’s created from soybeans and has a flavor comparable to the Chinese style. Gluten-free soy sauce is another name for it.

Shoyu and tamari are naturally fermented and brewed soy sauces that can spoil faster than traditional soy. However, they can survive up to two years if kept unopened and in a cold, dry area. Their peak taste can only last around three months once opened, but they are still safe to use for much longer.

The contents in various varieties of soy sauce, as well as the procedures of brewing, fermenting, pasteurization, and stabilization, all contribute to its spoilage resistance. The natural fermentation process typically takes a few months; however, some brands add preservatives and additives to speed up the process.

Yes, they ultimately go bad. For example, suppose you open your packet drawer with Mcdonald’s ketchup and Taco Bell sauces. Those small packets usually mount up, and people seem to forget about them until a critical quantity is reached.

How to tell if your soy sauce has gone bad

Give your soy sauce a thorough whiff and a good look to see whether it’s ruined. Look for strange, weird, or overpowering odors, changes in color or texture, and anything on the surface, such as mold (except film yeast, which you can remove).

Whether your soy sauce looks and smells OK, taste it to see if it’s good enough to use.

To perform those above efficiently, you must first understand how soy sauce evolves.

The most significant changes are in color and taste. The color intensifies over time, while the taste fades away.

Of course, if the flavor is a little weaker than it used to be, a little additional soy sauce typically fixes the problem. (Simultaneously, it helps you use it up faster.)

However, if there is little flavor or it tastes terrible, it must be discarded.

Finally, if you’re not certain that your soy sauce is safe to consume, err on the side of caution and dump it, especially if you did not use proper storage techniques.

Is it possible to become sick from outdated soy sauce?

Condiments often carry a best-before or best-by date rather than an expiration date, which means you may still use your soy sauce if it is properly preserved after that date has passed. The best-before date is only a guideline for how long the product will be at its best.

It will not make you sick if it is not polluted, although the flavor may be greater. As previously said, put it in the refrigerator to keep the flavor at its finest for as long as possible.

Use by date vs. best by date.

Like coffee, cinnamon, and chili peppers, soy sauce may be stored forever but can lose flavor.

This is what the ‘best by date means: the amount of time the taste will be at its peak. If you open it beyond the ‘best by date, the flavor will be muted or entirely off, depending on the storage circumstances.

You should be aware that there are two types of soy sauce: fermented (traditional) and hydrolysis soy sauce.

Fermented soy sauce has a richer flavor but loses flavor faster than hydrolysis soy sauce, so keep that in mind.

Is it possible for soy sauce to spoil if it is not refrigerated?

No. It does not need to be refrigerated even after it has been opened. It may be kept at room temperature. However, refrigerate if you want to preserve its flavor for longer.

Because of its high salt content, an opened bottle will remain at room temperature for a few months. According to the producer Kikkoman, it will not deteriorate if no water or other ingredients are added, even if it is not refrigerated.

Is Soy Sauce Required to Be Refrigerated?

You don’t have to refrigerate soy sauce, but it’s a good idea. Soy sauce keeps its finest quality for at least a few months if refrigerated, but only about a month if left at room temperature.

In other words, if you’re not a big fan of soy sauce and don’t use it much, it’s generally best to store it in the fridge.

Furthermore, well-known manufacturers such as Kikkoman and Kamada recommend refrigerating their soy sauces after opening to ensure optimum quality preservation.

However, if you leave your soy sauce out of the refrigerator, nothing untoward should happen. As I mentioned in the spoilage section, soy sauce should be fine to use even if it isn’t in the fridge.

The worst-case scenario is that its quality will deteriorate faster, requiring you to visit your local grocery shop and purchase a new bottle sooner than you’d want.

Is it possible to freeze soy sauce?

First and foremost, it is unnecessary to freeze soy sauce because it is so long-lasting.

However, the answer to the question “Can you freeze soy sauce?” is no. The reason for this is that it is high in salt, and salt does not freeze.

That’s why, when it snows, local governments throw salt all over the roadways.

Not only does it melt ice, but as more snow falls, the chemical components in salt prevent it from freezing below a specific temperature.

This is why icy roads that have been salted are usually mushy.

What is the best way to preserve soy sauce at room temperature?

Like olive oil and coffee beans, soy sauce should be kept from heat and direct sunlight. Because light and heat deteriorate its quality much faster, a cool, dark cupboard is a better nesting choice than near your cooktop or on the window sill. If you bought a gallon jug of the stuff, we recommend decanting it into a smaller container and keeping the rest in the fridge (you know, if it will fit in there).

An unopened bottle of soy sauce requires a cold, dry location, such as a kitchen cabinet or a pantry shelf.

If you open the bottle, whether you refrigerate it or not, you should keep it well sealed while not in use.

Finally, if you want room-temperature soy sauce on hand but are concerned about its quality, consider decanting it.

Keep your main bottle in the fridge and a smaller container at room temperature with enough soy sauce for a couple of weeks.

This approach is a bit of a pain, so I only recommend it if you use soy sauce frequently.

Otherwise, place the bottle in the refrigerator and discard it. You may always start with a couple of tablespoons and wait 15 minutes for the condiment to get to room temperature.