How Do Dolphin Sleep?

Dolphins sleep in unihemispheric sleep, which means they only sleep half of their brain at a time. One half of the dolphin’s brain is always awake, allowing the other to slumber deeply.


And if you’ve ever had the desire to sleep with one eye open, you share a trait with these incredibly clever creatures. 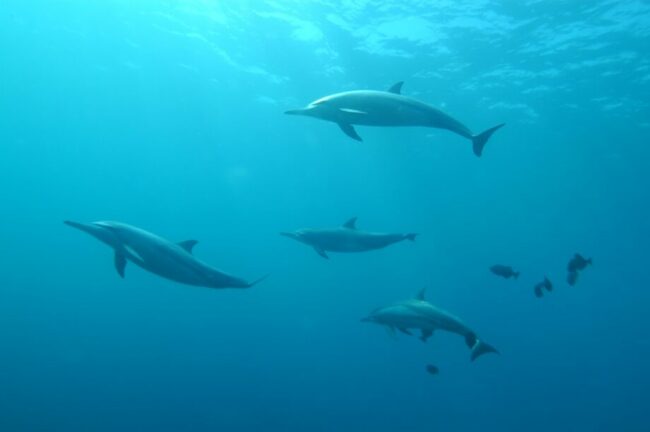 During sleep, the eye opposite the sleeping side of the brain remains open. The other eye is shut. This type of sleep helps the dolphin to remain conscious long enough to reach the water’s top and replace its lungs with oxygen without drowning. It’s also a strategy to keep predators at bay.

Dolphin calves are particularly susceptible to huge marine predators such as sharks; therefore, unihemispheric sleep aids in the preservation of life. Furthermore, the calves need to be close to their moms to nurse; thus, the half-awakened condition allows them to stay nearby and feed as needed.

One research with bottlenose dolphins discovered that during the first month of a calf’s existence, he and his mother stay up 24 hours a day. As the calf matures, the pair might begin to sleep in their unihemispheric rhythms.

Dolphins sleep either by resting still at the surface of the water and breathing frequently or swimming extremely slowly and steadily close to the surface. Dolphins in shallow water will occasionally sleep on the seafloor before emerging to the surface to breathe.

While sleeping, dolphins are alert.

Dolphins can remain attentive for lengthy periods due to their unihemispheric sleep habits.

The research done in 2012 by Brian Branstetter and colleagues found that dolphins can stay attentive for 15 days straight and complete another activity. The study found that the dolphin could do the same task for an extended amount of time while sleeping in “dolphin sleep.”

They can only use half of their brain at a time.

Dolphins sleep by resting just half of their brain at a time. This is known as unihemispheric sleep. The brain waves of sleeping captive dolphins demonstrate that half of the dolphin’s brain is “awake” while the other is in a profound sleep known as slow-wave sleep.

Also, the eye opposite the sleeping portion of the brain is open at this period, while the other eye is closed.

Dolphins sleep in pods or with companions to protect themselves.

Adults and young dolphins swim in pods to lessen the risk of being preyed on. They may sleep close to one another or take turns sleeping while companionable animals couple up for safety from predators who may perceive them as easy captures if they are alone! A sleepy newborn is a prime target for illness, damage, or drowning.

What is Echelon Swimming

When marine animals, such as dolphins, sleep and swim simultaneously, they are in a condition comparable to napping. Young dolphin calves feed, relax, and sleep while their mother swims beside them in her slipstream. Technically, this is referred to as echelon swimming.

The mother dolphin will also sleep on the move with her young during these periods.

Many of you may be surprised to learn that mother dolphins cannot stop swimming for the first several weeks after giving birth to a baby dolphin. If the mother does try to stop at regular intervals, the calf may sink since the newborn dolphin does not have enough body fat to keep it afloat.

Dolphins, do they sleep with their eyes open? Why?

The dolphin employs its alert side to maintain watch while napping, which might be related to a need for protection. Dolphins, unlike humans, only shut down half of their brain while they sleep, not both!

This allows them to make sharper maneuvers or escape fast if required by effortlessly switching between multiple systems depending on whatever duty has to be completed the most urgently (like watching for predators).

It also indicates when it is time to climb to the surface for a fresh breath of air. After about two hours, the animal will reverse the process, sleeping the active half of the brain and waking up the rest.

How many times do dolphins sleep in 24 hours?

They can generally go to bed and wake up whenever they want, but only for a couple of hours at night before needing another quick nap in between all of their daytime activities; this pattern may be because these animals are primarily active late into the evening while feeding on seafood, where deep sea creatures are most abundant.

According to EEG data, bottlenose dolphins spend an average of 33% of their time sleeping on any given day. Scientists aren’t sure how to classify cetacean sleep patterns, although it appears they may engage in something known as “dream sleep.”

Rapid Eye Movement (REM) is common in deep sleep, as evidenced by a pilot whale that experienced six minutes in a little over one night!

How long can dolphins sleep while holding their breath?

Cetaceans are fascinating creatures. Dolphins, for example, may take 8 to 12 breaths per minute when active, only to have their respiratory rate drop to 3 or 7 when resting!

Dolphins can hold their breath for 8 to 10 minutes, as we well know.

A marine animal does not “drown” since they do not breathe underwater but does suffocate from a lack of oxygen.

How do dolphins sleep, so they don’t drown?

So how do they sleep without drowning?

Bottlenose dolphins in aquariums and zoos, as well as whales and dolphins in the wild, sleep in two ways: either lie peacefully in the water, vertically or horizontally or sleep while swimming slowly close to another animal.

Individual dolphins also sleep deeper, primarily during the night. The term “logging” refers to the appearance of a dolphin in this state, which resembles a log floating on the water’s surface.

How do dolphins breathe?

Dolphins are mammals, which means they breathe air into their lungs as humans do. They cannot breathe underwater like fish because they lack gills. They breathe using blowholes, which are specialized nostrils positioned directly on top of their skulls.

When a dolphin breathes, the air enters straight into their lungs; exhaling and inhaling take only a fraction of a second, and they take approximately 2-3 breaths per minute on average.

When divers ascend from deep waters too rapidly, dissolved nitrogen in the blood creates bubbles that can cause severe muscular discomfort, paralysis, and, in extreme circumstances, death.

Deepwater human divers, as well as other diving animals, face significant danger, however, not for dolphins.

Dolphins lower their need for oxygen when diving. Their heartbeats get slower, and blood volume throughout the body diminishes. Only vital organs such as the heart and brain receive oxygen-rich blood flow during a deep dive. There is evidence that they can control the heart rate and the volume of blood pumped out of the heart per minute.

The lung anatomy of marine animals reveals two pulmonary regions: one air-filled and one deflated. According to the researchers, blood runs mostly through the collapsed part of the lungs.

Therefore, dolphins may manage gas exchange between their lungs and blood to manipulate the quantity of nitrogen entering their circulation and prevent decompression.

We are involuntary breathers; we breathe even when we are unconscious. Dolphins, on the other hand, are voluntary breathers; they must make a deliberate decision to inhale air. This means that dolphins never fully sleep since their brains must be engaged enough to commence breathing at all times.