How Long After Spraying Raid Is It Safe For Babies And Why?


People have to cope with a plethora of pests and insects. Mosquitoes, cockroaches, bed bugs, and other insects cause severe infections or bite the skin, producing a variety of skin and other issues. 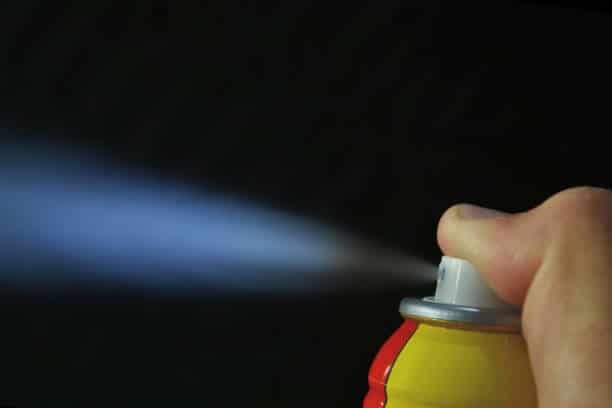 Pesticide sprays or other sprays are commonly used to control such insects. Raid is a typical spray used to kill or eliminate pests and insects in the home.

However, these sprays are also hazardous to one’s health. When sprayed, they can have a strong odor and harm the lungs. In addition, sprays like Raid are incredibly harmful to newborns, and they should be kept away from the spray while it is being used.

What makes Raid Harmful to Inhale?

According to Johnson & Son, the firm behind Raid, the pesticide is reasonably safe if used according to the directions on the package. However, as some have demonstrated in recent years, you can’t always bank on that being the case.

Raid uses a powerful blend of chemicals that can be dangerous to people to adequately address the issue of bugs, creepy crawlies, roaches, and ants in the home. Although people can quickly inhale the material during the spraying procedure, extended exposure can be hazardous to one’s health.

Cypermethrin is a common element found not just in Raid but also in other pesticides, and it may be dangerous if ingested over an extended period. Inhaling cypermethrin can cause severe coughing, congestion, shortness of breath, lung issues, and even asthma episodes.

Please remember that the longer someone is exposed to cypermethrin, the more likely they may have lung difficulties. This illustrates why you should always spray outside the room when everyone is out.

Raid includes additional compounds and cypermethrin that can be harmful if breathed. Some of the adverse effects of breathing Raid’s other ingredients are sneezing, dizziness, headaches, and skin irritation.

To stay on the safe side and avoid insecticide-related health problems, it’s critical to give Raid ample time to settle, dry, and kill the insects.

What Happens If You Inhale Raid?

Most individuals who have used Raid understand what happens when you inadvertently breathe it in. First, you cough, go to the sink, splash water on your face, and gurgle some more for good measure. Following that, you may suffer shortness of breath and congestion, but these symptoms should subside within a few minutes.

And it doesn’t always end there. In addition to discomfort, headaches, sneezing, and dizziness, there are other possible negative effects of breathing or eating pesticides. As previously stated, some people have willingly ingested Raid to become high. Aside from death, which was the end outcome in many of these cases, those persons also went through:

Repeated, persistent, and purposeful pesticide exposure can lead to brain damage and loss of consciousness. Still, it’s safe to conclude that these more catastrophic repercussions of pesticide poisoning are only possible if you don’t heed the instructions. So, let’s see what the product label says regarding today’s major topic.

Is it safe for babies to be around after spraying Raid?

Allow fresh air into the treated room or area after using Raid® spray products such as Raid® Mosquito and Fly Killer! Next, exit the treated area and close the door for 15 minutes. Then, before re-entry, properly ventilate the area. More extensive instructions may be found on the product label.

Check your window and door screens to ensure that no pests are getting in while you ventilate.

However, the mist is dispersed throughout the air when these sprays are used. Even if the spray is applied to a surface rather than sprayed into the air, the particles of the spray combine in the environment within the house.

Furthermore, these sprays are poisonous. The usage of the sprays is even mentioned on the spray cans. The container is labeled with a warning that the solution within is harmful. It also advises against bringing children or animals near the can.

It is now strongly advised that when using the Raid spray to get rid of insects in one’s home, one should ensure that there are no newborns around.

Why Does It Take So Long For Raid’s Effect To Disappear?

The sprays are all created from liquid substances. The chemical is released as liquid particles when we use a bug or insect spray to get rid of insects and bugs. Most of these particles adhere to the surface on which they are sprayed.

However, certain particles are also mixed with the air. Because these particles are so small, they quickly combine in the air and spread everywhere.

The liquid particles usually take 15 to 30 minutes to dry entirely. When they dry out, the youngsters are generally safe. Because little children may touch or play with the damp surface without realizing the dangers,

Furthermore, when the spray is applied once, its impact and odor are much more noticeable in the air and on the surface. Once a result, as the liquid dries up, its efficacy diminishes significantly. Because it takes 15 to 30 minutes for the spray droplets to dry, it is stated that after applying Raid spray, children are safer after 15 to 30 minutes.

Furthermore, it is advised that spray cans be carefully stored. Keep the cans well sealed and out of reach of youngsters. Children are oblivious to what is detrimental to them. They have the potential to damage the spray can and come into close touch with the chemicals contained within it. As a result, they can be severely harmed by the chemicals, which can induce several hazardous ailments.

Tips for Using Raid and Other Insecticides Safely

Read the label at all times.

Before spraying this pest control solution, check the label to find out how long it takes for Raid to dry. If you use something other than RAID for this purpose, the precautions and instructions for use may change. As a result, it is essential to read the label before using it to eliminate all sorts of pests and insects in your house or area.

Allow RAID to dry naturally after spraying it. Then, before re-entering the room, close it for at least 15 minutes and thoroughly ventilate it to eliminate any adverse effects from the air. In the event of children and pets, follow the directions on the label.

However, before ventilation the room, ensure that a screen properly secures its windows and doors to prevent bug re-infestation in your house.

Allow Children to Play Outside

When spraying children’s rooms, special measures must be used. If spraying is not possible during the school day, ensure your children play outside on weekends.

Sprayed rooms should be left to dry, and youngsters may struggle to follow simple directions like staying outside the rooms.

Adults should also avoid sprayed rooms to reduce the danger of breathing hazardous odors. Rooms that have been intensively sprayed should be avoided for at least 3-4 hours following spraying.

After the insecticide has dried, always ventilate the rooms.

While it may be tempting to enter the room and spend time there once Raid has dried, opening windows and allowing for air is strongly advised.

Fresh air is the ideal antidote to Raid’s poisonous toxins. And the longer you leave the windows open for ventilation, the better it will be for everyone in your home.

Exposed food and utensils should be removed or covered.

It would be best to exercise extreme caution when using Raid in the susceptible kitchen area. Before spraying, make sure all utensils and exposed foods are covered. If you want to make a thorough spray job in the kitchen, it’s preferable to relocate the utensils and edibles until the pesticide has wholly dried and cleansed.

Contaminated goods should be discarded since they might cause poisoning and other health problems if consumed.

It would be best to aim to spray as far away from the walls and other kitchen equipment as feasible. But don’t be afraid to approach cracks and other holes that might be home to roaches and other unpleasant insects.

Disinfectant and water were used to clean up.

Once you’re sure that all the targeted insects have been killed, it’s time to go on to the next stage, thoroughly cleaning the room.

Clean the room with a pail of water and some laundry soap or a disinfectant. Don’t only clean the visible parts of the room. Instead, target all areas, including walls and the floor space behind heavy furniture, because most insects seek refuge beneath beds and chairs.

To get rid of harmful chemicals, you should also clean all the clothes exposed while spraying the Raid.

Keep Raids out of the reach of children.

The last thing you want is for your children to turn the potentially dangerous Raid into a toy.

As a result, make it a practice to keep Raid in hard-to-reach places where youngsters cannot get it.

You should also follow suitable disposal procedures. Because these aerosol cans are dangerous and high-risk, they should be properly disposed of (not burnt) once the contents have been exhausted.

Is it safe to sleep in a room that has been sprayed with Raid?

Unfortunately, spending the night in the room, you have just sprayed with Raid is not advised.

However, there are several considerations to examine before leaping to conclusions since Raid comes in various forms, some of which are not dangerous to people.

Again, the dangers connected with pesticide use are determined by the product’s composition. Because they let you target and remove one bug at a time, some Raid products are suitable for small-scale spraying.

If you merely sprayed Raid once or twice to target a specific bug, you won’t need to leave the area to let the vapors settle. However, even if you spray directly on an insect, wipe it up with soap and water afterward. This will aid with the removal of any dangerous residue, fumes, or chemicals.

Insects are a frequent yet severe issue for everyone. They carry infections and make people ill. Raid is one of the most often used insecticides.

It is unsafe for newborns to be in a room where Raid or any other insecticide is applied.

Typically, the spray’s impact takes 15 to 30 minutes to wear off.

Toxic substances may be present in the spray, which is sprayed on the surface. The particles were then dispersed around the room by the air. The chemical particles dry up in 15 to 30 minutes, making the space safe for newborns.