How Long After Taking Toradol Can I Take Ibuprofen?

Home  »  Health   »   How Long After Taking Toradol Can I Take Ibuprofen?

Ibuprofen and ketorolac should not be taken at the same time. Combining these drugs can raise your risk of experiencing gastrointestinal side effects like ulcers, bleeding, inflammation, and, very rarely, perforation.


Since we can see drug interactions between these compounds, such chemical combinations should be avoided. Ibuprofen and Toradol are two examples of nonsteroidal anti-inflammatory drugs (NSAIDS). 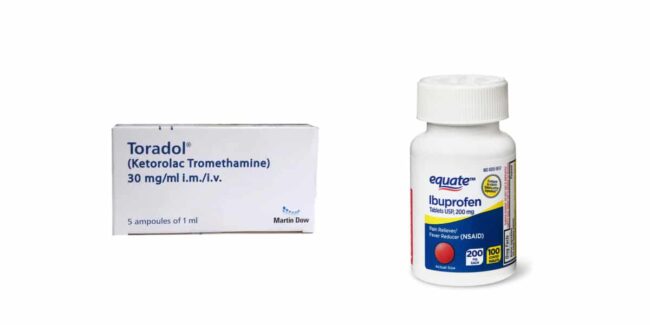 If consumed on the same day, they could damage our bodies. Normally, there should be a minimum of 24 to 30 hours between using Toradol and Ibuprofen.

Ibuprofen and Toradol (Ketorolac) are examples of NSAID medications. Nonsteroidal Anti-Inflammatory Drugs are known as NSAIDs. They include substances that can alleviate various types of pain. They differ in dose, applications, effects, and mode of ingestion.

What is toradol (Ketorolac)?

Toradol is an NSAID that is comparable to over-the-counter medications like ibuprofen (Advil, Motrin), naproxen (Aleve), and naproxen sodium (Naprosyn). Still, it is stronger and needs a prescription, unlike the others.

It Is beneficial for individuals who require short-term, moderate-to-severe, acute pain treatment.

Five days in a row is the maximum that it should be used. Despite being a potent painkiller, it carries a high risk of stomach ulcers, kidney issues, such as kidney failure, and Gastrointestinal bleeding when administered for an extended period.

The original brand-name drug Toradol, which comes in pills and injection forms, is no longer available on the market.

What are the side effects of Toradol?

Like many drugs, Toradol has a range of potential side effects. Exact side effects vary based on how you take it, but frequent ones include:

How should Toradol be taken?

Toradol comes in tablet form (10 mg) and solution form (30 mg/ml) and can be administered intravenously (IV) or intramuscularly (IM). Toradol solution is taken as a single 15–60 mg dose every six hours, with a daily maximum of 60–120 mg.

One to two Toradol tablets first, then one tablet every 4-6 hours, with a maximum daily dose of 40 milligrams, is the recommendation for oral dosage. No more than five days should be spent taking Toradol.

What are the side effects of ibuprofen?

Ibuprofen could have negative side effects. If any of these symptoms are serious or do not go away, let your doctor know right once:

Ibuprofen may result in stomach or intestine ulceration, and these ulcers could bleed. Sometimes ulceration happens without stomach pain; due to bleeding, the only symptoms or signs of an ulcer could be weakness and lightheadedness when standing up (orthostatic hypotension) along with black, tarry stools.

Due to the bleeding, ulceration can occasionally happen without causing stomach pain, and the following are the sole symptoms or signs of an ulcer:

NSAIDs decrease the blood supply to the kidneys and compromise renal function. Individuals who already have compromised renal function or congestive heart failure are more likely to experience the impairment; hence NSAID use in such patients should be undertaken with caution.

How should ibuprofen be taken?

The recommended prescription of Motrin (ibuprofen) should be modified to meet the needs of each patient, although it shouldn’t go beyond 3200 mg per day.

Smoking and drinking can cause more negative side effects. It has not been proven that children can take Motrin safely. Ibuprofen may harm an unborn child; however, this is unknown.

Nonsteroidal anti-inflammatory medicines (NSAIDs), ketorolac, and ibuprofen (Advil) treat different kinds of pain. Ketorolac is used to treat, for a short period (up to 5 days), fairly serious acute pain that would otherwise need drugs. Ibuprofen, in comparison, is used to treat mild to moderate inflammation, fever, and pain brought on by a wide range of illnesses.

However, combining these medications can have several harmful impacts on anyone’s health.

If you really must take these two medications, be cautious about giving yourself enough time between doses because they have several drug interactions. Consult your doctor right away if you suffer a severe side effect.