How Long Can Alligators Live And Why?


Alligators are incredible creatures. They have been alive for millions of years and are as nearly viewing a living dinosaur as humans can ever. 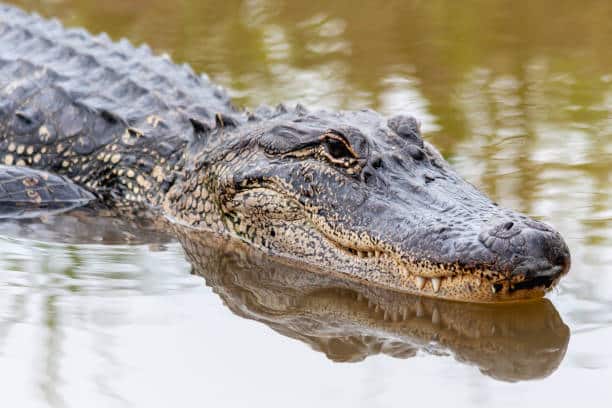 So, how and why have they lasted this long? They are virtually ideal creatures for their habitat, which includes Florida, Georgia, Alabama, and Louisiana in the United States.

Alligators are crocodile-like semi-aquatic reptiles with strong teeth. Alligator is derived from el Lagarto, the Spanish word for lizard. As a result, it was given the name alligator by early Spanish explorers and settlers in Florida.

According to the Florida Fish and Wildlife Conservation Commission, crocodiles have slender, pointed snouts, a grey-green tint, and both upper and lower teeth showing when the animal’s mouth is closed (FWC).

Crocodiles and alligators seldom overlap in range, so knowing where you are might help you tell them apart.

According to National Geographic, American alligators, which reside across the southern United States, only overlap with American crocodiles near the southern point of Florida. Chinese alligators are the only crocodilians found in their vicinity.

Despite their similar appearance, the Chinese alligator is significantly smaller and has more bony plates than the American alligator.

An alligator lives the same amount of time as a person. They have a life expectancy of at least 75 years. They may even live to be 100 years old in rare situations.

Alligators, unlike crocodiles, are not the longest-living reptiles. An alligator’s life duration varies depending on species, gender, and region. According to studies, alligators in captivity live at least 10 to 20 years longer than those in the wild.

An alligator may live for 30 to 75 years, depending on the species and gender. Another factor influences how long alligators live, whether they are kept in captivity, in zoos, or the wild.

What Is the Life Expectancy of a Baby Alligator?

Baby alligators, known as hatchlings, are much more vulnerable to predation. Hatchling mortality rates have been reported to range from 22% to 60%. For the first year, they remain in ‘pods’ and are usually safeguarded by the mother.

Hatchlings are prey for several species, including raccoons, wading birds, otters, and fish. Larger alligators may pose the greatest threat to their survival.

The death rates up to maturity clearly show the proportion of alligators included in the alligator lifetime statistic. There are two sets of figures on the death rate from here: those in the wild and those in captivity.

It should be emphasized that measuring the lifetime of alligators in the wild is very difficult since wild animals seldom live to their full potential age and cannot be documented as precisely as those grown in captivity.

Furthermore, this is an issue that has not been substantially researched, and even the most credible sources have significantly disparate numbers.

Most estimates put the alligator’s lifetime in the wild at 35-50 years and up to 65+ years in captivity of the surviving alligators.

Larger alligators that have exhibited survival persistence are nonetheless vulnerable to cannibalism and intraspecific warfare. Human hunting is the most common cause of death for adult alligators.

Why do alligators have such long lives?

Humans are another menace to wild alligators. Humans have killed and harassed alligators for their hide and habitat for decades, significantly reducing their life expectancy.

Only 30 years ago, the American gator (Alligator mississippiensis) was listed as an endangered species on the verge of extinction. People considered them as hazardous pests on swampland that might be drained and exploited, and they cruelly slaughtered numerous animals.

Another element influencing alligator longevity is their poor vision. To traverse the waters, alligators depend on their hearing. These ears pick up on little vibrations in the water.

On the other hand, human activities cause many water disruptions. Alligators’ ability to flee predators is hampered as a result, and their life expectancy is reduced.

Alligators have repopulated as a result of state and federal regulations protecting them.

Furthermore, increasing sea levels due to climate change create pollution of freshwater bodies with saltwater intrusion or inundation, which endangers alligators since they are environmentally sensitive.

Alligators may remain in captivity for a long time since they have no predators or competition.

Furthermore, these animals are in excellent health due to the availability of high-quality food and regular health checks. Zoos hire physicians to check them regularly to detect any ailment early on, hence extending their life expectancy.

How Long Can An Alligator Go Without Getting Hungry?

Alligators are cold-blooded creatures with very sluggish metabolisms that enable them to spend months, and in extreme cases, even 2-3 years, without eating.

Fasting is, in fact, something they do every winter. During cold weather, gators enter a hibernation-like condition known as brumation, which effectively shuts down their whole body and keeps them alive without wasting energy.

Even though alligators have a varied diet, it mostly comprises easy-to-catch food such as fish, birds, turtles, snakes, and other mammals, as well as fruits, dead animals, and other reptiles.

Gators consume a lot of food, yet they don’t need to eat all the time due to their biological makeup. They may readily subsist on very little or no nourishment.

Why can an alligator go for such long stretches without eating?

The fundamental reason for this is that they are cold-blooded creatures. This implies they cannot regulate their body temperature on their own and must rely on other sources to warm up or cool down.

Warm-blooded species must be fed constantly because they convert up to 80% of the food they consume into energy to keep their bodies warm. Because cold-blooded animals cannot do so, their metabolic rate is extremely sluggish, and they do not need frequent feeding.

Their metabolism digests food slowly and will retain more than 60% of what they consume and utilize that energy to live in the future, whenever required.

Aside from the ability to produce cold blood, alligators may also decrease their heart rate and limit blood supply by immersing in water and increasing them by rising. This enables them to regulate their metabolic rate and minimize energy loss during times of crisis.

Alligators are semi-aquatic creatures that may outlive humans. They may survive for tens of years after overcoming great adversity at the start of their lives.

Human activity is one of the factors contributing to their shorter life span. Greed has caused people to ruin their habitats and kill alligators for their hide, reducing an alligator’s life span. As a result, engaging in activities that do not endanger other animals is important.