How Long Do Alternators Last? Why? Cost to Replace

The durability of an alternator may differ according to electrical specialists and vehicle manufacturers. As a result, the answer to the question of how long alternators last is 6 to 8 years.


It also depends on the vehicle type, and the number of miles traveled. The heat produced by the engine also causes the vehicle’s components to wear out faster. 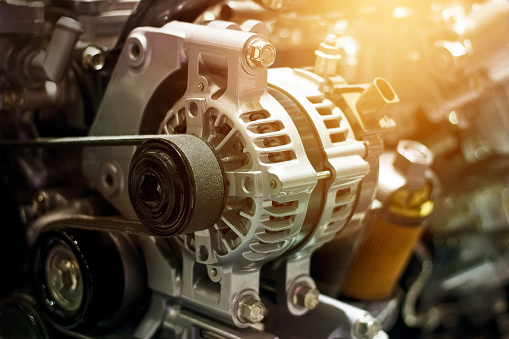 How Long Do Alternators Last?

What Exactly Is an Alternator and What Does It Do?

The alternator is the component of your car’s charging system that keeps your battery charged. The alternator is essentially a generator that converts mechanical energy into electrical energy, which is then used to power various components in your car.

What Is the Function of an Alternator?

The engine’s crankshaft turns the serpentine belt, which rotates a pulley on the alternator. The alternator then produces alternating current (AC) voltage by using electromagnetic induction (magnets revolving inside a ring of copper wire).

Why do alternators last so long?

The alternator in an automobile is critical. It uses engine power to recharge your battery, keeping it from losing energy and eventually dying. It also powers electrical components in your vehicle, such as lighting and navigation systems.

The alternator’s principal duty is to keep the battery charged and, eventually, alive since when the battery dies, all of your vehicle’s electrical components lose electricity.

Previously, the alternator’s function was confined to powering your lighting and a few basic electrical gadgets like your radio. On the other hand, modern automobiles come with a wealth of alternatives.

For example, GPS navigation and entertainment systems use a lot of power, and you’re probably also getting onboard navigation, power windows, power mirrors, and heated seats. These devices together consume a significant amount of your alternator’s power.

An alternator’s job is to provide electricity to the battery to keep the automobile running. To extend the life of your automobile alternator, you should get it examined regularly.

You should inspect the alternator for oil leaks and avoid adding low-quality aftermarket accessories that might overload the alternator. Overtightened belts can potentially damage alternator bearings.

Common Causes or Symptoms of an Alternator Failure

The charging system may indicate that anything is amiss with the alternators. Your headlights are dim, your engine won’t start, and your gadgets might not work. Car starts are tough if your battery is drained, and you may need to jump-start your vehicle. The first thing you should do is test the battery.

Under excessive electrical load, the alternator strives to create enough DC, and the rectifier’s diodes will become hot. You may sense a burning odor emanating from the alternator region. Touching the alternator should be avoided since the housing may be hot enough to burn your hands.

The check engine light should appear if the alternator fails or the battery is drained. If your vehicle has a separate charging system warning light, it should also illuminate. Check that the serpentine belt is still in place and that the alternator pulley is spinning.

Do not turn off the engine since the battery may have lost its charge and may not have enough power to restart it. Drive your car to a facility where it may be inspected, and the alternator replaced.

When your headlights do not beam as brilliantly as they typically do, this is a solid indicator of a problem with the charging system. They may also pulse from dim to brilliant in response to changes in your engine’s RPM levels. These are symptoms of a failing alternator, and it is most likely time to replace it.

Drive your car to a repair shop before it completely shuts down and cannot be restarted. Often, fading lights are caused by your car’s alternator or an electrical power problem with the cables.

If any or all of these cease working or only operate sporadically, there may be an issue with the charging system that worsens as the battery discharges. When you start your automobile, you may realize that the windshield wipers are not operating properly.

Also, if you are having issues with your vehicle’s electrical system, you will most certainly discover a problem with the alternators. These electrical components will drain a lot of power from the battery, causing it to lose its charge.

How Can I Tell If My Alternator Or Battery Is Faulty?

In its most basic form, starting and operating an engine consists of three steps: the battery first gives a burst of energy to the starter motor, which powers up the vehicle.

In turn, the engine drives the alternator, which recharges the vehicle’s battery.

If you’re unsure if you have a faulty battery or if your automobile alternator needs to be replaced, jump-start it. If the engine starts but stops, you have an electrical problem, which means the alternator isn’t charging the battery.

If your car starts and runs, but you can’t start it again using its power, you most likely have a faulty battery.

Consider purchasing a voltmeter instead.

The electrical difference between two locations on a circuit is measured using a voltmeter. A voltmeter might be the simplest way to tell if you have a defective alternator.

Can I drive if my alternator dies?

Technically, the automobile can still operate, but only for a limited time because it is powered by the electricity stored in the battery. You might be able to obtain a short starting with jumper wires from a friend or friendly stranger, but the car won’t survive long with a failing alternator.

Driving in this manner is also exceedingly risky. Because a car with insufficient electrical power does not have enough “food” to feed numerous required components to start it, remember that a car’s headlights, brake lights, interior lighting, engine control unit (ECU), and other vital components all require power.

Even if you are fortunate enough to avoid accidents, you will almost certainly find yourself stuck in the middle of the road due to a failing alternator. Your safety is jeopardized if alternator difficulties occur on the road, especially during a lengthy journey. You should test the alternator and battery regularly every 4-6 months.

If you see one or more of the warning signals listed below, you should try to go to an auto repair shop as soon as possible.

Is it possible for my alternator to fail while I’m driving?

Yes, alternator failure can occur at any moment, even while driving.

Fortunately, if your automobile alternator fails while driving, the consequences aren’t as severe as losing your brakes.

If your car’s alternator fails while driving, your battery will provide all of the electrical power the vehicle requires. The battery can provide the necessary power, but only for a limited duration.

The size and health of the battery and the number of electrical devices you use to determine how long it will survive.

What should you do in this situation?

If you’re driving and fear your alternator has stopped working, switch off all electrical accessories and locate a safe parking location.

If you have a recent automobile with electrical power steering, a failing alternator while driving might cause problems since you will lose all power steering.

In such instances, avoid driving the automobile at all costs.

This might cause the engine to overheat, resulting in catastrophic damage. Because the typical cost of rebuilding an engine is between $2,500 and $4,500, it’s preferable to avoid taking such a risk.

Please remember that if your alternator fails due to a snapped serpentine belt, it may create problems with other components, such as the water pump.

How to Care for Your Alternator

Along with keeping an eye out for any red signs, there are several things you can do to help protect the integrity of your alternator and keep it fully working for as long as possible.

Some general alternator maintenance suggestions are as follows:

By following these guidelines, you can maintain your alternator running for as long as possible, but remember that even a good, well-cared-for alternator might have problems. It’s critical to make frequent car maintenance a habit and to get your vehicle inspected by a reputable local mechanic.

How to replace an Alternators

Alternators can be costly to replace at local stores. So, with a rudimentary understanding of its maintenance and the appropriate instrument, you can save the day.

The first step is to unplug the wires from the battery terminals and the alternator. Then, as you relieve the tension, remove the belt from the pulley.

Unscrew the alternator nuts, remove the old alternator, and install the new one. Following that, you must reverse the removal procedure and reconnect the battery.

When finished, start the engine and look for the dashboard warning light. Keep an eye out for any additional indications of a faulty alternator.

What is the average time it takes to replace an alternator?

In most current vehicles, alternators are quite simple to repair. However, before replacing the alternator, it should be bench checked to ensure it is malfunctioning. Examine the serpentine belt for signs of wear and tear as well.

Have you had your battery tested to make sure it isn’t dead? In most cars, diagnosis and replacement may be completed in about an hour unless your mechanic requires the alternator to be checked at a different facility.

How much does it cost to replace a faulty alternator?

The cost of replacing an alternator is determined by the brand and model of the vehicle, as well as whether a new alternator or a remanufactured alternator is fitted.

For most domestic automobiles, labor and parts for a remanufactured alternator should cost between $300 and $500. Prices for imported models may be higher. A new alternator can cost between $500 and $1000, not counting labor to diagnose and install it.

Refurbished alternators have been thoroughly repaired, with new diodes and other parts that may be required to be fitted and bench tested. Reconditioned alternators are also warranted for one to three years.

You should know how many miles your car has driven and when your batteries were last changed. Knowing this information lets you deduce if the batteries or the alternator are faulty.

You must also include the component number of your broken alternator to guarantee that you get the identical type. Purchase a high-quality alternator with a guarantee, such as a Volvo or a Toyota alternator.