How Long Do Camels Live?

Camels belong to the dromedary animal family. Two humps distinguish them on their backs, lengthy necks, and a preference for desert or dry environments. 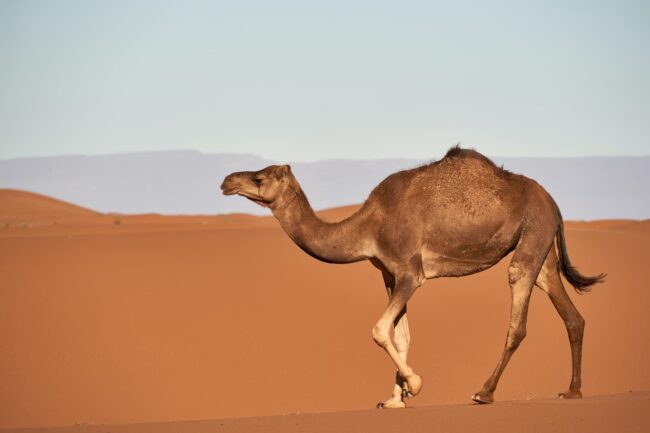 Camel domestication dates back 3,000 years. Humans utilized them for various purposes, the most common of which was to move through dry areas. Camels can go for extended periods without food or water.

They can easily carry an additional 200 pounds and trek roughly 20 kilometers daily in tough desert conditions. Domestic camels are frequently the primary source of meat, milk, and even leather and wool.

How long do wild camels live?

As previously stated, camels have an extremely high life expectancy, living anywhere from 40 to 50 years in the wild due to no known natural predators and their capacity to store water and food for several days, reducing the need to consume.

How long do captive camels live?

Camels, like other animals, live longer in captivity than in the natural, having the ability to live up to 50 years in captivity while dying at roughly 40 years old in the wild.

Camels and other dromedaries are killed by people more often than by their natural predators.

However, most of them have been tamed by humans, considerably expanding the world’s camel population.

Camel life expectancy varies by species, although the Arabian camel (Camelus dromedarius) can live for 40 to 50 years.

Bactrian camels have a lifespan of up to 40 years.

To help it live in the desert, the Dromedary Camel has developed a versatile eating technique. These species choose only a few leaves from each plant. These camels may also consume plant portions that other animals avoid, such as the thorns of the acacia tree.

Camel foraging herds will disperse widely, so they do not overgraze the plants in one region.

This selective grazing technique decreases vegetation stress and competition between camels and other herbivores.

The Dromedary Camel is no longer classified as wild. It is a semi-domesticated animal that roams freely but is controlled by herders in Africa and Arabia.

Camels are herbivores, meaning they largely consume grass, cereals, wheat, and oats. They spend their days grazing and seeking food. Food, on the other hand, might be difficult to come by given their harsh desert habitat.

They have strong yet flexible lips that allow them to tear off and eat vegetation that other animals may avoid, such as thorns or salty plants. Camel ruminants, like cows, regurgitate food back up from their stomach to chew it again.

A camel can go for more than a week without water and several months without nourishment. Camels store fat in their humps as energy when food and water are limited. The amount of time a camel can survive on stored fat is determined by the climate and the animal’s activity level. The size of the hump fluctuates depending on how much food the animal consumes.

The female camel gives birth to one or, in rare cases, two offspring after a gestation period of 12 to 14 months. An expecting mother locates a private, vegetation-covered place for her calving site. A baby camel is born without humps, but little peaks conceal themselves with a curled hair tassel, signaling where the humps will grow. Within half an hour after birth, the infant can walk.

The mother and her young will rejoin the herd in two weeks. Depending on the species and food availability, the mother will continue to nurse her young for 10 to 18 months. Camels achieve full adult size around the age of seven.

Camels are most commonly found in deserts, where the temperature is hot and dry.

What is the purpose of camel humps?

Camels’ humps are generally connected with their capacity to go extended periods without drinking. They do not, however, store water. Their humps, on the other hand, are formed of fat. Camels are most commonly seen in locations with little water and vegetation. When they don’t have access to the resources they need to survive, their fat stores can be turned into energy.

Camel survival in the desert

Camels are highly adapted to their desert settings, with various smart modifications that allow them to survive extreme hot and cold temperatures.

Camels are members of the camelid family. They are related to llamas, alpacas, guanacos, and vicunas, all of which are endemic to South America.

To keep sand out of their eyes, camels have three sets of eyelids and two rows of eyelashes.

Camels have large lips that allow them to hunt on prickly plants that other animals cannot consume.

During sandstorms, camels may close their noses.

Camel skin patches on their chest and knees allow them to sit comfortably in very hot sand.

Their humps allow them to store up to 80 pounds of fat, which may exist for weeks, if not months.

A camel may consume up to 40 gallons of water in one sitting.

Camels are extremely robust and can travel up to 25 kilometers per day while carrying up to 900 pounds.

Camels can reach speeds of up to 40 miles per hour.

In Arabic alone, there are approximately 160 terms for a camel.

Camels are distinguished from other Camelidae species by their capacity to produce milk. Camel milk production is mostly done in pastoral migratory systems; however, semi-intensive and intense camel dairy farming is becoming more popular in many nations.