How Long Do Crickets Live? (And Why)


Crickets are related to grasshoppers. Crickets and grasshoppers both have big hind legs for jumping. Crickets can be found in various habitats, including meadows, bushes, forests, beaches, caves, and even our homes. 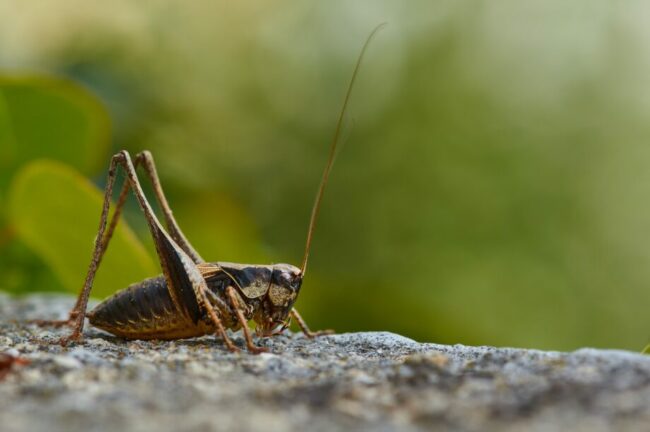 They are well-known for their obnoxious chirping at night. The chirping is a song performed by male crickets to attract ladies. The male cricket wings produce this chirping sound.

Despite their roach-like look, some Chinese and Europeans keep them as pets. Do you think this is absurd? In South-East Asia, they are deep-fried and sold as snacks in local markets. The major question is, how long do crickets live, and why do they live so long?

Crickets live for how long?

The lifespan of a cricket varies depending on the species. There are about 900 species of crickets around the globe. Field crickets, camel crickets, and house crickets are some of the most prevalent.

Typically, a female cricket lays hundreds to thousands of eggs. These eggs hatch into tiny nymphs after 14 days of incubation. The nymphs mature gradually into adults, taking an average of 90 days.

Mole crickets can survive for up to two years from egg to adult. After that, they spend the whole winter underground.

Males in other cricket species die as soon as the mating season passes. Females, on the other hand, live until the nymphs hatch before dying. Adult crickets that did not reproduce in the spring hibernate during the winter.

The ability of females to conceal their eggs from males determines survival from generation to generation. Males eat on the eggs deposited by females. The eggs must be stored at a temperature range of 27 to 32 degrees Celsius.

How long can a cricket survive in my home?

Crickets live around 8-10 weeks as adults before dying of old age. Adult crickets are frequently killed by cooling temperatures later in the year. Adult crickets can survive for up to two weeks without food or water. It is feasible to starve out crickets, but they may cause significant damage while you wait.

How Long Can Crickets Go Without Eating?

Adult crickets may survive for up to two weeks without sustenance. Without food or water, juveniles can survive for 5-7 days. Larval crickets are the most vulnerable to famine, and if deprived of necessary nutrients, they will die within three days.

Instead of using pesticides, some homeowners chose to starve the crickets in their homes. This is accomplished by removing food and water from areas where crickets are known to congregate. Unfortunately, crickets will nibble on vulnerable plant leaves, so keep your property mowed, manicured, and clean. This works most of the time, but two weeks is a long time to wait, and these critters will have done a lot of harm in the meantime.

Crickets are jumping insects with large rear legs that resemble grasshoppers and are related to Katydids. Crickets have long antennae that might be as long as their body. Most people associate crickets with black, although diverse species come in various colors.

The lifespans of field, camel and house crickets are shown in the table below:

Why do crickets have a life expectancy of 2-3 months?

A cricket can live for a month after adulthood if conditions are appropriate. The majority of crickets do not survive to their full life expectancy. A variety of factors can influence how long crickets survive. These are some examples:

Factors that determine their life cycle

There are about 900 different species of crickets around the globe. Field cricket, camel cricket, and house cricket are some of the most prevalent. None of these crickets survive for more than a year, and some live for much less time. The field cricket dies each winter. However, the house cricket can live for up to a year in a warm environment before succumbing to old age.

How can crickets be passed on from generation to generation if the adults die in cold weather? The solution is that they lay their eggs in locations where they will be able to survive the winter.

Field crickets, for example, deposit their eggs in the dirt. The eggs hatch the next year, only in late spring or early summer. After that, the nymphs will progressively mature into adults, which might take up to 90 days. Finally, adult crickets mate and lay their eggs in the ground before succumbing to the cold.

The mole cricket is one kind of cricket that is not killed by cold or rapid aging. Instead, these insects spend the winter down underground. However, they do spend most of their lives underground.

As mating season approaches, the immature nymphs mature into adults. However, the adults die shortly after mating after the females have laid their eggs. In the end, a mole cricket can survive up to two years from egg to adult.

Crickets that reside indoors can live for a long period. It has been reported that captive crickets in a controlled setting can live for up to two years under ideal conditions. Natural predators and adverse weather are eliminated in such ecosystems.

Crickets only enter people’s homes to avoid the cold weather or to hide from predators. This is usually observed in field crickets. House crickets, ironically, are rarely found indoors.

Crickets are preyed upon by a variety of predators, including humans. The number of predators that feed on crickets in a certain location impacts the crickets’ life expectancy. Nevertheless, most of these crickets do not perish from old age.

Predators consume them before they reach the end of their lives. Then, however, a natural equilibrium occurs, with female crickets depositing many eggs.

Climate is a major factor in cricket’s short lifespan. Crickets live from spring to the beginning of winter in locations with distinct seasonal changes.

They are born in the spring, lay eggs in the fall, and perish when temperatures drop below freezing. It indicates that most crickets have a life span of up to six months.

Crickets may live for more than a year in a warm climate. However, high temperatures, like cold conditions, decrease their life span.

How Quickly Do Crickets Grow?

After two weeks, the first nymphs emerge. A typical nymph is barely about an eighth of an inch long and lacks wings. In addition, female nymphs have not yet grown an ovipositor.

Each nymph must lose its exoskeleton about eight to ten times before becoming a fully-grown organism. This process takes around three months to complete, plus another month for the wings to mature.

Crickets live for an average of 90 days. This life period is more applicable to field crickets. Crickets can survive for up to a year if maintained as pets.

As previously noted, various variables influence cricket life expectancy. More than one of these elements can influence the population of crickets in a given area.

Indoors, crickets may cause havoc. They eat textiles, human food, and paper. In addition, the males’ harsh chirping sound can be bothersome if they congregate inside in large numbers. As a result, learning more about these insects is beneficial.