How Long Do Crocodiles Live?

The most well-known members of the crocodilian family are crocodiles. This suggests that caimans, alligators, and the Indian Gharial are closely related to crocodiles. Crocodiles are one of those natural predators that were once at the top of the food chain about 100 million years ago.


The design of a crocodile’s body makes them so frightening—having such solidly formed bodies, robust jaws, and teeth that are both sharp and strong. In addition, crocs are a type of semi-aquatic animal, which means they spend most of their time in the water but occasionally must leave it. 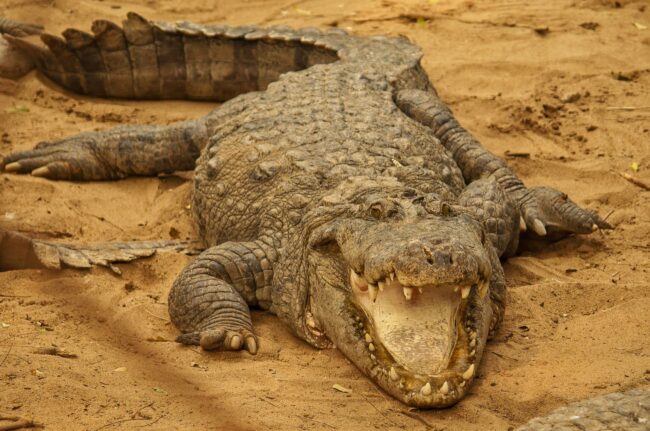 In Central and South America, Africa, Asia, and Australia, there are 14 different species of crocodiles. They are common in estuaries, rivers, the open sea, and areas close to the coast. Because they use it for swimming and getting a “boost” while attacking other creatures, their tail is one of the most crucial parts of their body.

Crocodiles often retain their physical characteristics until the time of their demise after reaching a specific age. This is one of the factors contributing to the difficulty in determining this reptile’s age.

The Saltwater crocodile is the longest-living crocodile species and may live up to 70 years in the wild. But crocodile life spans vary considerably among species, from 25 to 70 years. In captivity, crocodiles have been known to live for over 100 years.

Crocodiles are unique in that they don’t pass away from old age. They do not know their age biologically and pass away. Instead, they keep expanding until an outside force kills them. It is understandable why they have persisted for so long, given their effective hunting strategies, enormous size and muscle, and gregarious behaviors.

Which creatures feed on crocodiles?

Herbivores and tiny animals are terrified of vicious predators. So on their own, they have developed a natural rivalry. Even wildebeest-sized animals can be attacked and eaten by the biggest crocodiles.

But occasionally, desperate large cats like jaguars and leopards would try to attack a helpless crocodile. When circumstances are tough, giant serpents like pythons and anacondas would also gamble against a croc.

These incidents are uncommon because crocodiles don’t often have predators. This improves the chances of the crocs living long lives. They stand a better chance of surviving longer if they avoid becoming prey.

What do crocodiles feed on?

It’s unfathomable what crocodiles devour in the wild just by looking at their enormous size. Large ungulates, medium-sized birds, tiny reptiles, and various other species are consumed by crocodiles. Although they spend most of their time in the water, crocodiles may also hunt on land.

More precisely, they eat anything that swims, flies, or moves. Snakes, deer, fish, tiny elephants, cows, carrion, gazelles, wild boars, dogs, buffalo, wildebeests, and kangaroos are among the specific favorites of crocodiles. Sharks are also eaten and attacked by crocodiles. Hippopotamuses and rhinoceroses are likewise not safe from crocodiles.

Crocodiles are sometimes called “sit-and-wait predators” because they wait for the ideal opportunity to attack a victim. They always keep their eyes on the prey while remaining stationary in the water.

These animals smash their food with their powerful jaws before swallowing it whole. Like several other animals, they cannot chew or break off little bits of food. Instead, crocodiles ingest tiny stones that break up the food in their stomachs to aid digestion. They may go months without eating because of their sluggish metabolism.

What distinguishes crocodiles from alligators?

A crocodile’s jaw is V-shaped, whereas an alligator’s is U-shaped. In addition, the gator’s teeth do not protrude beyond their top lip when their jaws are closed, unlike those of crocodiles. Finally, crocodiles have salt glands on their tongues, another distinction between them and alligators.

Crocs can survive in saline water thanks to their modified salivary glands. However, caimans and alligators prefer to dwell in freshwater environments since they can no longer release too much salt through their tongue glands.

The biggest and heaviest living reptiles are crocodiles. There are 14 distinct crocodile species in the world. The dwarf crocodile, which may reach a height of 4.9 feet and weigh between 40 and 71 pounds, is the smallest species. On the other hand, the saltwater crocodile’s biggest species may reach a length of 23 feet and a weight range of 2,200–2,600 pounds.

Additionally, crocodiles have the world’s most powerful bite! Greater crocodiles are capable of biting with more than 5,000 pounds of power. They can capture a variety of animals because of their strong bite. As carnivores, meat makes up the majority of their diet.

Are crocodiles considered an endangered species?

One of the crocodile species most at risk of extinction is the Cuban crocodile. According to the International Union for Conservation of Nature (IUCN), it is classified as severely endangered and has a population of just 4,000.

The species is always in danger from poaching. The IUCN rates the American crocodile as vulnerable, but numbers are growing.

What crocodile weighs the most?

Lolong, a saltwater crocodile 20 feet 3 inches long and 2,370 pounds in weight, was the biggest one that had ever been officially measured. Sadly, he passed away in February 2013 from congestive heart failure.

The great majority of crocodile assaults, both fatal and non-fatal, are carried out by the saltwater and Nile crocodiles, who have the most established and well-documented reputations for preying on humans.

Which nation has the greatest crocodile population?

To conclude, crocodiles have varying life spans, and it’s highly dependent on the species. Life spans range from 25 to 70 years, with those in captivity even living up to 100 years old.