How Long Do Dragonflies Live And Why?


Dragonflies are little insects that are frequently observed flying around houses in neighborhoods. These flying insects are predators born near bodies of water and then move across seas to locate a suitable home. 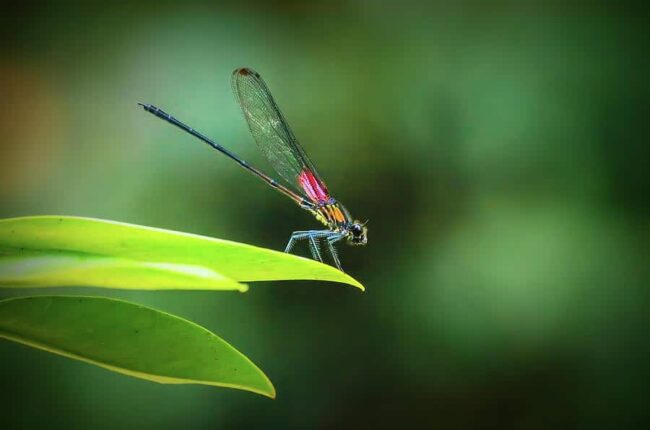 Female dragonflies deposit their eggs in or near bodies of water. This is because water is the only habitat in which dragonflies can thrive during their larval stage.

Dragonflies, on the other hand, frequently mistake glossy surfaces for sources of water and deposit their eggs there. After depositing their eggs in such locations, the dragonfly larvae cannot survive due to a water shortage, resulting in a decline in the dragonfly population.

Dragonflies are drawn to bright surfaces such as polished gravestones, solar panels, vehicles, and other similar locations.

What Exactly Is a Dragonfly?

A dragonfly is a big, flying insect found on all continents except Antarctica.

Dragonflies are known for their big, flat wings and bright colors, which vary according to the individual and the location in which they inhabit.

Dragonflies have enormous, complex eyes, commonly known as “bug eyes,” visible from a distance. Dragonflies are found in approximately 5,000 different species across the world.

Where Can You Find Dragonflies?

Dragonflies may be found on every continent. They often dwell near water; most dragonfly species spend most of their lives beneath or around the water’s surface.

Dragonflies love ponds, marshes, or streams, depending on the species. Dragonflies are notorious for being fussy about where they live. If you observe a dragonfly near a body of water, that means the water is usually clean.

The dragonfly’s body, like other insects, is divided into three different sections: the head, abdomen, and thorax, and it has an exoskeleton. A dragonfly’s head is the smallest section of its body and features two short antennae. A dragonfly’s body length ranges from 1-4 inches.

Eyes of a Dragonfly

Dragonflies are also well-known for their eyes. A dragonfly’s eyes encompass most of its head, allowing it to view almost 360 degrees around it. The eyes of a dragonfly are separated on the sides of the head and joined at the top.

Dragonflies have complex eyes and a higher concentration of color proteins than humans. This implies they experience the world as a mosaic of a million little pictures.

The dragonfly’s vision of the environment is still being studied. Still, studies reveal that dragonflies have a remarkable capacity to perceive colors that people cannot see and in various tints and intensities, including ultraviolet light.

wings of a dragonfly

Dragonflies have two pairs of wings and three pairs of legs on their thorax. Long, translucent, and “patterned” wings The wings of a dragonfly are as distinct as its colors.

Consider a dragonfly’s wings akin to leopard spots or zebra stripes. They’re a strange, existent pattern in nature, and scientists aren’t sure how or why they arise.

Dragonflies, like their wings, are tough insects. The dragonfly’s wings are joined to the body by a powerful muscle, allowing it to fly vast distances at fast speeds.

Female wings are somewhat shorter than male wings in most species. Like many other flying insects, dragonfly wings do not fold. As a result, when a dragonfly lands, its wings remain horizontal to its body.

What exactly is the distinction between dragonflies and damselflies?

The appearance of dragonflies and damselflies is similar, yet several major distinctions exist. Dragonflies have thicker, heavier bodies, whereas damselflies are more slender. When resting, dragonflies leave their wings open, but damselflies fold them on top of their body.

What Is the Life Expectancy of a Dragonfly?

The Stage of Larvae

The first stage of the dragonfly’s lifecycle begins when the eggs hatch. At this stage, the dragonfly will be a larval known as a ‘nymph.’

The nymph will spend one to four years in the water, depending on the species. During this period, it will consume the larvae of other insects and tiny tadpoles, and, on occasion, fish.

Unlike butterflies and moths, dragonflies do not develop into chrysalises and emerge as adults.

Instead of pupating, the immature nymph will go from its watery habitat to the riverside, where it will hang on a branch or steam and dry out in the sun. The nymph will metamorphose and become a dragonfly.

The Stage of Adulthood

After converting into a dragonfly, the freshly emerging adult waits in the sun for a few hours to strengthen and dry its wings. The dragonfly is a general at this stage, a Latin term that means fragile and gentle.

The dragonfly is susceptible to predators at this stage and can even be eaten by other dragonfly nymphs. Many dragonflies perish at this stage because they can be hit by a boat or blown around by the wind.

Once the dragonfly gets strong enough to fly, it will be safer and more dangerous. Birds, lizards, frogs, and even fish may devour the baby dragonflies at this time.

They are often competent at self-defense, have exceptional vision, and can fly swiftly, allowing many to adapt and avoid predators.

Dragonflies are fast and reside near water, eating other flying insects like mosquitos. Some bigger dragonflies will even pray on damselflies. Adult dragonflies live for three to six months, long enough to mate and deposit eggs.

Many factors influence the lifespan of a dragonfly; if the weather is favorable, they are more likely to survive until adulthood.

Dragonflies love warm, dry conditions and are vulnerable to rain and high winds. They may live for up to six months if the weather cooperates.

However, if the weather is cold, damp, and windy, dragonflies will perish and reproduce within a few weeks. A dragonfly dying in old age is remarkable. Most will be eaten by a predator or perish due to adverse weather conditions.

Here’s a fast rundown of the phases of a dragonfly’s life cycle, from egg to death, and the length of time the dragonflies spend in each phase:

Why do dragonflies live for such a long time?

Dragonflies live for such a long time because their life cycle is designed in such a way.

However, most experts today think that the dragonfly’s life cycle consists of only two phases: the nymph and adult phases. The nymph period is the longest, lasting 2 to 3 years.

This is because the dragonfly’s body develops at this stage. During this period, the body is shaped for the adult stage and shredded 17 to 20 times.

One thing to remember is that water is the most critical requirement for dragonflies throughout their nymph stage. This is due to the larvae’s only home being water.

Furthermore, their food supply is only available near bodies of water. However, if the dragonflies do not have access to a water body as their home, or if the larvae relocate out of the water body for whatever reason, it becomes difficult for them to live.

As a result, they cannot grow their bodies further for the adult stage and perish. In this instance, the dragonflies’ lifetime is decreased to somewhere between 6 months and a year.

What do dragonflies consume?

Dragonflies are virtually entirely carnivorous, which means they devour other animals. These flying predators track and consume their prey with ravenous appetites, and many are adept hunters.

Because of their predatory tendencies and high success rate, they are one of nature’s most efficient and brutal predators.

Their food consists of a broad range of insects, most of which are smaller and less powerful. Dragonflies must consume a large amount of food to maintain their energy levels. Hence they frequently prioritize quantity above quality in their diet.

They eat different things based on where they are in their lifecycle. Adult dragonflies consume other flying insects, but nymphal dragonflies devour ground insects and mammals. We’ve discovered 15 frequent meals in a dragonfly’s diet to answer the question, “what do dragonflies eat?”

Among these foods are:

Dragonflies will devour almost anything smaller than themselves. They are not discriminating feeders and may even prey on smaller dragonflies if they are around.

The average dragonfly may consume up to one-fifth of its body weight daily, and some can consume even more. As a result, they will devour almost everything they can get their hands on.

Their preferred meals, though, are mosquitoes and midges. Because of their capacity to control mosquito populations, they are particularly beneficial in preventing the spread of mosquito-borne diseases.

Is it possible to keep a dragonfly as a pet?

Dragonflies are entertaining to raise but difficult to manage as pets. They are large-winged insects that may reach a length of 4 inches. Collect some water and pick out the nymphs with an aquatic insect net. It is preferable not to introduce a new species that may become invasive.

Dragonflies are not very bothersome, but they can play an important role in the transfer of illness, germs, and bacteria from one location to another.

As a result, avoiding the growth of dragonfly colonies near your home is critical. To do this, avoiding water accumulation in your surroundings is critical.