How Long Do Elephants Live And Why?

70 years is the exact answer.


Elephants are the world’s biggest terrestrial animals, mostly found in Africa and Asia. 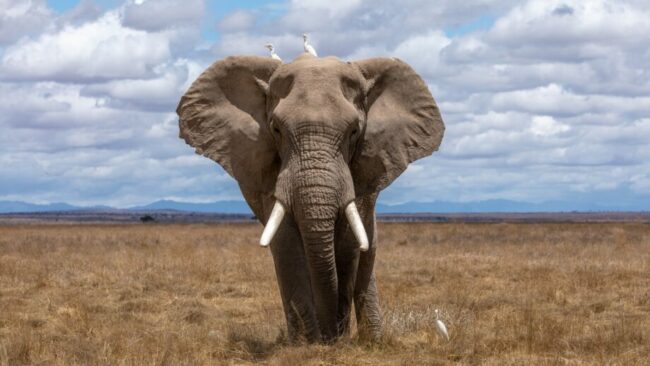 Elephants are proboscideans, belonging to the Elephantidae family and the Proboscidea order. They are one of the largest living mammals, and the most well-known are the African bush elephant, African forest elephant, and Asian elephant.

Elephantidae is the sole surviving family of the order Proboscidea. Several other groups exist, such as straight-tusked elephants and mammoths. In several ways, each elephant species is distinct from the others.

The gentle-but-colossal herbivores require a lot of fuel, and the average adult elephant consumes 330 pounds of plants daily. When elephants weigh between 5,000 and 14,000 pounds, 330 pounds of food makes sense!

Males are typically 9 feet tall, while females are somewhat shorter at 8 feet. They utilize their trunks to carry or eat anything they want. It has around 60,000 muscles with radial and longitudinal groups.

Their tusks are used for various reasons, but the tusks are collected for their ivory. Even though they have two tusks, they can be either right or left tusks.

They may also consume 45 liters of water every day.

Every day, they trek roughly 20 kilometers to obtain food. And they sleep about 2 hours a day.

The elephants are not in good health, despite their massive size. All three extant species are on the International Union for the Conservation of Nature’s Red List due to poaching, climate change, and habitat degradation. Endangered African bush elephants and Asian elephants, as well as Critically Endangered African forest elephants

Elephants live for how long?

Elephants, as previously indicated, are in danger of extinction. An elephant in the wild can currently live to reach 70 years old. Elephants are one of the longest-living terrestrial animals, second only to humans. The longest-living animal is found in the water, not on land. Bowhead whales can live for 200 years.

How Long Can Asian Elephants Survive in the Wild?

They live for an average of 48 years but can live for much longer.

Many reasons, including poachers and hunters, contribute to the wide age range.

Asian elephants that do not work as timber elephants can live for up to 60 years.

Because of their ears and head structure, Asian elephants vary from African elephants.

How long do Asian elephants live in the zoo?

Asian elephants only survive in captivity for 19 years, especially if kept in a zoo.

Unfortunately, the majority of Asian elephants that are still living today are in captivity or semi-captivity.

Asian elephants are listed as endangered, and only around 30,000–50,000 Asian elephants remain in the world, with many residing in zoos or environments.

In captivity, they are secure from poachers but have lower average lifespans.

How Long Can African Elephants Survive in the Wild?

In the wild, African elephants can live for 56-70 years.

African savanna elephants are bigger than African forest elephants. They are what people envision when they consider what an elephant looks like.

How long do African elephants live in zoos?

African elephants in zoos live for an average of 17 years, one-third of their projected lifetime of 56 years. Even if an African elephant is born in captivity and knows nothing else, it will only survive for roughly 17 years.

They may survive for extended periods and have been known to live for up to 48 years in captivity. However, such examples are uncommon.

African bush elephants are among the species that may be seen in Uganda.

Now that you know how long African and Asian elephants live, you might wonder why they appear to die so fast in captivity.

It’s a complex issue worth investigating, especially if you like elephants.

Why are wild elephant lifespans decreasing?

Although wild elephants live longer than captive elephants on average, their lives are generally cut short due to poaching or illegal hunting. Profiteering has brought these species to the verge of extinction. The lives of elephants are also made more difficult by habitat degradation and drought (an effect of climate change).

The illicit ivory trade has been extremely harmful to elephant populations, and their numbers have decreased substantially throughout the twentieth century. Elephant numbers are more stable than in previous decades, although poaching remains an issue.

Human encroachment on elephant habitat is a lesser-known but important element to consider while studying an elephant’s life and behaviors. According to National Geographic, the African elephant habitat has shrunk by more than half since 1979, while Asian elephants now have access to only 15% of their original area.

Other elephants are victims of ritual spearings, gunshot wounds, and other misfortunes that would not have occurred if humans had not been in their region.

Why do elephants live longer in the wild than in captivity?

Elephants live longer in the wild than in captivity because they are exposed to illnesses against which they have no defenses, and they are subjected to stress, which can lead to depression.

Although some elephants can survive in captivity for a long time, these are exceptional examples. Many confined elephants have limited lives, according to the African Wildlife Foundation.

Elephants in captivity frequently experience high-stress levels, which can limit their longevity over time.

Elephants do not survive long in captivity because it is difficult for most zoos to replicate their natural environment. They frequently feel melancholy if there isn’t enough area to wander in their cages.

Elephants are accustomed to living in large open expanses, but many zoos cannot provide that enclosure. Thus the elephant is forced to live in a limited area and is unhappy.

Elephants can also grow fat since they don’t receive as much exercise and have a consistent source of food that they don’t have to hunt for.

Elephants can also suffer arthritis, which is caused in part by obesity.

Elephants are not intended to stand in one spot for lengthy periods; instead, they are built to roam and travel almost continuously. However, in a zoo, they frequently end up standing in one spot for an extended period due to boredom or a lack of stimulation.

Elephants are sociable animals that commonly live in herds of 20-70 other elephants; however, Asian elephants and ants normally live in groups of 5-7 elephants, and male elephants live alone.

Many elephants are lonely since zoos can only house one or two elephants simultaneously. This can result in depression, which can shorten their life.

Many elephants get infections in captivity, such as herpes and TB, which harm their health and significantly reduce their life expectancy.

Elephants are complicated creatures to care for, and zoos and conservation organizations are doing everything possible to give them a long and happy existence.

Although this is a method of population preservation, it is not perfect.

Humans destroy elephant habitats to build more towns and cities. Infections and illnesses can contribute to elephants’ and their offspring’s short lifespans. Elephants reproduce well and have no problems reproducing. They are on the verge of extinction for various causes other than killing.

Their fecundity also determines elephants’ longevity. The elephants’ health and bodily conditions are also affected by their parent’s health. The elephants’ lifespans have been meticulously measured based on surveys, and the life span is an average of 70 to 80 years.