How Long Do Fireflies Live And Why?


These flies are members of the Phylum Arthropoda and the class Insecta. These fireflies live in various climates, and the placement of the organs that generate light differs across sexes and species. Furthermore, these insects come in various forms, sizes, and colors, making them one-of-a-kind. 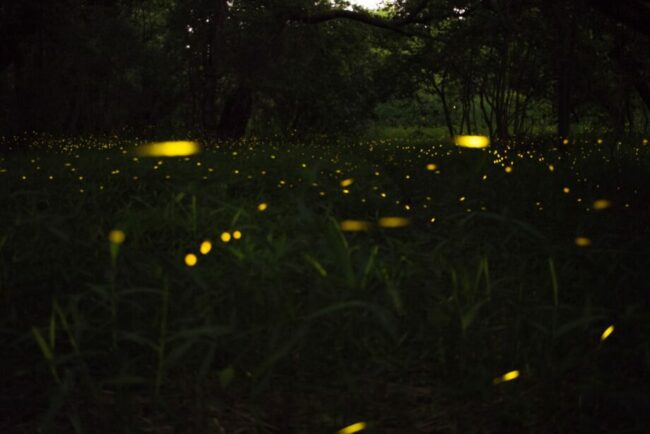 What Is the Life Expectancy of Fireflies?

Fireflies have a limited life expectancy. They are microscopic miniature insects that come in a variety of types. However, not all fireflies emit light; in fact, many firefly species do not emit light. The process continues from the mating stage to the adult stage and gives birth to the following generation, although the lifetime remains limited.

Fireflies, like other beetles, go through a complete metamorphosis with four phases in their life cycle: egg, larva, pupa, and adult.

Mated females will lay around 100 spherical eggs, either individually or in groups, in midsummer. Fireflies love damp soils and will deposit their eggs under mulch or leaf litter where the soil is likely to remain moist.

However, it differs depending on the species. These eggs hatch in three to four weeks on average.

Larvae hatch from their eggs in late summer and spend the winter under the soil before pupating in the spring. This is only one of the numerous benefits of leaving leaf litter in our garden beds.

The larvae search and devour slugs, snails, and worms at night. To ingest food, the larvae will catch its prey and inject it with digestive enzymes, immobilizing and liquefying its remnants.

The pupation of firefly larvae differs depending on the species. When the larva is mature, which is normally in late spring, some species build a mud chamber in the earth and settle within. In some species, the larva hooks itself to the bark of a tree and hangs upside down by its rear end.

During the pupal stage of development, a spectacular metamorphosis occurs. The larva’s body is broken down in a process known as histolysis, and unique groupings of transformational cells are triggered, starting biochemical processes that change the insect from a larva to an adult.

When the metamorphosis is complete, the adult firefly is ready to emerge, which can take anywhere from 10 days to several weeks.

When an adult firefly emerges, it only has one goal in mind: to reproduce. Fireflies employ a species-specific pattern to seek suitable individuals of the opposite sex while looking for a mate.

The male often flies low to the ground, flashing a signal with the light organ on his abdomen, and a female resting on plants repeats his message. By repeating this dialogue, the guy narrows his focus on her, and the rest of the narrative is happily ever after.

All phases of fireflies illuminate, regardless of their life cycle. Bioluminescence may be found in firefly eggs, larvae, pupae, adults, and certain larvae that live underground or underwater. When disturbed, some firefly eggs generate a faint glow.

Experts believe that the ability to emit light aids larvae in signaling to predators that they are unappealing, as part of the firefly’s defensive strategy is to create foul-tasting steroids.

Why do fireflies live for such a long time?

The frigid temperatures are too much for the firefly. As a result, fireflies hide inside the bark of trees during the harsh winters. The average life expectancy is roughly two months.

The lifetime of fireflies varies depending on their stage. Furthermore, the tiny size is critical to the survival of the life cycle. Fireflies are omnivores since they eat both plants and tiny insects like worms.

Few of them may live for more than a year, although the maximum life span is most likely one year. The lowest life span is two months. However, most of the time, it is the average. The adult firefly lives for a fairly short period, but the larva lives much longer.

Many fireflies do not glow or produce light. Thus they are referred to as day-flyers. The American and Eurasian firefly populations are among the greatest on the planet. Most tiny insects have shorter life spans because they are readily preyed upon by large predators. Fireflies may have a chemical edge over other insects, but their life is still short.

Predators devour the majority of fireflies because they contain harmful substances that can be fatal to the predators. And the firefly body includes a variety of substances that aid in bioluminescence.

Chemical processes occur within the body, resulting in the emission of a bright light, which we commonly see at the start of spring and throughout the summer season.

Where Can You Find Fireflies?

Fireflies may be found on every continent. However, these lightning bugs flourish in warm, humid environments. Fireflies are frequently seen in woodlands and open areas near bodies of water, such as a marsh, pond, or river.

It’s a lovely, captivating sight to see fireflies take flight at twilight or dawn. There are over 2,000 varieties of fireflies, and knowing where to search for them and when to seek them will assist you in spotting these bioluminescent insects.

Fireflies may be found all over the world in a variety of temperatures, from North and South America to Europe and Asia. Fireflies may also be found in desert areas. However, they like to gather around standing water sources during the rainy season.

The most diversified firefly populations may be found in tropical Asia, Central and South America, and other humid climates.

What causes fireflies to glow?

This flashing habit does not happen randomly, and each species’ flashing patterns are distinct.

Etymologists believe that fireflies can control the quantity of oxygen delivered to their light organs, which is how they turn their glow on and off, but we’re not sure.

However, flashing is believed to serve numerous functions, including attracting a mate and warding off predators.

While some day-flying fireflies do not generate light, many species employ bioluminescence to notify possible mates.

While female fireflies wait from the ground, the male firefly will take off and begin its light display. If a female firefly notices a signal unique to her species that she like, she will reply by flashing the same light pattern.

This generally marks the beginning of their mating ritual, and the fireflies will continue to communicate with one another as the male approaches the female. Consider it the mating version of Marco Polo. Pheromones replace flashing to attract a mate in firefly species that do not light up.

Fireflies also light to warn predators that they should not consume them. The enzymes they create not only glow but also have a terrible taste, making them less appealing to other predators.

And it’s not only the adults that emit a foul-tasting glow; larvae do as well, lending credence to the theory that bioluminescence functions as a defensive mechanism. Some fireflies are toxic to lizards, birds, and frogs and should not be eaten.

Fireflies are among the most beautiful and eye-catching insects on the planet. The bioluminescence phenomena distinguish it from other insects of its kind.

Firefly numbers are dwindling, which is a cause for concern because these delicate animals require a safe home to live in. As a result, it has a special impact on the ecology and food chain.

Nonetheless, these small light animals were emblems of serenity for humanity since they created a tranquil and silent environment. While many of us would have liked following these lights as children, they are now rarely visible under city lights.