How Long Do Pandas Live And Why?


Pandas are, without a doubt, one of the prettiest creatures on the planet. This animal, which is native to Southern Central China, is extremely popular all over the world. It is sometimes known as a giant panda, a panda bear, or a panda. 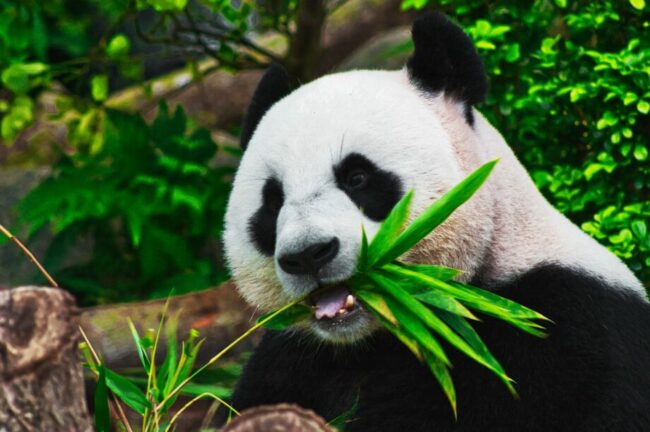 Female giant pandas in the wild have a cub-bearing phase that lasts around ten years. As a result, a mother panda may only have four to six kids in her lifetime.

It’s no surprise that pandas are on the verge of extinction due to poor birth rates and cub susceptibility.

A wild panda produces around five cubs in a lifetime, with approximately half of them dying before reaching maturity, putting the rate of pandas reaching adulthood slightly over the two required to sustain the population.

Pandas are gentle and generally pleasant creatures. They are adorable bears that people like seeing. Pandas are frequently thought to be sluggish since they spend their whole day eating and resting. Pandas are also known to show their affection for their lonely buddies by giving them a loving embrace.

Despite their high status and lack of natural predators, pandas are nonetheless endangered. Human-caused extinction has left just over 1,800 pandas in the wild.

What is the average lifespan of a panda?

What is the average lifespan of a panda in the wild?

The Smithsonian National Zoo, one of the world’s premier zoos for panda conservation, discovered that pandas in the wild might survive for 15 to 20 years.

Scientists find it difficult to determine the actual age of wild pandas. Thus it is assumed to be on average. In addition, it’s difficult for pandas to care for themselves in the wild, especially as loners.

Even though their natural predators are scarce, human activities continue to endanger their life.

The panda eats on bamboo for up to 8 hours a day. Unfortunately, its native habitat, bamboo forests, is being destroyed by humans daily. As a result, the panda’s housing area diminishes, and food becomes more difficult to find.

What is the average lifespan of a panda in captivity?

Pandas may live in captivity for up to 30 years. Furthermore, Chinese experts have reported pandas living up to 35 years.

This disparity between captive and wild pandas explains why wild pandas are more endangered.

Captive pandas do not have to fend for themselves in the wild, where they have little or no human protection.

Food scarcity and adverse environmental circumstances endanger their life in ways that caged pandas do not.

In captivity, everything is provided to ensure their safety and well-being.

It is important to remember that the ultimate purpose of captive breeding operations is to reintroduce captive pandas into their natural environment. As a result, captive pandas are essential to the species’ survival strategy.

In a zoo, how long do pandas live?

Pandas in zoos are also in captivity and can live for up to 30 years. As a result, they are well-cared for and do not suffer any difficulties, unlike those who live in the wild.

What Causes Pandas to Live Longer in Captivity?

The explanation behind captive pandas’ extended longevity is that people greatly protect and care for them.

This is care that people in the wild do not ordinarily receive since they are exposed to specific dangers in their natural habitat.

Conservation facilities worldwide guarantee that captive pandas are secure from all of the dangers they would face if they were released into the wild.

Why do Pandas have such long lives?

Pandas typically live for more than ten years. However, pandas may live for up to three decades if they are well cared for. It is typical for pandas in captivity to live longer than those in the wild since they are safeguarded from the unknown risks of life in the wild.

As a result, pandas in captivity have a life expectancy nearly double that of pandas in the wild.

The longest reported longevity of a panda in captivity is around 38 years. However, it has been noted that most pandas survive between 15 and 20 years.

Pandas are medium-sized mammals. Their height, weight, and stature are comparable to that of a wild bear. Pandas mature and reach full size after around 5 years. Years 1 through 5 in the life of a panda are considered to be the adolescent years.

After this phase, a panda’s prime time lasts roughly 15 years. Because the usual life expectancy is 15 – 20 years, when a panda reaches the age of 20, it is considered elderly.

Of course, several variables can either decrease or prolong a panda’s lifespan. However, the fundamental factor is the environment in which they live. In addition, the human attention and compassion that pandas in captivity receive contribute to their longevity.

As a result, many zoos, conservation centers, sanctuaries, and other organizations are interested in preserving pandas since it aids in their protection and acts as a big tourist attraction.

Pandas in human care live longer lives than those in the wild. For example, the oldest living panda, Xin Xing, lived in captivity for almost 38 years. This demonstrates that a predicted lifespan is only a number. Pandas, too, may live longer than their typical life expectancy of 15 to 20 years if properly cared for.

Pandas are typically considered solitary creatures, which is partially accurate. To help them live longer, lavish them with care, love, and devotion for them to outlive their estimated and likely life expectancy.