How Long Do Rhinos Live And Why?

Rhinos are some of the largest and most recognizable mammals on the planet. Their bulky bodies, sharp horns, and lumbering gait are not precisely inconspicuous animals. But in recent years, rhinos have become much more challenging to spot than before.

The alarming drop in numbers has led many people to wonder just how long do rhinos live? To learn more about these fascinating creatures, we’ve compiled everything you need to know about rhinos. From their habitats to their diet and breeding habits, keep reading for an in-depth look at these amazing animals. 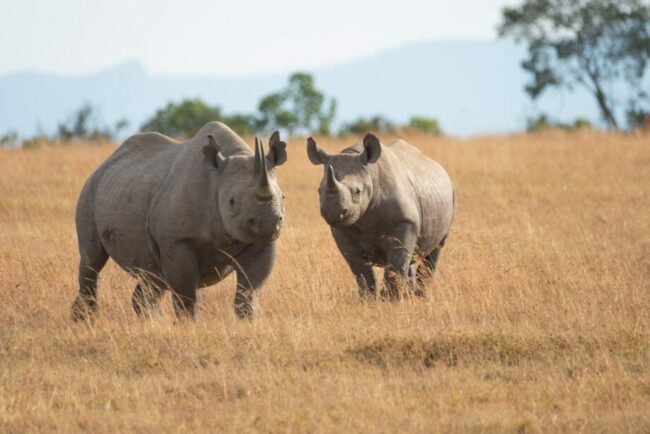 What is the average lifespan of a rhinoceros?

These colossal creatures may live for 35 to 45 years in the wild. In captivity, though, they may live much longer.

Caged rhinoceros typically live between 35 to 55 years because they are personally cared for and protected from poachers in captivity.

The lifespans of various animals vary. However, most of them die between the ages of 35 and 48.

Where Can I See Rhinos in Their Natural Environment?

African rhinos may be found in the following nations’ natural areas.

Rhinos are classified as huge terrestrial animals, which explains why they live for a long time. But, of course, their life expectancy is affected by various factors.

These numbers are largely about animals kept in captivity. Because they are influenced by poaching, predators, and hunting, determining their life expectancy in the wild is extremely difficult.

Adult rhinos have only one serious hazard in the wild, according to experts: people.

However, it is relatively uncommon for juvenile rhinos to become prey to predators like hyenas, lions, wild dogs, and crocodiles.

All governments in nations where rhinos exist have enacted anti-poaching measures. They are also attempting to halt the illegal horn trade, which causes hunters to kill rhinos.

What are the most serious risks to rhinos?

The most significant risks to Asian and African rhinos include habitat loss, degradation, and poaching.

Even though international trading in rhino horn has been prohibited since 1977, illicit demand in Asia remains substantial, fueling poaching on both continents. In addition, isolation is a new hazard to the Sumatran rhino.

This species, of which just around 80 remain in a dozen non-viable subpopulations in Indonesia, is too dispersed to find mates and reproduce.

What is the significance of rhinos in the environment?

Rhinos are ecosystem engineers in the environments in which they reside. For example, grassland habitats with access to water are crucial for larger one-horned rhinos, and they assist in maintaining the quality of these grasslands and the waterholes in which they wallow, allowing ideal circumstances for other small herbivores that share the space.

Rhinos also disseminate the seeds of plants and fruits they eat in their feces.

There are now five rhino species. The biggest species are the white rhinoceros from Africa and the bigger one-horned rhinoceros from Asia. The good news is that these two species’ populations have increased due to local government initiatives.

These rhino species are now endangered due to habitat degradation and poaching. As a result, the number of rhinos now is twenty times lower than five decades ago.

Asian rhinos are further classified into three species, all critically endangered. The bigger one-horned rhino, the Javan rhino, and the Sumatran rhino are among these three species.

Asian rhinos were once prevalent in practically every part of Asia, but they are now only found in four countries: Indonesia, Bhutan, Nepal, and India. It’s worth noting that just 63 Javan rhinos remain in the wild.

The species is exclusively found in India and Nepal’s riverine grasslands and nearby woods. They live a grazing lifestyle and die between the ages of 35 and 45. Their gestation period is around 15 to 16 months. Every 2 to 3 years, mothers give birth to a single child.

These are the tiniest of all species and can only be found in Indonesia’s protected areas. Sumatran rhinoceros die between the ages of 35 and 40. The gestation period lasts around 16 months. Every three years, female cows give birth to a single child.

These are the most endangered species and can only be found in Indonesia’s Ujung Kulon National Park. Experts are unsure of their longevity, although they are expected to expire between the ages of 30 and 40. Gestation is likewise unknown, however, it is assumed to be between 15 and 17 months, as with other rhinos. Every 2 to 3 years, mothers give birth to a single calf.

There are two types of rhinos: white rhinos and black rhinos. They, too, were critically endangered, but their numbers have recently increased due to the efforts of local authorities, states, and international organizations. In Africa now, there are around 5000 black rhinos and over 20,000 white rhinos. They are primarily found in Kenya, Namibia, Zimbabwe, and South Africa.

Rhinos are beautiful animals nearly wiped off the face of the world in recent years, but new figures suggest that they are slowly rebounding. These animals have a reasonably long life span of 35-50 years.

After elephants, white ones are the second-largest land animals. The enormous creatures are primarily found in open areas in South Africa. Unfortunately, poachers are more likely than other species to be targeted. As a result, their average lifetime is falling, and they are gradually becoming extinct.

South African white rhinos can die between the ages of 35 and 40. Their gestation span is around 16 months. Every three to four years, females have a single calf.

These species may be found mainly in Africa’s savannas, grasslands, and tropical bushlands. They lead a nomadic existence and can die between the ages of 35 and 40. Their gestation period is around 15 to 16 months. Every 2.5 to 3 years, mothers have a single kid. However, twins can be born at any moment.

Despite their moniker, their skin is not black. The soil in these animals’ habitats is typically dark. As a result, their skin is frequently encrusted with black dirt. Experts believe this is why the beast was given its name.

Although two female Northern white rhinoceros exist in captivity, they cannot reproduce since there are no living male rhinoceros in the wild or captivity.

The rhinoceros is one of the most endangered creatures on the planet. The causes listed below will influence the age at which a rhino will attain. Tragically, their lives will be cut short.

Rhinoceroses have tough skin that protects them against most predators in the wild.

Also, because rhinoceros are one of the biggest land mammals, most predators will not assault a fully grown adult rhinoceros.

A powerful adult rhino has no animal predators. However, as rhinos age, they get weaker, making them vulnerable to risky assaults by large cats, crocodiles, African wild dogs, and hyenas.

Humans are the only predators that pose a threat to rhinoceros.

Baby rhinos are also prey for large predators, crocodiles, African wild dogs, and hyenas. Although, for the most part, the mother rhino will defend them and fight off any dangers.

When caring for their young, mother rhinos are pretty antagonistic.

Unfortunately, some individuals covet rhino horns. As a result, they slaughter rhinos and steal their horns. As a result, a rhino’s horn, like hair and nails, may regrow. Illegal poachers, on the other hand, will kill from a distance first, allowing them to go closer and remove the horn.

Countries with a Demand for Rhino Horns

Rhinoceros horn is used to make traditional medicine in several Asian nations. Some nations, particularly Vietnam and China, believe that medications derived from rhinoceros horns may heal practically any disease, including cancer. This misunderstanding has resulted in a thriving market for rhinoceros horns in various regions of Asia.

Even while the worldwide ban on trafficking rhinoceros horns has helped reduce some of the more heinous practices, the illegal market remains active. In addition, the growing demand for rhinoceros horns on the black market supports the poaching business.

Did you know that specific rhino conservation camps have securely removed rhino horns to prevent poachers from doing it themselves? In this manner, the rhino survives, and poachers do not take the horns.