How Long Do Seagulls Live?

Seagulls are widespread birds. They can be found on almost any coastline in the world, including areas with a shortage of other bird species.


They are known for their insatiable appetite, but how long do seagulls live? Are seagulls short-lived birds, or can they survive up to 20 years or more? In this article, we explore everything you need to know about the lifespan of seagulls. 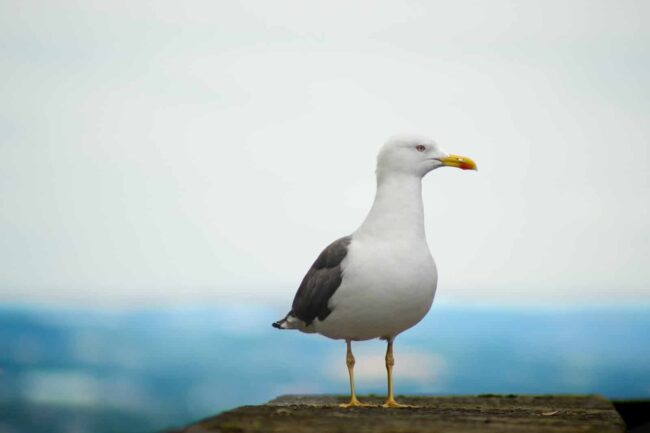 The Laridae family of seabirds includes seagulls, commonly known as gulls. Despite having some connections to skimmers, auks, and waders, their closest cousins are the Terns.

Nearly all gray and white raucous birds seen near the water have been called “seagulls.” The world is home to about 28 different seagull subspecies, though.

Seagulls may be found across the planet, including the high Arctic and the edges of the Antarctic continent. Although they may sometimes be found near freshwater sources, they are typically found along the coast. They differ from many other birds due to their very adaptable nature and intelligence.

How Long Do Seagulls Live?

The longevity of a seagull in the wild ranges from 10 to 20 years on average; however, this depends greatly on the species. For instance, it has been shown that ring-billed gulls typically live between 12 and 15 years; the familiar silver gull, or seagull, can live up to 30 years or more.

However, a seagull’s longevity is influenced by several circumstances. For example, a Herring gull, the oldest gull, was 49 years old. With a lifespan like that, gulls would rank among the longest-living bird species in the world.

When seagulls are wild, it is typical for other creatures like foxes, weasels, sharks, and cats to catch and consume them. This is one of the causes of their varying lifespans. Some birds don’t even live to be a year old, while others live to be 25. It is important to note that their first year of life is crucial. Most seagulls who pass through the first year typically die from natural causes.

Typically, gulls don’t reproduce until they are between the ages of 2 and 4. Gulls have extended life cycles. Larger gulls spend a large portion of their juvenile years roving at sea until they discover somewhere else to settle down and find a partner, then generally pair for life. They don’t attain full sexual development until they are 4 years old.

Seagulls are solitary creatures. In late March or early April, breeding seagull pairs begin courting. Nest building begins in early May. They deposit a clutch of three eggs early in May, and the young emerge in June. Because seagulls are precocial, their young hatch sighted and are already mobile.

In addition, young gulls can remain with their parents for months after fledging and are occasionally reluctant to separate from the family until the winter or early spring after the mating season.

Gulls have a more diverse environment than other birds do. They are content to live both along the coast and farther inland as long as there is plenty of food. Generally speaking, gulls are scavengers who devour any edible trash.

But they also like fish, prawns, shrimp, other tiny birds, and marine invertebrates. If possible, they would much prefer to find a dead fish in the port than to go out to sea and capture one. It is also known that they enjoy eating human food.

If you live near the seaside, you probably consider seagulls a nuisance. These birds are known to harm crops and risk human safety. Seagulls crash into airplanes more often than any other bird species.

Most gull species construct their nests close to densely populated human areas to scavenge food. As a result, they are high-risk disease carriers because they spend much time close to trash, inland rivers, and water reservoirs.

Despite all, these enormous birds are nonetheless protected by federal law in the U.S. and are regarded as migratory birds. Therefore, no one can capture seagulls from a particular area without a professional license or permission issued by the U.S. Fish and Wildlife Service.

Food availability, predator protection, and harsh weather are a few variables affecting seagull longevity. Young gulls’ chances of survival increase significantly and continue to increase with each passing year if they manage to survive the trials of their first year in the wild. Unfortunately, other animals in the wild also kill a lot of seagulls.

The following are some of the main predators of seagulls:

How do most seagulls pass away?

Old age and natural reasons like tiredness and exhaustion are how most gulls pass away.

Once they reach adulthood, gulls are tough and vigilant birds. Thus it is unlikely that they will perish from predation. Furthermore, huge protective flocks of gulls are notorious for chasing away large predatory birds, thereby sending them on their way off the hunt.

Seagulls can detect food from about three miles away and more

Seagulls are opportunistic feeders.  They have an extraordinary sense of smell and can detect even the smallest odor of food from a distance of up to three miles. These birds can readily discover food because of Jacobson’s Organs, extremely sensitive nerve endings in their nostrils.

The capacity of a seagull to locate food is essential to its existence. In addition, seagulls have an incredible sense of smell and a good vision that allows them to perceive objects up to two miles away.

In that they are monogamous birds, seagulls are similar to us. They will choose a partner and remain with them until one of them passes away, developing a lifetime attachment.

According to scientific research, Seagulls have been observed flying up to 35 mph in the wild.

There you go—seagulls can live up to 10 to 20 years in the wild on average, with some types even surviving up to 30 years. The oldest gull was a Herring gull who lived up to 49 years.