How Long Does a Tennis Match Last At Wimbledon?

Home  »  Sports & Activities   »   How Long Does a Tennis Match Last At Wimbledon?

Tennis is a sport that requires agility, endurance, and strategic thinking. It is one of the most popular sports in the world, with millions of people tuning in to watch professional matches.


The Wimbledon Championships are considered the pinnacle of tennis, with some of the best players in the world competing for two weeks. But just how long does a tennis match last at Wimbledon? 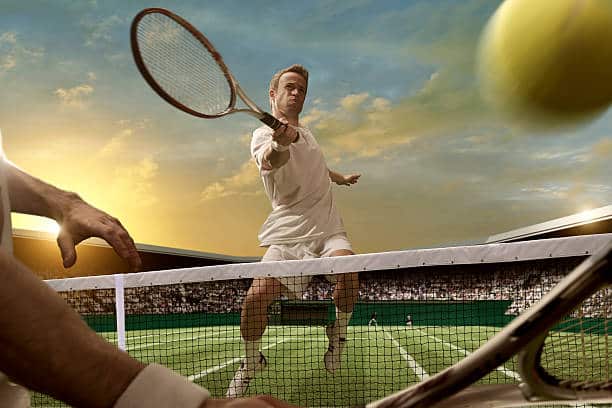 In this blog post, we’ll explore the length of singles and doubles matches at Wimbledon and discuss the factors that affect the duration of a match. We’ll also look at strategies to shorten matches, tips for spectators, and rules related to maximum playing time in professional tournaments.

The Length of a Singles Match at Wimbledon

Singles matches at Wimbledon can vary in length depending on several factors. Men’s matches require three sets to win, using a ‘best-of-five’ format, whereas women’s matches are two sets.

On average, these matches last an hour and a half and two hours.

The Length of a Doubles Match at Wimbledon

Doubles matches at Wimbledon follow the same general rules as singles matches, except that each side has two players instead of one. The deciding set is typically played in a super tie-break, which means that the first side to reach 10 points with a margin of two wins the match.

This makes for shorter matches, with the average match lasting around 90 minutes to two hours. However, some tournaments require players to play five sets, which can stretch out for considerably longer periods.

The Effect of Tiebreakers on the Length of Matches

Tiebreakers are a major factor in determining how long a tennis match at Wimbledon will last. When the score of a set is tied at six games each, a tie-break is usually played to decide the set. A tie-breaker is a single game to decide a set when the score is even.

The tie-breaker can often last much longer than a normal game, as there is no limit on the number of points that can be played until one player has won seven points with a two-point lead. Several tiebreaks have been attributed as the longest tiebreak in tennis.

Factors That Affect the Duration of a Tennis Match

How Weather Can Impact the Duration of Tennis Matches

Weather plays an important role in the length of a tennis match. While some players may prefer playing in hot weather, this can lead to longer matches. Hot weather leads to slower court surfaces, adding minutes to a match as rallies become longer.

On the other hand, cold weather can lead to faster court surfaces and shorter points. This can help shorten the duration of a match and make it easier for players to finish their match on time. In addition, rain delays can add extra time to a match, as play must be suspended until the weather clears. Players must stay prepared and adjust their strategy when facing changing weather conditions.

Timeouts and Breaks During Matches

Tennis matches offer players the opportunity to take a timeout or break during the match. At the international level, the International Tennis Federation (ITF) allows women two breaks during a three-set match; for men, three are allowed during a five-set match. These breaks can last from one to three minutes, depending on the tournament rules.

Additionally, players can take a break for medical reasons as needed. This is often done as a way for a player to rest and regroup after an intense rally or set of points. Also, breaks can adjust equipment or clothing, such as tying a shoe or fetching a towel.

However, since tennis games aren’t limited to a specific time frame, some matches only last 40 minutes, while others can last over three hours. To help keep the duration of matches consistent, tournaments use a 25-second clock that starts immediately after each point’s end and is enforced during play.

Strategies to Shorten the Duration of Tennis Matches

Tennis is a sport that has been notorious for its long run time. To shorten the duration of a match, players and tournaments have come up with strategies to reduce the amount of time spent on the court. One of the most popular methods is the introduction of tiebreakers at the end of a set. This helps to ensure that games don’t get too long and helps keep a match moving.

Certain tournaments are introducing the “Fast4” format, which reduces the number of sets to three and limits each set to four games. This helps speed up matches so that they can be completed in a much shorter time.

Other strategies include limiting the number of timeouts and breaks during a match and scheduling considerations for matches that are expected to go on for longer periods. Finally, rules related to maximum playing time in professional tennis competitions help ensure that matches don’t drag on too long and players don’t get exhausted from playing too many sets and games.

Understanding Court Surfaces and Their Impact on GamePlay

Tennis is played on a variety of different court surfaces. Each surface has unique characteristics that can affect the speed of the game and the length of matches. Clay courts tend to be the slowest and longest playing surface, while hard courts, such as those used in Wimbledon, are generally faster and shorter. Grass courts are known for their fast-paced nature and can make matches end more quickly.

In addition to the type of court surface, other factors, such as weather conditions and the ball used, can also contribute to the duration of a match. For example, the court will be slower if it’s raining, and longer rallies will be more common.

Similarly, a softer ball will cause shots to slow down and will often result in longer points. Understanding these various elements can help players adapt their strategies during a match to maximize their chances of success.

How Tournaments Are Formatted and Structured for Maximum Efficiency

For example, the ITF has set maximum playing times for singles and doubles matches, depending on the tournament format. These rules help ensure that matches are completed on time, allowing tournaments to move quickly from one round to the next. Additionally, the ITF has established a structure for Grand Slam tournaments that includes a different match format for women’s matches than for men’s.

This difference in format helps to ensure that women’s matches don’t take too long and can be completed in less time than men’s matches. Finally, the ITF has implemented a system of tiebreakers that can be used to conclude matches quickly when necessary. Tiebreakers are designed to provide a quick resolution to matches that may

Regarding scheduling considerations for longer matches, tournament organizers must ensure that the players have adequate rest time between matches. If a match ends late in the day, the players should be given enough time to rest and recover before their next match. Tournaments should avoid scheduling back-to-back long matches for any player, which could lead to exhaustion and poor performance. It is also important to ensure that the court surfaces are suited to the player’s style of play to minimize the chances of a match lasting longer than expected.

For example, if a match is being played on a grass court, it would be beneficial to the players to select a surface that won’t slow down their game and extend the match unnecessarily. Finally, tournaments should consider the possibility of long matches when scheduling matches and attempt to avoid having them overlap with other matches already in progress.

Rules related to maximum playing time in professional tennis competitions vary by organization. The International Tennis Federation (ITF) sets the standards for tournament play, and the Grand Slam tournaments, such as Wimbledon, are governed by their own rules. The ITF dictates that men’s singles matches must be completed in no more than two hours, while women’s singles may take up to three hours.

Men’s and women’s doubles matches may take up to three and four hours, respectively. In addition, all professional tournaments must have a tiebreaker system in place so that matches are not undecided. The tiebreaker is played at 12 games at Wimbledon, all in the final set. This ensures that matches are completed within a reasonable length of time.

Tips for Spectators Planning to Attend a Wimbledon Match

Attending a tennis match at Wimbledon is an exciting experience for anyone, regardless of their level of tennis knowledge. To make sure you get the most out of your experience, a few tips can help you prepare.

Tennis matches can vary drastically, but the average length of a singles match at Wimbledon is between two and three hours. Doubles matches tend to be shorter, typically lasting no more than two hours. Tiebreakers and the complexity of the playing surface can also affect the duration of a match, as can weather conditions and the strategies players employ.

Timeouts and breaks during matches can relieve the intensity, while spectators can plan by understanding court surfaces and tournament formats. Rules related to maximum playing time can help ensure that matches don’t become overly lengthy, while scheduling considerations can help tournaments keep their events on track. By understanding these factors, players, spectators, and tournament organizers can better anticipate the duration of each match.