How Long Does a Venus Fly Trap Stay Closed?

Do you have a Venus flytrap in your home or garden? You’ve probably noticed that these fascinating plants trap their prey inside their leaves, but have you ever wondered how long they stay closed after catching something? This blog post will explore the answer to this question and more!


How Long Does It Take a Venus Fly Trap To Close?

Understanding the Venus Fly Trap’s predatory mechanism is key to understanding how long it takes for a trap to close. When an insect, or other small creature, brushes against one of the trigger hairs inside the leaves, the trap is activated. 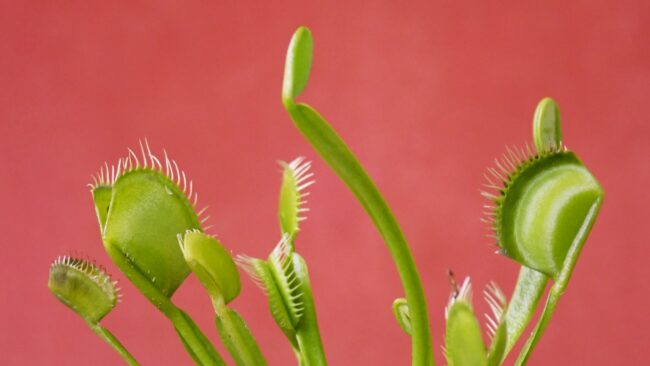 This triggers electrical signals that cause the lobes of the trap to close within a fraction of a second. After this process, the trap will gradually close tightly until it is hermetically sealed and filled with fluid. This process can take up to six to seven hours.

Once the trap is fully closed, it can take up to five to twelve days for the Venus flytrap to digest its prey and open its trap again.

What is a Venus Fly Trap?

A Venus Fly Trap is a carnivorous plant native to the wetlands of North and South Carolina. It is one of the most well-known carnivorous plants, and its unique trapping mechanism has fascinated scientists and gardeners alike. The Venus Fly Trap is a perennial plant and grows from a dormant winter state to its full size in the spring and summer months.

It has bright green leaves, which form a rosette shape. Each leaf is equipped with trigger hairs that are sensitive to touch. The trap closes when something brushes against the trigger hairs, trapping the prey inside. The trap can then slowly digest it over several days.

How Do Venus Fly Traps Work?

The Venus flytrap is a carnivorous plant that uses its specialized leaves to capture and digest insects. The leaves are modified, forming two ‘lobes,’’ which are held together by tiny hairs called ‘trigger hairs.’’

Electrical signals are sent to the lobes when an insect touches the trigger hairs, causing them to close. This trapping process is incredibly fast, taking only a fraction of a second. Once the trap is closed, the Venus flytrap will remain closed for 5 to 12 days, allowing it to digest its prey.

During this time, the trap will slowly open and close, to prevent the escape of any prey and bacteria. During digestion, the Venus flytrap secretes digestive enzymes into the trap to break down the insect before absorbing the nutrients.

After the prey has been digested, the lobes will slowly return to an open position within 12–24 hours. However, if further stimulation does occur, the trap transitions to the fully closed state, which takes more than 5–7 days to reopen.

The Venus flytrap is an amazing carnivorous plant that can catch and digest its prey in a matter of days. It utilizes an intricate process to do this, with the trap being the most notable feature. When a potential meal enters the trap, sensory hairs inside the trap will send out electrical signals to activate the trapping mechanism.

The lobes of the trap will then quickly close in a fraction of a second and remain closed for several days as the plant digests its meal. During this time, no further stimulation occurs, and the lobes will slowly return to an open position within 12-24 hours. However, if further stimulation does occur, the trap transitions to the fully closed state, which takes more than 5-7 days to reopen.

The Venus flytrap is a carnivorous plant with a unique digestive system. After a prey item has been captured, the trap closes and becomes airtight. This ensures that bacteria and other organisms are excluded from the trap and that the digestive enzymes can work undisturbed.

What Triggers the Closing of a Venus Fly Trap?

The Venus flytrap is an amazing plant that has evolved to be able to detect and capture prey. Its leaves are lined with tiny hairs, which act as sensors. When an insect or other small animal brushes against the hairs, it triggers an electrical signal that causes the leaves to close, trapping the prey inside.

This process can take just a fraction of a second to complete, depending on the size and type of prey. Once the trap is closed, it will remain shut for several days while the plant digests its meal.

Factors That Influence the Closing Time of a Venus Fly Trap

When it comes to the Venus fly trap’s closing time, several factors can influence how long the trap remains shut. For instance, the size of the insect that has been caught in the trap can have an impact on the closing time.

Larger insects will take longer to digest so the trap will remain closed for longer. Also, the type of soil the flytrap is planted in can influence its closing time. Venus flytraps need deep pots with around 4″ or 5″ of root growth and should not be planted in regular potting soil as it can kill the plant.

Lastly, the environment where the Venus flytrap is kept can also affect its closing time. If the temperature is too high or too low, the trap may remain closed for longer than usual.

Can I Help My Venus Fly Trap Close Faster?

The answer to the question of whether you can help your Venus fly trap close faster is a bit complicated. While there are some things you can do to increase the speed of closing, like providing the right environmental conditions or providing more stimulation, ultimately, the speed of the closing process depends on the Venus flytrap itself.

How to Feed Your Venus Fly Trap

Feeding your Venus flytrap is an important aspect of keeping it healthy. When your flytrap is closed, it cannot feed itself as it normally would. Therefore, it is important to provide it with food when it needs it.

The most common way to feed a Venus flytrap is with small insects, such as flies, spiders, or moths. You can also give it smaller pieces of meat, such as hamburgers, but make sure to cut it into small pieces that can fit into the trap. If you want to give your flytrap something other than insects, you can offer it a few drops of water or a dilute nutrient solution.

However, you should only do this once or twice a week, as overfeeding can cause the trap to close prematurely.

Keeping a Venus flytrap is not as hard as it may seem, but there are still some common problems that one should be aware of. If the trap is not closing properly, it could signify a lack of nutrients. The plant needs acidic soil to survive and should be fed regularly. If the trap remains closed for more than 12 days, it could signify that the insect it has captured is too large to digest.

If this is the case, the trap can be forced open with tweezers. If the trap is not closing tightly enough, it could be due to a lack of moisture. Ensure that the soil remains damp and that there is plenty of humidity around the plant.

Finally, if the trap is not closing, it could be due to a lack of sunlight. Ensure the plant gets at least four hours of sunlight a day. With the right care, your Venus flytrap will thrive and be able to close its traps in a fraction of a second!