How Long Does Concrete Take To Dry And Why?


What Exactly Is Concrete?

Concrete is a composite material of coarse and fine aggregate joined together with a fluid cement that hardens over time. 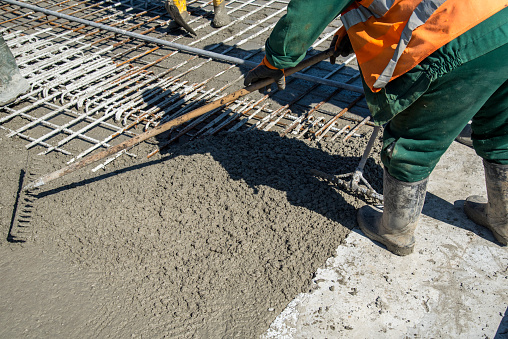 Contrary to common perception, cement and concrete are not interchangeable. The three essential components of a conventional concrete surface are aggregate (sand, rock, or gravel), ordinary water, and Portland cement.

When combined with aggregates and water, cement functions as a binding agent. As a result, this slurry is poured and smoothed before hardening into the long-lasting substance utilized in many building projects.

The manufacture of concrete is time-sensitive. Once prepared, it must be placed at the site of action as soon as possible before it hardens. Therefore, it is commonly assumed that concrete and cement are interchangeable.

However, this is not the case. Cement is used to make concrete. It is made by combining several ingredients like water and cement. These are manufactured in concrete tanks where cement and water are churned and mixed at high speeds. The concrete is made from the paste that results from this process.

How Long Does It Take For Concrete To Dry?

The answer is that the concrete never completely dries and cures. Instead, it becomes more and more harsh and dry with each passing day. Lukewarm water can be used to speed the process of concrete setting and drying. The process accelerates when lukewarm water is added, and bond formation occurs.

However, the hardening that occurs in 24-48 hours is sufficient to prepare it for walking without leaving any traces. The table below indicates how long it takes for concrete to dry to execute certain operations without being deformed:

How Long Does It Take for Concrete to Completely Cure?

The answer is that concrete never entirely cures. On the contrary, it is always stiffening a little more each day. This is because concrete hardens due to the cement particles interacting with the water in which it is mixed.

The concrete hardens as the cement joins with the water molecules. Because there are always microscopic moisture bubbles in your concrete, it will continue to harden even after it has reached what is often referred to as “full strength.”

The actual question is, how long does it take for concrete to cure enough for whatever your intentions are for the concrete. How long, for example, until you can walk on it without leaving tracks, drive or park on it without sinking into it, and so on.

You should be able to drive over it without destroying it, but you should avoid rolling big equipment over it. You may regard your concrete as fully hardened after 28 days.

What exactly is curing, and what effect does it have on concrete?

When people think about curing, they think of keeping moisture on the concrete’s surface. But curing is more than that; it provides the concrete with the nutrients it requires to strengthen properly. The strength of concrete is determined by the development of crystals inside the concrete matrix.

These crystals form due to a hydration reaction between Portland cement and water. If insufficient water, the crystals cannot form, and the concrete does not generate the necessary strength. If there is enough water, the crystals form into tiny rock-hard fingers that wrap around and intertwine with the sand and gravel in the mix. It almost sounds like a scene from a horror film—our concrete baby has transformed into a monster!

Hot concrete has the opposite problem: the reaction occurs too rapidly, and because the process is exothermic (it generates heat), temperature differentials inside the concrete can quickly occur, leading to cracking. And cement that responds too soon doesn’t give the crystals enough time to form correctly, so it doesn’t acquire as much strength as it should.

What Is the Difference Between Curing, Drying, and Setting Concrete?

Concrete is composed of cement, sand, and other aggregates. It contains terminology that implies something vital within that profession, much like most sectors of the construction business or any industry. Curing, drying, and setting are time-sensitive processes that occur within concrete after it has been poured and installed.

Curing is defined as keeping enough moisture or humidity of 80% and a temperature of more than 50°F for 3 to 14 days following the pour. Because curing is a chemical process, it will never truly finish if moisture is present. So, even though concrete is said to cure in 28 days, it will continue to react as long as moisture is available.

Drying does not refer to the physical process of drying. Instead, drying is the process of preparing the conditions for concrete to cure to the moisture content required for its intended usage or the application of floor finishes.

Concrete may take 24 to 48 hours to cure sufficiently to walk or drive on and 28 days to dry completely. Because wood, vinyl, linoleum floors, and epoxy coatings do not breathe and can interfere with the curing process, concrete should have a moisture vapor emission rate (MVER) of 3lb/1000sqft/24 hours or less to be declared dry.

Setting refers to the slow transition of fluid concrete to hard concrete or the stiffening of concrete after it has been put. It is the product of the development of calcium silicate hydrate and ettringite. The setting phase finishes when the concrete becomes unworkable and is frequently influenced by the amount of water in the mix. However, the concrete is still soft and has to cure and dry before it can harden to its full strength after setting.

Concrete starts to harden after 30 minutes of being placed and is deemed complete after 10 hours. A Penetrometer measurement of 3.43MPa or 500psi indicates the beginning of hardening, while a reading of 26.97MPa indicates the conclusion of hardening.

How Does Concrete Dry?

Over time, concrete dries gradually. Water evaporates off the surface after the initial pour and placement. Moisture within the concrete mass is pulled to the surface via capillaries to replace evaporated water, and it is also evaporated.

What Causes the Hardening of Concrete?

Concrete is a precise combination of Portland cement, aggregates such as sand and gravel, and water. When combined with water, it takes on the consistency of a slurry or cake batter. Portland cement comprises dicalcium and tricalcium silicate, which add strength and hardness to concrete, tricalcium aluminate, tetra calcium aluminoferrite, and gypsum.

When water is added to cement, it hydrates, causing chemical processes that build links between the aggregate material and the cement. For example, tricalcium silicate responds faster to generate the initial bond strength, but dicalcium silicate reacts slower and contributes to the strength after 7 days.

How Long to dry indoors

A concrete floor must hydrate to produce the crystalline connections that harden the concrete indoors or outside. The humidity and temperature within a structure can hinder or speed up the initial binding and brighten the concrete’s color as it solidifies.

Indoors, humidity and temperature may be simpler to manage, which may speed up the hardening process and allow it to carry greater weight sooner. On the other hand, the chemical process of hydration should not be regarded as complete until 28 days have elapsed.

What Are Some of the Factors That Influence the Drying Time of Concrete?

How long does it take for concrete to dry under different conditions? Concrete drying durations are not always uniform from one scenario to the next. A variety of factors can influence concrete drying time. Among them are the following:

How to Dry Concrete More Quickly

Some additives can speed up the setting time of concrete and other procedures that will harden concrete faster so that it may be utilized sooner.

The type of concrete used might also have an impact on drying time. However, regardless of the manner or kind of concrete utilized, it will still take 28 days for concrete to reach 99 percent strength.

Prior Before the Pour

There are several methods for accelerating concrete’s initial setting and drying phases before it is poured. For example, the first drying time can be reduced using less water or a greater cement percentage. In addition, pouring on a hot, sunny day will hasten the process.

When mixing the concrete, use warm water instead of cold water. Before pouring, lay down a barrier to prevent ground moisture from being drawn into the concrete, making drying simpler and faster.

There are numerous strategies to speed up drying once the concrete has fully built up so that it may be used sooner. For example, dry or regular curing will take longer than wet curing, and pond curing will take even less time. Controlling humidity and temperature are two more well-known methods for hastening to dry.

Dehumidifiers can remove moisture from the air, allowing moisture to be drawn from the concrete more quickly. In addition, keeping windows and doors closed when running dehumidifiers reduces relative humidity inside and prevents moisture from entering from outside.

Warm temperatures cause concrete to set and dry faster than cold temperatures; thus, heaters raise the temperature to speed up drying.

Covering the pour with a concrete blanket or black plastic sheeting can warm the surface and trap escaping moisture, resulting in a faster cure and a stronger product. Troweling procedures can also aid in drying. It should be noted, however, that overtroweling or forceful troweling might restrict capillary pores in the concrete and cause it to dry slowly.

Moist-curing and pond curing are two alternative methods for drying concrete quicker than air drying. They both employ water to speed up the curing process and strengthen the concrete, allowing it to dry faster.

Wet or moist-curing reduces drying time by soaking the concrete surface 5 to 10 times each day for up to 7 days. Pond curing employs berms or containment around the pour to keep 4″ to 12″ of water on top of the concrete. It has the same effect as moist-curing, except it takes three days instead of seven, allowing for faster drying.

Concrete is a composite substance that supports the infrastructure. It is essentially a cement and water combination. It’s made in concrete tanks. The hardening of concrete is a continuous process.

Concrete drying is generally continual, but after 24-48 hours, the concrete is sufficiently cured for a person to walk over it without generating dents or deformations. It is enough dried in 7 days for a car to drive over it, and it is sufficiently dry in 28 days for large rollers to roll over it.

As a result, hydration energy, tensile strength, and water utilization are primary parameters that influence the concrete drying and setting process.