How Long Does It Take Lava To Cool?

Curious about lava? Ever wondered how long it takes for it to cool?


Well, you’re lucky – we’ve got all the answers here! From how hot it is to the different cooling methods used, we’ll look at what makes this amazing natural phenomenon unique. 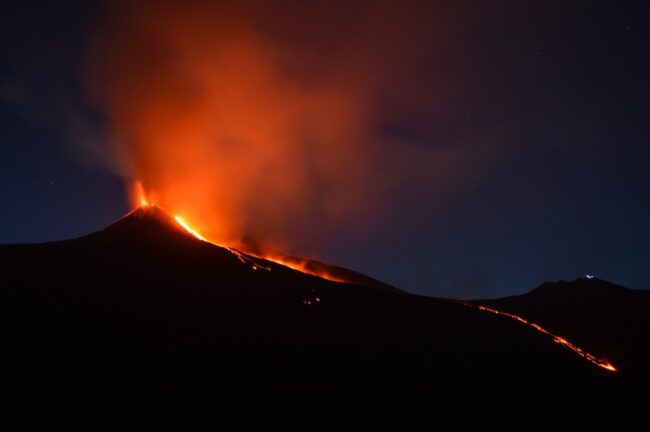 So grab your seat and prepare for an educational journey into the fascinating world of lava!

TL;DR: How Long Does it Take for Lava to Cool?

The answer is simple and complex for those who are wondering just how long it takes lava to cool. The initial cooling process of the thin crust that forms on the surface of the lava flow can happen in as little as 10-15 minutes.

However, a thicker flow can take over 130 days to cool down completely. It is important to note that the time frame can vary depending on various factors, such as the thickness of the lava flow, whether it has reached the sea or is still flowing, and the environment’s temperature.

Lava is a molten rock material formed when magma rises to the surface of the Earth. When lava erupts, it can be incredibly hot and move quickly, but how long does it take to cool? Understanding the cooling process of lava is key to understanding volcanic eruptions and the hazards they present.

While basaltic lava cools in days or weeks, larger eruptions can take years to cool completely. Temperature varies significantly during the cooling process, so it is important to understand how quickly lava cools and what factors affect its cooling rate.

Basaltic lava flows cool quickly, forming a thin crust that insulates the interior of the lava flow. Within minutes, it will be cool enough to touch. Studies of lava flow cooling rates have found that it takes more than 130 days for a flow this thick (about 4.5 m or 15 ft) to cool completely.

Temperature Drop of Lava after Traveling from Volcano to Sea

When magma or lava is expelled from the interior of a terrestrial planet, it begins to cool down as it travels. Scientists have measured the temperature drop of lava after it has traveled from the volcano to the sea, and it is only 10 degrees cooler.

This cooling effect can last for months to years, depending on the characteristics of the eruption. In addition, the cooling rate of the lava is affected by its composition and the difference in temperature between it and its surroundings.

This can affect how long it takes for lava to cool and solidify, so safety precautions should be taken when dealing with lava.

Why Does Lava Cool So Quickly?

Lava cools very quickly at first and forms a thin crust that insulates the interior of the lava flow. This is because lava is a poor conductor of heat, meaning it doesn’t transfer heat energy as quickly as other materials.

The thin crust acts like a shield, preventing heat from escaping outwards and allowing the lava underneath to cool faster than other materials. Solidifying lava also releases energy from light, sound, and heat, which helps speed up cooling.

As the lava cools, it hardens and forms new rock on the volcano. All these factors contribute to the quick cooling of lava.

The rate of cooling of lava is affected by many factors. The lava’s composition, the temperature difference between it and the environment, and the presence of other substances in the atmosphere can all affect the rate of cooling.

Dynamic rheology, or the flow of lava, can also influence its cooling rate. Gases and dust particles thrown into the atmosphere during eruptions can also affect climate. All these factors play a role in the cooling rate of lava.

What Happens After Lava Reaches the Sea?

When lava reaches the sea, it interacts with the cooler water, forming a new material known as ‘tephra.’ This material comprises fragmented lava, ash, and other volcanic byproducts. Tephra is incredibly light and can float on the ocean’s surface long before eventually sinking to the seafloor.

As the tephra cools, it forms a rock known as ‘pillow lava,’ which has an uneven texture and an interesting shape. The interaction between lava and water can also create lahars, hot mudflows that travel down the slopes of volcanic mountains. Lahars are extremely dangerous and can cause significant destruction in their path.

How to Measure the Temperature of Lava

By tracking the temperature, scientists can accurately estimate how long it takes for lava to cool completely. Such measurements are important for monitoring active volcanoes and predicting potentially hazardous flows.

Uses of Lava Once Cooled

Once lava has cooled, it can be used for many different purposes. One of the most common uses is as an aggregate for construction projects. Lava rocks are often found in road construction, breakwaters, and dams. It is also used to create sculptures and works of art.

The cooled lava can even be processed into a usable soil conditioner that is beneficial for gardening and landscaping. Lava is a versatile material with many applications in commercial and residential projects.