How Long Does It Take To Play a Game of Backgammon?

Ready to learn how to play a game of Backgammon? Whether a beginner or an experienced player, you may wonder how long it takes to finish a game. We’ve got all the answers here!

Backgammon is a classic two-player board game that has existed since at least the 16th century. The game is played on a specially designed board with four tables of six thin triangles or points on each table. 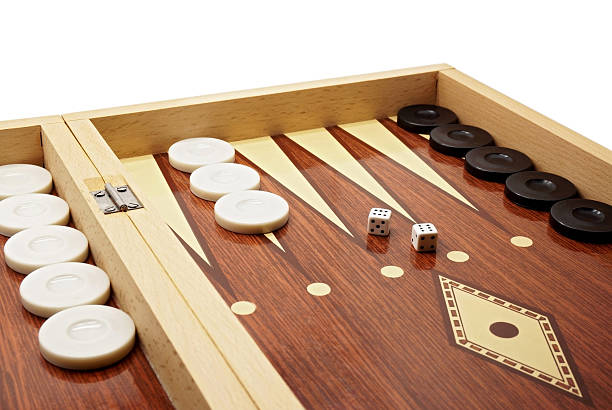 Players take turns rolling dice and moving their checkers around the board to be the first to bear off (remove) all their pieces. This game of strategy, luck, and skill has a long and storied history and is still enjoyed today by millions of players worldwide.

Getting Started: Choosing Your Pieces, Setting Up the Board, and Rolling Dice

Getting started with a game of backgammon doesn’t take much time. All you need are two players, a backgammon board, and a set of checkers. To start the game, each player throws a single die to determine who goes first and the numbers to be played.

If equal numbers come up, it’s a tie, and the second round of dice is thrown. Once the order of play is determined, the players can begin to set up their pieces on the board. This can take anywhere from 10 to 30 seconds, depending on how quickly the players move.

Once the pieces are set up, players take turns rolling the dice to move their pieces around the board. This part of the game can take anywhere from five to sixty minutes, depending on how long it takes for a player to make their moves and how experienced both players are.

Experienced players who are familiar with backgammon strategies, doubling cube usage, and other advanced techniques may take longer to make their moves.

Backgammon is a game of strategy and tactics, so understanding the rules and learning some basic strategies is key if you want to win. It takes some time to learn the ropes, but it’s not too difficult to pick up. A typical game of backgammon, ignoring the doubling cube, takes around fifteen minutes, so even beginners can learn the rules and start playing in no time.

Strategy and Tactics: Tips for Winning

To win a game of backgammon, you need to understand the strategies and tactics that can give you an edge. The most important strategy is to ensure all of your pieces are in your home board, giving you the best chance of successfully bearing off.

This can help you win the race and bear off your pieces first. Finally, you should always try to use the doubling cube if available, as this can help you increase the stakes and gain a better position in the game.

Timing: How Long Does a Game of Backgammon Take?

Backgammon is an exciting game that has been around since 1646 and can take anywhere from five to sixty minutes to play. The time it takes to play a game of backgammon depends on the number of points being played and the skill level of the players.

For instance, a 5-point match between two experienced players who know how to use the doubling cube efficiently takes around 45 minutes. An absolute beginner can learn the rules and complete a 10-point game in an hour or less.

The game’s objective is to move all of one’s checkers to the home board and bear them off the board entirely. To start the game, each player throws a single die that determines the player to go first and the numbers to be played.

After the pieces are placed on the board, the players must use strategy and tactics to move their pieces to win. The doubling cube is an important part of the game and can greatly influence the time a game of backgammon takes to complete.

Advanced players may use additional rules and variations to make the game more challenging and competitive. For example, the Jacoby Rule and tournament rules can add complexity to the game. To become a more experienced player, learning backgammon strategies, tips, and advanced techniques is important to help develop your skills.

In summary, a game of backgammon can take as little as five minutes or as long as an hour, depending on the number of points being played and the skill level of the players. Learning backgammon strategies, tips, and advanced techniques is important to become a better player and ultimately reducing the time it takes to complete a game.

The Basics of Doubling Cube Usage

The basics of doubling cube usage are an essential part of the game of Backgammon. The doubling cube is a six-sided die with the numbers 2, 4, 8, 16, 32, and 64. It increases the game’s stakes, with each player having the option to double them at any point.

This can be done during the game by either player when it is their turn, and the other player can accept or decline the double. If accepted, the cube is placed in the middle of the board, and the player who offered the double takes ownership of it and has the right to make the next double.

If declined, the player who offered the double loses the game and the stake for that game. Knowing when and how to use the doubling cube is an important part of the game and can decide the outcome.

The Rules of Bearing Off and Winning the Game

Once you have all of your pieces on the home board, you can begin bearing off. Bearing off is the act of removing pieces from the board and is usually the last phase of the game. A player can only bear off a piece corresponding to the number they roll on the dice. If a higher number is rolled than the pieces remaining on the board, the player can bear off their highest checker. The player who successfully bears off all their pieces first wins the game.

The rules of bearing off and winning the game are essential for any player who wants to succeed in backgammon. Before attempting to bear off, it is important to understand the implications of the doubling cube and how to use it to your advantage. Additionally, it is important to understand the different strategies and tactics that can be employed to help improve your chances of winning.

Backgammon is a game of finesse and strategy, but that doesn’t mean that the rules are set in stone. Advanced players may want to add a few additional variations to their game.

One of the most popular variations is the Tournament Rule, which allows players to use the doubling cube even if it is not their turn. This rule is most often used in tournaments, as it ensures that both players get an equal chance to double, thus increasing the game’s stakes.

Another popular variation is the Jacoby Rule, which states that a gammon (or backgammons) count as two points instead of one. This rule is often used to speed up the game and make it more exciting. Adding these variations to your game can take your Backgammon skills to the next level.

Learning how to play backgammon can be an enjoyable and rewarding experience, but it requires great skill and strategy. As a beginner, it can be difficult to understand all of the rules and strategies quickly. Fortunately, some basic strategies can help you get started and give you the confidence to take on more experienced players.

The most important backgammon strategy for beginners is to focus on building points. This means that you should try to move your pieces around the board in such a way that you create points or “builds.”

These builds will give you a better chance of getting your pieces off the board and winning the game. Also, it is important to pay attention to your opponent’s moves and try to anticipate their strategy. This will help you to develop a plan of attack and counter their moves.

Another tip for beginner backgammon players is to focus on safe moves. If you don’t have any good moves available, it is usually better to play conservatively and protect your pieces from being captured.

It is important to remember that backgammon is a game of patience and that it is often better to wait for the right opportunity to make a move rather than rush ahead.

Finally, practicing playing backgammon and learning from your mistakes is important. As you practice and get more comfortable with the game, you will better understand the strategies and tactics involved. This will help you become a better player and increase your chances of winning in the long run.

Now that you have the basics of backgammon, it’s time to start thinking about strategy. Intermediate backgammon players can benefit from more advanced techniques, such as backgammon opening theory.

Opening theory refers to the moves you make at the beginning of the game, which can significantly impact the outcome. The most successful players are usually familiar with the most common opening strategies. Intermediate players should focus on developing their knowledge of doubling cube usage, which is an important part of the game.

Blitz tactics involve playing very quickly and aggressively, while backgammon strategy involves carefully planning your moves. The key to winning with advanced techniques is to make sure you are familiar with the rules and strategies of backgammon and to practice them regularly.

Knowing how to use the doubling cube and bearing off efficiently is also essential for advanced players to master. With practice, you can become an expert at backgammon and dominate the game!

The Backgammon Glossary is a great way to understand the game and its terms. It is important to know the terms used in the game, so you can communicate with your opponents and understand their moves. The most common words used in a game of Backgammon are:

These terms will come up often when playing backgammon, so it is important to familiarize yourself with them before you start playing. Knowing these words will make it easier to understand what your opponents are doing and help you make the best moves possible.