How Long Does It Take To Play a Game of Risk?

Are you looking for the perfect game to play with friends and family? Do you want a game that’s challenging but not too long? If so, Risk might be the perfect game for you. But how long does it take to play a game of Risk?


In this blog post, we’ll answer that question and more so that you can decide if Risk is the right game for your next gathering. 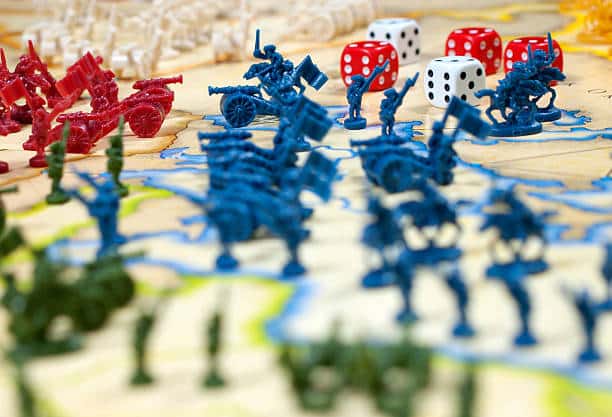 Understand the Rules of Risk

It is important to understand the rules to understand how long it takes to play a game of Risk. Risk is a strategy game for two to six players and has been around since 1959.

The game’s goal is to conquer the world by taking control of all the territories on the board. Players must deploy their armies, attack their opponents, calculate their attack strengths, and use cards to their advantage.

The game setup time can take five to fifteen minutes, and the game can take anywhere from one to eight hours, depending on the number of players, strategy, and luck. Knowing the game’s rules will help you determine how long it will take to play a game of Risk.

Choose the Number of Players

Choosing the number of players for a game of Risk is important in determining how long it will take to finish the game. The more players there are, the longer the game will take. Generally, Risk games take about 5-15 minutes to set up, which can take anywhere from 1-8 hours to complete.

It’s important to note that these times vary depending on the number of players, as well as the skill level of the players. If there are more experienced players in the game, the game may take less time than if there are fewer experienced players. So, when deciding how many players to include in your game, consider how long you want the game to last and choose accordingly.

Once you understand the game’s rules, it’s time to gather the materials needed to play. The classic board game of Risk requires basic materials such as dice, cards, and a world map. Depending on the version of the game you have, the number of dice needed can vary, so be sure to check the instructions for the exact number of dice required.

Set Up the Board

Now that you have all the materials you need to play a game of Risk, it’s time to set up the board. This part of the game takes the longest, so it’s important to be patient and focused as you go through the process.

Depending on the number of players, it can take 5-15 minutes to set up the board. You’ll need to place all the countries, cards, and armies in the right spots to start the game. You’ll need to divide the world into two or three sections if you’re playing with more than four players. Each player will get one or more board sections during their turn. Once the board is set up, you can begin playing.

Learn the Game Pieces and Their Values

Once all players have deployed their armies, they can start to take turns and take territories. Before they do this, however, they must first learn the game pieces and their values. Each game piece represents a certain number of armies and has a specific meaning.

Once all players have deployed their armies, it’s time to determine who goes first. To decide this, each player will roll a die, and the player with the highest roll will go first. This is a great way to start the game, as it gives the first player an advantage.

The player who goes first will be able to choose territories and accumulate resources to build an even bigger army, giving them an edge. After the first player has taken their turn, the next highest roll will go, and so on, until all players have taken their turn.

Once the board is set up, the players can deploy their armies. Before the game begins, each player will choose a color or country to represent them. The players will then take turns placing their armies onto the game board.

Depending on the number of players, the amount of time it takes to deploy the armies can vary. Generally, it will take 10-15 minutes for all the players to deploy their armies. During this time, players should use strategy to determine where their armies will best serve them. After the armies are deployed, the game is ready to begin!

Once the game starts, it’s time to take turns and territories. Players take turns in a clockwise direction. During each turn, the active player can make three moves: deploy their armies, attack an enemy territory, and move their armies. Players can also use any cards earned to gain an advantage over their opponents.

Finally, the player can move armies from one territory to another. This can be done to reinforce a weak position or to launch an attack from a more advantageous position. Moving armies is a strategic maneuver and can often be the difference between victory and defeat.

Once the active player has completed their three moves, the turn passes to the next player in a clockwise direction. The game continues until one player conquers the world.

Once all the game pieces are deployed, it is time to take turns and take territories. Each turn is made up of several steps. The first step is calculating your attack strengths. During each turn, you can attack one of your opponents’ territories with forces from one of your territories.

The more forces you have in the attacking territory, the better your chances of success are. The defending player rolls one die, and the highest roll wins the battle.

Use the Cards to Your Advantage

Using cards in Risk can give you a strategic advantage in the game. When you collect a set of Risk cards, you earn bonus armies that you can use to gain control of territories. Depending on the number of players, a set of Risk cards can be worth up to 50 armies.

You can also use the cards to form alliances with other players and trade territories. However, Risk cards can also bring your opponents down if you have a tactical advantage. Knowing when and how to use Risk cards is key to winning the game.

End the Game When One Player Conquers the World

Once the game is down to one player, that player has conquered the world and won the game. Depending on the number of players, the game can take between one to eight hours. The more players, the longer the game will take.

It is important to remember that some of the game’s duration also includes the setup time, which usually takes five to fifteen minutes. It is important to plan and ensure that everyone playing has the time to commit to the entire game.