How Long Does It Take To Play a Game of Yahtzee?

Do you love playing board games? Are you looking for a new game that’s easy to pick up and play but still challenging? If so, Yahtzee is the perfect game for you!


In this blog post, we’ll explore how long it takes to play a game of Yahtzee—so you can decide if it’s the right fit for your next game night. 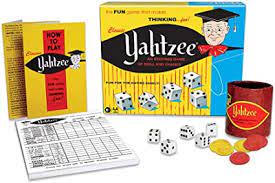 Yahtzee is a classic dice game that people of all ages have enjoyed for decades. It’s a game of luck, strategy, and some math. The game’s goal is to get as many points as possible by rolling five dice and combining them into different combinations.

How Long Does It Take To Play a Game of Yahtzee

The game’s length depends on the number of players and the speed at which they play. Generally, a game of Yahtzee takes about 30 minutes to an hour to complete.

Yahtzee is a popular dice game that combines luck, strategy, and fun. The rules are simple to learn, and the game can be completed in under an hour.

To play Yahtzee, you’ll need five dice, a scorecard, and two or more players. The game’s goal is to score the most points by rolling and scoring dice combinations.

Players are given three rolls during each turn, where they can choose to either keep their roll or re-roll any or all of the dice. After the third roll, players must choose which combination to score.

Players continue to take turns and roll the dice, with the game ending after 13 rounds. The player with the highest cumulative score at the end of the game wins.

Yahtzee is a great game for all ages and can be played in small and large groups. With some luck and strategic thinking, you can become a Yahtzee master in no time.

To begin a game of Yahtzee, you will need a set of five dice, a scorepad, and a pencil. All of these materials are typically included in a Yahtzee game set.

Additionally, depending on the number of players, you may need additional sets of dice and score pads. Yahtzee is best played with 2-10 players, with a party of 3 or 4 being the optimal amount of players. Once you have all the necessary equipment, you can set up the game and begin playing.

How to Set Up the Game

Now that you know the rules and the equipment needed, it’s time to set up the game. To begin, each player should take five dice and a scorecard. The scorecard is used to track the scores for each round, with 13 boxes to track the cumulative score for each combination rolled.

The player with the highest total from their five dice rolls goes first. The players then turn clockwise, each rolling the dice up to three times per turn. Once a player is satisfied with their role, they can score it or hold it for the next round.

Gameplay Overview of Yahtzee is an easy-to-learn dice game that all ages can enjoy. The game is made up of 13 rounds, and each round is played in a clockwise order beginning with the starting player.

Each player takes turns rolling five standard dice to attempt to get the highest possible score in the thirteen different categories. The game is over when each player has completed all thirteen categories.

Scoring can be done after the first, second, or third roll of the dice and the highest cumulative score wins the game. With a few simple rules, Yahtzee can be enjoyed by two to ten players, with three or four being the recommended number.

Scoring in Yahtzee is about maximizing your dice combinations to earn the most points. The game is divided into two main sections: the Upper Section and the Lower Section.

In the Upper Section, you can earn points for each of the six dice combinations. For example, you can score points for rolling three-of-a-kind, four-of-a-kind, a full house, a small straight, a large straight, and a Yahtzee.

In the Lower Section, you can score points for each of the five dice combinations and bonus points for total scores. To maximize your score, it’s important to understand when to take a score and where to score it.

Depending on your strategy and the dice rolls, you may want to take a score after the dice’s first, second, or third roll. Additionally, you’ll want to consider whether a score should go in the Upper or Lower Section. With some practice and knowledge of the rules, you can become an expert at scoring in Yahtzee.

Common Variations of the Game

Yahtzee is a popular game that can be played in various ways. Several common variations can be employed to make the game more interesting or change the strategy.

The “Wildcard” variation is when players can choose any combination of dice for their score. Lastly, the “Categories” variation is where players must choose a specific category to score each round. No matter which variation you choose, Yahtzee is a fun game that people of all ages can enjoy.

Playing Yahtzee can be tricky and requires some strategy to ensure a successful win. There are several strategies to keep in mind to increase your chances of winning.

Firstly, it’s important to understand the odds of each roll. Knowing the probability of rolling a certain combination of dice will allow you to decide when to take a score and when to keep rolling. Calculating the odds for each roll is an important skill for success.

It’s also important to remember that it’s possible to receive a bonus of 35 points if all dice show the same number. This bonus can be the difference between a win and a loss.

It’s also important to pay attention to other players’ scores and adjust your strategy accordingly. Notice that one of the other players has scored a high number in a certain category.

It might be beneficial to focus on a different category to take advantage of the remaining points available. In addition, it’s important to remember that while scoring in the Upper Section is important, it’s also important to score in the Lower Section to maximize your points.

Frequently Asked Questions are a great way to understand Yahtzee better and how it is played. Many questions come up when playing the game, and these are some of the most common ones.

If you’re looking for alternatives to Yahtzee that still offer a competitive, fun dice game, then you’ll want to check out some of these popular options.

Farkle is a fast-paced game with simple rules and exciting gameplay. Bunco is another popular dice game that’s easy to learn and can be played with a large group of friends. For a more strategic take on dice rolling, try out Kismet. This game requires more strategy and luck than Yahtzee, making it an exciting challenge for all players.

Finally, Liar’s Dice is a classic game that can be played with as few as two players and is sure to bring plenty of laughs. Whichever game you choose, you’re sure to have an enjoyable time.