How Long Does Monistat-1 Stay Inside You?

A single-dose combination package called Monistat-1 is used to treat vaginal yeast infections. It comes with a vaginal cream and a pill. 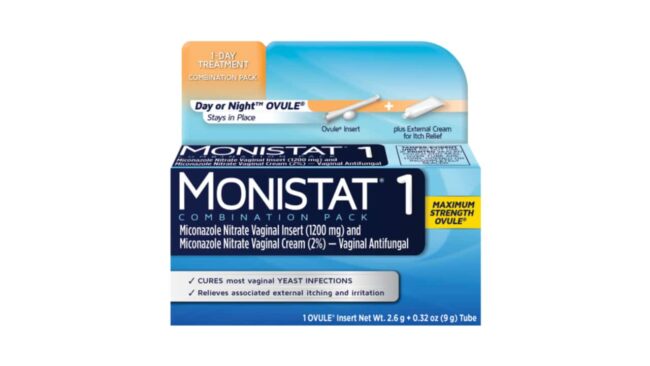 Burning, itching, redness, and a white discharge from the vagina and vulva are signs of a vaginal yeast infection.

An ovule insert with the highest over-the-counter strength dose is included in the Monistat-1 Yeast Infection Treatment Combination Pack, along with external itch cream for symptom alleviation.

How long does Monistat-1 stay in you?

Monistat-1 is made vaginal area for seven days without requiring daily reapplication. You can experience some medication discharge or leakage when taking the medication, which is typical. Applying Monistat-1 before bed is said to be ideal.

How should I use Monistat-1?

Read all of the instructions on the product package before using the over-the-counter remedy if you choose to self-treat. Ask your pharmacist any queries you may have. Use this medication as instructed if your doctor has prescribed it.

The Monistat 1-Day Treatment Combination Pack comes with a single Ovule insert applied directly into the vagina and a lotion to soothe itching and irritation on the outside. The Ovule insert must be kept dry before usage.

How to insert the ovule

The Ovule should be inserted into the applicator’s top (wider) end after opening the pouch. Once the ovule is safely contained within the applicator, put the top end of the device as far into your vagina as it is comfortable to do, much like a tampon.

Your finger should be used to push the movable plunger in so that the Ovule can be put into your vagina. Pull out the empty applicator carefully, then discard it (do not flush). To transfer medication right to the illness, the ovule gradually melts.

How to apply the external itch cream

You can apply the supplied itch cream to the skin outside your vagina for up to 7 days to treat external itching and irritation. When necessary, use the cream twice daily—once in the morning and once before night.

The only use of this product is vaginal. Your medical condition and treatment response will determine your dosage. Depending on the product being used, take the drug once daily at bedtime for 1 to 7 nights or as prescribed by your doctor. The single-dose tablet can be taken either before bed or during the day if you’re utilizing it.

The first line of treatment for yeast infections is an antifungal medication known as azoles. The most common dosages for short-course therapies are three and seven days.

These drugs come in the following forms:

The most popular short-course OTC medications are:

When applied, these drugs may cause a slight stinging or discomfort.

Although fluconazole (Diflucan) is frequently administered as a long-term treatment, a single oral dose can also be prescribed.

Diflucan is a potent drug. A powerful single dose could have negative side effects.

These may consist of the following:

Because of this, or if your infection is severe, your doctor could advise taking two or three doses.

The gold standard for long-term antifungals is azoles, much like short-course vaginal therapy. Your doctor will probably recommend a 7- or 14-day pharmaceutical regimen.

The three most popular long-term drugs are:

Alternative birth control options should be considered because these drugs also have oil-based formulations. These drugs’ oils may deteriorate the latex in condoms or diaphragms.

Can I use Monistat 1 while on my period?

You can take Monistat 1 while you’re menstruating. In fact, due to hormonal fluctuations, many women experience vaginal yeast infections right before their period.

Monistat 1 can be used throughout your period without affecting how well it works. You should finish the entire course of treatment if you’ve started it and your period comes. When using Monistat 1, avoid tampons as they may draw some of the medication out of the vagina. Instead, use pads or sanitary napkins, and swap them out frequently.

How long does it take an ovule to dissolve?

The ovule dissolves inside the vagina in about 40 minutes, during which time it develops a coating on the vaginal wall. Any leaking should be prevented by the product’s ability to maintain consistency following implantation.

What to avoid when applying Monistat-1?

Avoid wearing tight synthetic clothing, such as pantyhose, that restricts airflow when using Monistat-1. However, until the illness has cleared up, you should wear comfortable, loose-fitting clothing made of cotton or natural fibers.

You should be aware that Monistat-1 can harm a condom or a diaphragm. Therefore, it is strongly advised to use a different method of birth control when using Monistat-1.

Does Monistat-1 interact with any medication?

Warfarin and Monistat 1 can interact. Antibiotics, corticosteroids (like prednisone), and immune system suppressants are additional products that could raise the risk of vaginal yeast infections (such as cyclosporine and methotrexate).

Consult your doctor if your symptoms don’t disappear in a week or two. Another therapy might be required since the medication you received may not have been potent enough to eradicate the infection.

Additionally, you should visit your doctor if the infection reappears within two months. A hidden medical problem could occur if you get more than one yeast infection in a calendar year.