How Long Does NBA Halftime Last?

How long is NBA halftime? The NBA and NCAA women’s and men’s basketball leagues have 15-minute halftime breaks. In high school, halftime lasts between 10 and 15 minutes.

The National Basketball Association is the governing body for professional basketball in the United States. Each team plays 82 games during the season. 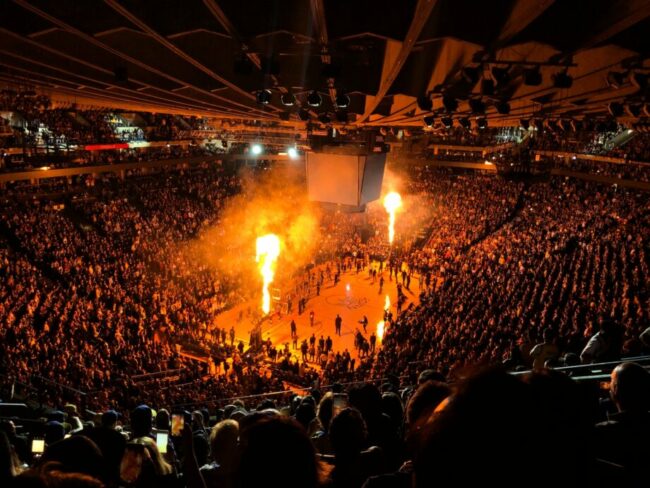 How long does an NBA halftime last?

In the NBA, halftime lasts 15 minutes. While players rest up for the second half, coaches evaluate their game plans and relay alterations to the squad. Before the second half, players frequently use the last few minutes of halftime to warm up. Each level of basketball has special halftime.

Teams utilize this time to strategize and fine-tune their gameplay for the second half of the game. It provides both sides a chance to recover before returning to the court. The coaches will meet with the squad to discuss what went well and what did not.

They will also look through plays and discuss their offensive and defensive strategy. The conversation may also include which players on the other side should be given greater attention.

This might be because the player has scored many points against them or because the player’s defense is causing problems for the team. Normally, teams would return to the floor a few minutes before the 15-minute halftime break to take practice shots at the hoop.

This might be termed a warm-up period for the players for them to be ready to play again.

Why is the NBA halftime so long?

Halftime is set up in this manner so that everyone has a chance to rest and make modifications.

It is more equitable for both teams engaged.

It is also used since players are not expected to perform the sport continuously. Staying in the game for a full forty-eight minutes without respite is hazardous to one’s health.

Coaches can make modifications throughout the game by calling timeouts, although they are only seconds long, with the longest timeout being sixty seconds (one minute). Halftime is also when the teams switch which side of the field they will begin.

The field orientation was changed so that one team did not have the edge over the other. This may be noticeable in situations when teams appear to shoot better from one side than the other.

This is also the moment for analysts and broadcasters to weigh what each side should do to win the game. Halftime also allows supporters and onlookers to rest, use the restroom, stretch their legs, and get food and drink.

The value of half-time conversations

Halftime is commonly forgotten in officiating due to the concentration beforehand and postgame. Despite its brief duration, a halftime is a major event for officials.

During halftime, officials are permitted to talk alone in a locker room to discuss the events of the first half. The officials can also use that time to regroup and focus on enhancing the second half of the game.

What was the standout plays in the first half?

The teams will examine the various sorts of violations and how they may affect team place throughout the first half. Furthermore, they will understand their defenses during the game and how they may use their speed.

Halftime is a good time to discuss plays, but it is not the moment for dispute. Any talk that does not aid the team’s development should be avoided. It’s preferable to wait until after the game.

Who is deserving of special attention in the second half?

If a team member has discussed anything with a coach or other players but hasn’t been able to educate the rest of the team, now is the time to start.

If a particularly competitive match-up exists between players, the team must be aware of it throughout the second half. Discuss the players’ and coaches’ demeanors, how they could change, and how the club would deal with such a situation.

What surprises may the second half have in store?

If the game is tight and the participants anticipate a barnburner, ensure everyone stays focused and follows the overtime regulations. Basketball games with a larger margin of victory need more work and focus.

The squad should discuss what to expect in the second half and ensure everyone is prepared. If a team can handle those concerns appropriately during their halftime discussion, their chances of winning the game soar.

Hopefully, the team completed a thorough pregame analysis and will give the necessary postgame insight. On the other hand, a lengthy halftime talk is appropriate for a team to address when it counts most during the game.

In the NBA, how long is the time between periods?

The NBA game is broken into four quarters, with shorter intervals between the first and second quarters and the third and fourth quarters. These quarter-breaks last 130 seconds. This is scarcely enough time for fans to use the restroom.

This brief intermission provides participants with just enough time to gather their breath. This period is crucial for television advertising on the business side.

What is the length of the NBA game timeout?

In the NBA, timeouts are in charge of allowing players to unwind. Coaches use timeouts to substitute, call a play, or momentarily halt the game. Each NBA club has seven timeouts, and each quarterly term contains two mandatory timeouts.

If neither team takes a timeout before 6:59 p.m., the Official Scorer must take the ball at the first dead ball and pass it to the host team. If no timeouts arise before 2:59 minutes, the Official Scorer will take them and allocate them to the team that has not previously been charged.

When a team’s players or coach request a timeout, the ball must be dead or in possession of the person making the request. A request submitted at any other time will be denied. During the Overtime period, each team will get two timeouts.

What distinguishes timeouts from halftime?

Aside from a 15-minute halftime break, each team has seven timeouts throughout the game. Timeouts are set at 1 minute and 15 seconds. The teams can use this to rearrange things amid the quarter.

While halftime allows players to relax and recover, timeouts are more focused on strategy. The major aim of timeouts is to allow coaches time to make strategic modifications. A timeout can be called by any player or the team’s head coach. However, the request is only granted if the ball is dead.

Dr. James Naismith’s original basketball regulations from 1891 stipulate that the game shall be played in “two fifteen-minute halves, with five minutes respite between.”

The basketball game is divided into four 10-minute quarters. Teams alternate quarters by playing one way for two quarters and the other way for the next two.

There is a two-minute break between the first and second periods and between the third and fourth periods, with a 15-minute halftime break.

During the first half, coaches can call two one-minute timeouts at any time and three timeouts in the second half.

When the referee blows his whistle, the clock stops. It stops when free throws are taken and restarts when the ball hits a player on the floor, giving you a complete 40 minutes of basketball action.

There are also time constraints for a player in control of the basketball, which is governed by five primary rules:

After gaining possession of the ball, a team has 24 seconds to shoot. If they fail to accomplish so, possession is given to the opposing side.

When a player gets possession of the ball in their half, or ‘backcourt,’ they have 8 seconds to advance it over the midway line into the ‘frontcourt.’ Otherwise, they will be deprived of their possession.

A player who is heavily defended with the ball has 5 seconds to pass or advance the ball toward the hoop. The opposing side gains control of the ball when a foul is called.

A player can only spend 3 seconds in the other team’s rectangular ‘key’ region under the basket. A foul will be called if the player does not depart within those three seconds.

After reading this post, we hope you will better understand how long the NBA halftime is and whether it matters. During this critical interval, the basketball teams and officials will take a brief pause to analyze the first half and devise a new plan.