How Long Tsunami After Earthquake And Why?


What exactly is a Tsunami?

Tsunamis are sometimes referred to as “tidal waves,” even though they have nothing to do with tides. The translation of the Japanese term tsunami is a little more accurate: “harbor wave.” 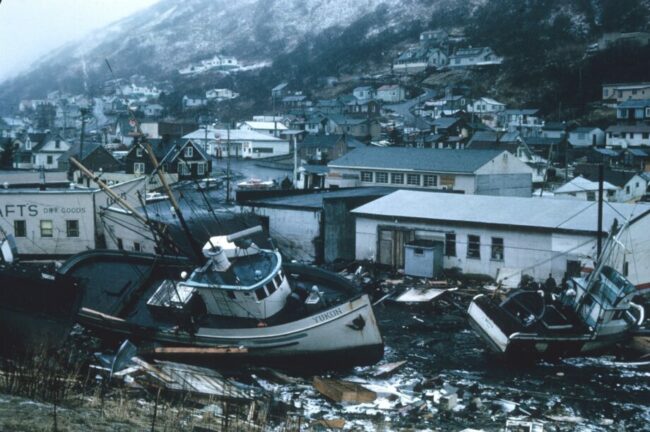 The term relates to how enormous waves may flood and overrun a whole port, as they have done several times throughout Japan’s history. Indeed, more tsunamis have hit Japan’s islands than any other country.

Many scientists refer to tsunamis as seismic waves because they are frequently caused by seismic, or earthquake, activity on the ocean floor. Tsunamis can also occur due to a large and rapid underwater action, such as a landslide or volcanic eruption.

Tsunamis may happen anywhere in the ocean. They will most likely occur around the Pacific Ocean’s “Ring of Fire.” This “ring,” which circles most of the Pacific, denotes a region of high instability in the Earth’s crust.

Earthquakes cause tsunamis in a variety of ways.

Large, shallow earthquakes with an epicenter or fault line close to or on the ocean bottom produce by far the most damaging tsunamis. These are most common in areas of the earth where tectonic subduction occurs along tectonic plate borders.

The collision of tectonic plates causes such places’ strong seismicity. When tectonic plates collide, enormous earthquakes occur, which tilt, offset, or displace large portions of the ocean bottom ranging from a few kilometers to 1,000 kilometers or more.

The large-scale vertical displacements upset the ocean’s surface, displace water, and cause catastrophic tsunami waves. The waves can travel considerable distances from the originating location, wreaking havoc along the way.

The earth’s crust is divided into several parts known as tectonic plates. These tectonic plates continually move and grind against one other when they collide.

When the pressure in the fault zone gets too high to hold together, the rocks along the fault break apart at a rapid pace. When two plates on the opposite side of a fault split to relieve built-up pressure, the energy released reaches the surface and generates an earthquake.

When an earthquake happens offshore into the water, the tsunami takes at least a few hours to reach land.

When an earthquake happens nearby, the tsunami might happen anywhere between 5 and 30 minutes following the earthquake.

What causes some earthquakes to generate tsunamis?

Most earthquakes occur around the margins of tectonic plates, which are referred to as plate boundaries. The earthquake in Mexico happened when the Cocos plate collided with the North American plate.

The earthquake pushed up around 200 by 50 kilometers, moving the water on top of it.

The sea bottom was barely raised a few meters, but this was enough to displace many cubic kilometers of water and send a succession of waves outwards from the site of the earthquake.

Tsunamis occur 75 percent of the time along subduction zones, including some of the greatest in recent history, such as the 2004 Indian Ocean (Boxing Day) tsunami, which killed over 250,000 people.

The others are created by underwater landslides, volcanic eruptions, and (in rare cases) meteorite strikes.

What is the magnitude of the earthquake that creates the tsunami?

Take note of the following basic principles, which are based on historical observations and follow the protocols of the Pacific Tsunami Warning Center.

Tsunamis are extremely unlikely to be triggered by earthquakes of this size.

Earthquakes of this magnitude seldom create tsunamis. Small sea level fluctuations, however, may be noticed in the neighborhood of the epicenter.

Tsunamis with the potential to cause damage or deaths are uncommon in this size range, but they have happened due to secondary events such as landslides or underwater slumps.

Earthquakes of this magnitude have the potential to generate catastrophic tsunamis, particularly near the epicenter. Small sea level variations may be noticed at larger distances. Tsunamis capable of causing harm across long distances are uncommon in the magnitude range.

Magnitudes of 7.9 and higher

Local tsunamis can be destructive near the epicenter, and large sea level fluctuations and damage can occur in a wider region. It should be noted that an aftershock of magnitude 7.5 or larger is possible with a magnitude 9.0 earthquake.

How Long Does a Tsunami Last After an Earthquake?

Why Does It Take So Long For A Tsunami To Hit After An Earthquake?

Tsunamis triggered by earthquakes are regarded to be the most powerful tsunamis. Tsunamis are most deadly when shallow, yet massive earthquakes cause them. These earthquakes generally have their fault line or epicenter on the ocean floor or nearby.

These sorts of earthquakes are most common in areas where there is tectonic subduction. As a result, tectonic plates often clash. When they collide, they slide past one other with such power that large sections of the ocean bottom might be moved or slanted.

This vertical movement in the water can significantly impact the ocean column, resulting in a tsunami.

Because these waves contain so much energy and force, they can travel at great speeds and large distances.

Out at sea, a tsunami may reach speeds of up to 500 miles per hour. They will not be very tall at this time.

However, as they approach shallow water along coastal shorelines, their speed drops to 20-30 miles per hour. Their height, on the other hand, may skyrocket, and they get more energized as their currents become stronger.

This is why tsunamis triggered by offshore earthquakes take longer to reach land, but tsunamis caused by local earthquakes arrive in less than 5 minutes.

Tsunamis are particularly devastating due to their far larger volume and speed than regular waves. They can transport automobiles, drag people in, and demolish structures, among other things.

As a result, it is always wise to heed tsunami warnings and leave before it is too late.

How can we know when a tsunami is approaching?

The tsunami warning system continuously analyzes the seismic networks to respond quickly when an incident is identified.

Many nations also have 24-hour national tsunami warning centers. Following that, each country and local government region determines how to respond to the information and whether to evacuate coastal areas in the event of a tsunami.

Following an earthquake, a warning message is instantly transmitted to national and local government agencies and disaster management organizations.

During the following few hours, tsunami warning center personnel will monitor the global network of sea level stations, including offshore tsunami meter buoys, to determine whether a tsunami wave was created.

The magnitude and location of the earthquake are estimated hourly or as further information becomes available, and this updated information is relayed to authorities and the media.

As the first waves hit the coastline, the data is being evaluated to offer improved wave height predictions for nations further away from the earthquake’s epicenter.

Local reactions vary by nation, but warning messages are often aired through media platforms such as television, radio, and the internet. Many individuals will get information from social media as well.

Some nations broadcast notifications straight to mobile phones, and prominent beaches in tourist regions may have tsunami sirens.

If the earthquake occurs at sea, you have anywhere from 5 to 30 minutes before the tsunami reaches the coast.