Is it Possible for Vegetable Oil to Go Bad? How to Tell

Is it possible for vegetable oil to become bad? If you use it infrequently, you may be unsure what to do with the oil sitting in your pantry for a long time and whether it can be utilized.


If you cook, you presumably use vegetable oils regularly and are familiar with how to use them. This article will supply you with all of the necessary information. 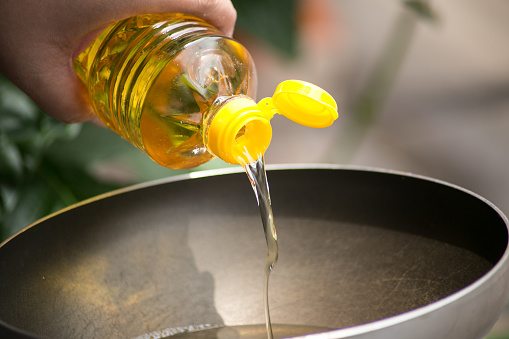 How long does it take for vegetable oil to go bad?

Vegetable oils, such as soybean oil, sunflower oil, or peanut oil, come in various forms. Their shelf life, on the other hand, is very similar. If your vegetable oil is unopened and properly stored, it should last at least two years, if not much longer. The oil in the bottle should be good for at least a year after you open it.

If you store vegetable oil correctly, you can keep it from going bad for much longer.

However, there is something else to consider: the flavor of oil changes over time, and in many situations, you will not be pleased with those changes, especially if you want to use the oil in a salad. It goes rancid.

A word or two about keeping vegetable oils. First and foremost, keep in mind that vegetable oil should be stored in a cold, dry place. It’s common to keep it in the pantry, and it’s a good option.

However, storing vegetable oil in the refrigerator is not a good idea. Keeping the bottle out of direct sunlight is also a good idea, so storing it in a pantry cupboard is the best option.

Finally, once you’ve opened the bottle, ensure it’s properly sealed while not using the oil. This will keep pollutants and air from entering the bottle. When oil is exposed to fresh air regularly, the oxidation process begins, causing the oil to deteriorate faster.

What the Labeling Indicates

Is vegetable oil perishable? How can you know if your veggie oil is rotten or rancid?

Vegetable oil does not go rancid soon if properly stored. However, the oil might deteriorate over time.

Here are some pointers to help you determine if your vegetable oil has gone bad:

How Can You Tell If Your Vegetable Oil Is Rancid?

Rancid vegetable oil has a foul odor or taste. Different people describe the sensations in different ways, but some of the most widely used words are as follows:

A paint-like, sour, harsh, detergent-like odor, a sour, harsh, soap-like flavor
If one of these sounds like how you’d describe your cooking oil, it’s probably rancid.

Remember that while using rancid oil is unlikely to cause immediate harm (such as a stomachache or being ill), it may have long-term implications. Toss it out.

Is it possible for vegetable oil to go bad after use?

Cooking with vegetable oil does not cause it to go bad, but using the same oil repeatedly is usually not a smart idea.

The problem is that the rancidification process accelerates when oil is exposed to oxygen, light, and heat. And when it’s used in cooking, it’s at the very least subjected to high temperatures and can rapidly absorb oxygen.

That means a 30-minute cooking session may have the same effect on the oil as a few months of storage, if not more.

However, if you wish to reuse your cooking oil, keep the following in mind:

Rancid vegetable oil does not usually make you sick, at least not right away. However, stinky items may include radicals that, over time, raise the risk of cancer and heart disease. Furthermore, rancid vegetable oils can cause botulism, a dangerous sickness characterized by muscle weakness, postural hypertension, and constipation.

What Is the Best Way to Store Cooking Oil?

Before we get into the specifics, let’s go over some general information on vegetable oil.

In the United States, vegetable oil products are predominantly soybean or a blend of several oils.

Oil, as you are surely aware, is prone to becoming rancid. Proper storage conditions are critical for slowing the oxidation that leads to rancidification. It means preventing oil from being exposed to air, light, or moisture.

A cold, dry, dark environment away from heat and sunshine is ideal for oil storage. As a result, they are nowhere near the oven, stove, window, or microwave. Your pantry is highly recommended. However, a kitchen closet or cabinet would suffice if you use oil frequently.

Always carefully close the container after opening it. If the cap is damaged, pour the oil into a different bottle or jar.

Is it necessary to refrigerate vegetable oil after it has been opened?

Vegetable oil, in general, is a shelf-stable substance that does not require refrigeration. Refrigeration is not suggested for certain types of oil, such as coconut oil. Cold temperatures cause the oil to solidify, making it more difficult to use (or at least takes more time).

Refrigeration is recommended for several other oils, such as sesame oil, to keep it fresher for longer. It may become hazy, but this does not affect the flavor or taste.

As can be seen, the answer to the main question, “Can vegetable oil go bad?” is yes. However, going bad isn’t a concern in most circumstances because vegetable oil may be stored correctly for much longer than its “Best by” date.

The most serious issue is that oil deteriorates with time, causing its taste to change and to turn rancid. As a result, you’ll probably decide to toss it out a few months after the “Use by” date.