Pure Vanilla Vs. Imitation Vanilla Extract: What Is The Difference Between Them

Home  »  Food & Drinks   »   Pure Vanilla Vs. Imitation Vanilla Extract: What Is The Difference Between Them

Vanilla extract is a flavoring that is derived from the bean of an orchid plant. There are two types of vanilla extract, pure and imitation. 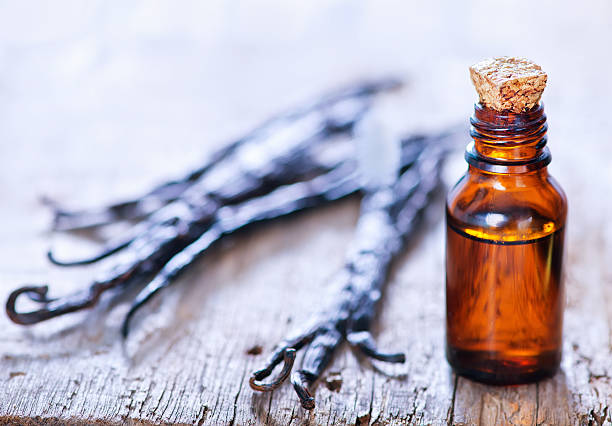 Here’s our in-depth guide if you want to know the full difference between these two.

Not Every Vanilla Bean Is Created Equal

Vanilla is derived from a tropical orchid that is mostly grown in Central America, the South Pacific, and Africa. Madagascar accounts for more than 80% of all vanilla production.

Vanilla orchid grows on a vine, and each vine need a tree to thrive. The vine normally blossoms after 2-3 years, and the flower only blooms for one day. Vanilla flower is manually pollinated on the day it blossoms. So you probably see why pure vanilla is so expensive.

Each bloom produces one pod, which matures in 7-9 months. Following that, the beans go through many curing procedures, which may take up to a year.

The vanilla beans are washed and soaked in an alcohol and water solution throughout the extraction procedure. Flavors are extracted from the seeds and infused into the alcohol.

Consider the nutritional value of vanilla extract per 100 g:

Vanilla extract is mostly composed of water (65%), alcohol (33%), and carbohydrates (2%). Because it is intended to be used as a spice, 1 tsp or a few drops should enough.

What Exactly Is Vanillin?

Vanillin is the name of an organic component that occurs naturally and adds to the taste of vanilla beans. When the name vanillin is used, it usually refers to the synthetic form of the taste component. By creating the vanillin chemical in a lab, manufacturers realized they could make a fake imitation of vanilla taste.

What is Vanilla Flavoring

Vanilla flavoring is often made out of a mixture of fake vanilla and genuine vanilla extract. It’s inexpensive, but that’s about all it has going for it.

What Is the Difference Between Pure Vanilla and Imitation Vanilla?

The imitation form is a weak solution of vanillin, either naturally generated or produced in a lab. Imitation vanilla extract loses flavor and has a much simpler flavor than genuine vanilla extract.

Let’s have a look at the nutritional facts for imitation vanilla extract:

As you can see, many minerals are lost, and carbohydrate and sodium levels are substantially lower than in the pure form. Overall, pure vanilla adds a deeper flavor to baked products while leaving no chemical aftertaste. The pure version is much more costly, but we believe it is well worth it.

What Is the Difference Between Vanilla Extract and Imitation?

It is quite simple to distinguish genuine vanilla extract from fake vanilla extract. Labels may be read in the baking sector. The word “Pure” will always appear on the label of the genuine article. Another thing to look for is the price, since pure extract is still rather expensive.

The primary distinction between extract and its imitation is the method through which both goods are manufactured. Vanilla beans are used to make a brown-colored pure extract. The brown hue is caused by essential oils. The pure extract contains hundreds of flavor components that contribute to its rich flavor; vanillin is one of the most important and fundamental ones.

Imitation contains just one important taste ingredient, vanillin, and none of the other chemicals that distinguish pure extract from imitation. As a result, taste mimicry isn’t all that rich. Because vanillin is a synthetic chemical created in a laboratory, fake vanilla tastes inferior to the genuine thing.

Vanilla beans are pricey because their plants are fussy and difficult to cultivate; hence, the genuine thing is expensive. For daily baking, not everyone can afford the genuine thing. As a result, a fake vanilla extract containing the synthetic ingredient vanillin is widely utilized.

The major difference is the price, so if you purchase an extract for less than $5, it’s a fake since the genuine thing costs a lot more.

The FDA has extremely precise regulations for vanilla extract.

Since 1977, the FDA has required that a company’s product contain at least 35% ethyl alcohol in order to be labeled as “vanilla extract.” That is to say, while drinking pure vanilla extract can get you very intoxicated, it can also get you very, very sick. And it’s not only because of the booze.

According to the FDA’s standards, pure vanilla extract is also quite highly flavored. That’s significant because it means a baker just needs a small amount to go a long way. It also implies you should never consume pure vanilla extract, but the FDA presumably won’t feel the need to clarify that.

Does imitation vanilla taste the same as pure vanilla?

Synthetic vanillin, one of the taste components that gives genuine vanilla its flavor, is used to make imitation vanilla. Artificial vanilla lacks the rich, nuanced tastes of natural vanilla since it only includes one flavor ingredient. However, there are certain advantages to using fake vanilla in the kitchen.

The good news is that you won’t be able to detect the difference between the two kinds in a dessert where the predominant taste isn’t vanilla, such as chocolate, spice cakes, or cookies with plenty of mix-ins.

In the United States, vanilla extract is subject to a Standard of Identity. A gallon of Pure Vanilla Extract must include 13.35 percent vanilla bean extractives (10 ounces moisture-free solids), 35 percent alcohol, and the rest distilled water.

Sugar, corn syrup, caramel color, and any other additions that pure vanilla may include are not mentioned in the Standard of Identity.

Some firms include one or more of these additives on their labels, but the majority do not — despite the fact that their pure vanilla contains it. The same holds true for alcohol. The most usually used alcohol in vanilla is a grain alcohol, however, sugarcane alcohol is also utilized.

Sugar or corn syrup is often added to conceal the harsh notes of alcohol or to improve the smell and taste of the extract if the quality of the beans used was poor.

If you have a gluten or sugar intolerance, verify with the firm whose vanilla you bought. Rain’s Choice vanilla is created from sugar cane alcohol and does not include any added sweeteners or chemicals. As a consequence, our vanilla extract is devoid of gluten, sugar, and genetically modified organisms.

What Is Imitation Vanilla Made From?

Only around 1% of the vanilla extracts or essences marketed in Mexico, the Caribbean, and the rest of the Americas are pure vanilla extract or taste. They are manufactured from synthetic vanillin, and some include 2% alcohol as a preservative.

They often include sugar and other substances, some of which may be carcinogenic in the United States. Many nations in the Americas have no labeling regulations and those that do have them do not enforce them.

This information should help you make an educated choice on which liquid vanilla is best for you.