Rum Vs Whiskey: What is the Difference?

Rum and whiskey are two of the world’s most popular spirits. Rum versus whiskey is another hotly debated topic since both beverages have their supporters.


What’s the distinction between rum and whiskey? 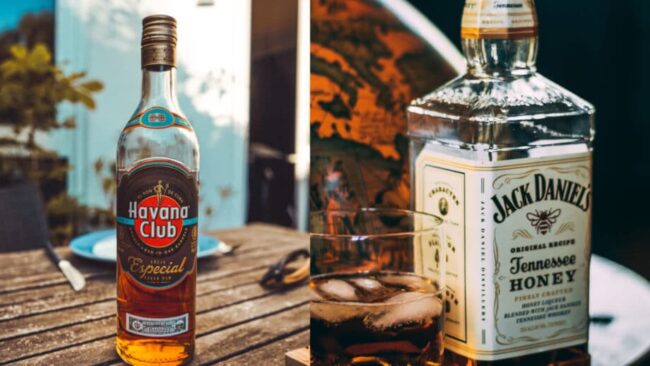 The novice can be difficult to recognize since they might look, smell, and even taste identical.

What’s the difference between rum and whiskey? The primary distinction between whiskey and rum is in their basic components.

Whiskey is made from fermented and distilled grain mash juices. It’s similar to beer, but without the hops and distilled.

Rum is made from distilled sugar cane extracts and byproducts. It’s less complicated and has fewer components. It is also sweeter than whiskey because of the addition of sugar cane.

Continue reading to discover more about whiskey versus rum and the similarities and distinctions between these two popular beverages.

What Is the Difference Between Rum and Whiskey?

One of the primary distinctions between rum and whiskey is the provenance of their raw materials or components.

Rum is a straightforward spirit. Sugar cane and molasses are the two main raw materials used in the manufacturing of rum.

There is more to whisky than meets the eye. Certain grains are utilized in the production of whiskey. Barley, corn, wheat, and rye are among them. In most circumstances, a mash bill is made up of many grains.

To create the final spirit or alcoholic beverage, both rum and whiskey go through fermentation and distillation operations. Following these two steps, the finished spirit is kept in a wine barrel or cask. This is where the spirits are held or ‘aged’ to get the desired distinct taste and fragrance.

Several rum and whiskey products are available, each with its distinct flavor and scent. On the other hand, rum is often the sweeter of the two spirits, with a rich and peppery flavor.

Whiskey has richer aromatics and preserves oak tastes from its barrel aging. In terms of flavor profile, bourbon and run are the most similar, yet most consumers find them fairly distinct.

The Amount of Alcohol

The strength of alcoholic beverages is expressed in numbers by their ‘alcohol by volume’ and proof percentages. The stronger the alcoholic drink becomes as the number grows. Another way to put it is that drinking a high-proof and high ABV alcoholic drink takes fewer drinks to get intoxicated.

Both rum and whiskey provide health advantages when used in moderation.

The advantages of rum differ from those of whiskey. Drinking little quantities of rum can help to strengthen the mineral density of your bones. As a result, modest rum consumption will alleviate arthritic symptoms.

What about bourbon? Whiskey generates ellagic acid while it matures in oak barrels, a nutritious ingredient that can help manage your body’s glucose levels.

The aging process is critical for these spirits since it imparts smells, power, and distinct nuances. This process is expedited in the Caribbean.

The evaporation rate is greater here, and rum matures three times quicker than whisky. To put this in context, after 12 years of age in the Caribbean area, a rum barrel would only contain 40% of its initial capacity.

Rum is often thought to be bold, rich, and warm. By day, he wears a colorful flowery shirt, but by night, he’s ready to change into something a bit more sophisticated.

Whiskey, on the other hand, is often described as smooth, consistent, and fragrant. You know, the sort of uncle that dresses up for breakfast, lunch, and supper.

Whiskey’s taste nuances are strongly influenced by the barrels in which it is matured. If it hasn’t been clear by now, barrels are essential tools for both whiskey and rum.

Furthermore, in terms of complexity and taste, extremely premium rums may be very close to whiskey. On the other hand, rum is recognized to have significantly more taste nuances.

The table below summarizes the distinctions between these two beverages:

What Exactly Is Rum?

Rum is a distilled liquor from sugarcane byproducts such as juice or molasses. What is the distinction between rum and whiskey? Rum is a liquor made from sugar cane, whereas whiskey is made from fermented grain mash.

There is no definitive history of rum. However, there are several suggestions as to where it was initially created. Today’s rum is largely produced in Latin America and the Caribbean islands, where plantation enslaved people are thought to have discovered that molasses could be fermented into alcohol.

Like most alcoholic drinks, rum is produced by fermentation, distillation, and natural aging. The flavor of rum varies depending on where it is produced. Rum’s color and intensity differ from one brand to the next.

Water and yeast are added to the sugarcane waste during the fermentation process to break down the sugars. The yeast is responsible for the fragrance and flavor of diverse rums.

To get its color, rum must be matured for at least one year in a hardwood cask after distillation. Some commercial firms that make colorless rum age it in stainless steel tanks.

The flavor of a certain type of rum is also affected by the raw material utilized. Different rum brands have diverse tastes, flavors, and alcoholic content. The following are the many types and categories of rum:

The hue of this rum is dark. This sort of rum comes in a variety of dark hues. Black, brown, and red are among the dark colors. Black rums are those that have been matured for a long time in burned oak wine barrels. The resulting alcohol is often sweeter and stronger than other rums.

Light-colored rum, often known as white rum, is a variety of rum commonly mixed with other beverages.

This rum is made solely from the best-grade sugarcane and byproducts. It has also been carefully aged. Premium rums are also expensive for these reasons. It also has the finest scent and flavor of any rum grade.

Typically, this rum is matured in white oak barrels. It has an amber hue and a stronger taste than light rum.

This is the rum to buy if you prefer fruit-flavored rum. Fruit flavors incorporated in this rum include coconut, banana, and citrus, to name a few.

The hue of this rum is dark. It is flavored with spices such as pepper, aniseed, and cinnamon.

In 1650, the first reference to rum in history was discovered in excellently preserved government papers from the province of Barbados. The term “rum” was not referenced again until 1667, when the Jamaican Governor issued a proclamation.

Because sugar cane agriculture was well established then, the world’s first rums were being distilled in Venezuela.

How is Rum Made?

The contemporary rum production technique necessitates the addition of yeast to molasses before fermentation in a controlled environment, including yeast aids in achieving rum’s good flavor and taste. The next step is liquid distillation, which achieves the necessary alcoholic content.

During fermentation, the sugarcane waste is mixed with yeast and water. This combination will break down the sugars in the molasses. The yeast alters the flavor and fragrance of various rums.

After distillation, the rum is ready for storage in hardwood barrels for roughly a year to develop a distinctive golden hue. Colorless rums are stored in stainless steel wine barrels.

What exactly is whiskey?

Whisky is a distilled liquor manufactured from fermented barley mash that may contain the following ingredients:

Whiskey is thought to have originated with the Greeks in the third century when spirits were distilled to manufacture scents. Whiskey was initially made as a drinking alcohol and medication in Italy in the thirteenth century. Soon after, it became a hugely popular drink in Scotland.

Whiskey is classified into two types: grain whiskey and malt whiskey. Malting is the process by which grain is germinated before being fermented.

Whiskey is distilled after fermentation and then aged in a wooden barrel to build strength. Whiskey does not continue to mature once it has been bottled. Whiskey aged in charred hardwood barrels takes on amber or golden-brown hue.

The following are the most frequent varieties of whiskey:

Whiskeys can also be divided into the following categories:

This whiskey is a blend of grain and malt whiskeys with flavorings such as caramel, colors, and neutral spirits added.

This whiskey is kept and matured in a single barrel. The cask number is printed on the bottle’s label.

This whiskey was made from a single variety of grain and by a single distillery. Its starting ingredient is a mash containing only one type of malted barley.

This whiskey is a blend of numerous whiskeys from various distilleries.

The flavor and fragrance of whiskey are determined by where it was produced and how it was matured. Whiskey’s diverse flavor is mostly determined by the sort of raw materials utilized and the quality of the product.

Old uncle whiskey has a foot in both Ireland and Scotland. According to historians, the earliest official reference to whiskey dates back to 1494 in a Scottish document. On the other hand, Ireland is adamant that whiskey began on their territory.

This is because The Bushmills was the first documented distillery in the world, boldly establishing itself in the country of saints and academics in 1608.

As you would expect, the Scotland vs. Ireland dispute is significantly less cordial than the whiskey rum/rum whiskey discussion, which we’ll leave to the experts.

How Whiskey is Produced

Whiskey is often made from a fermented grain mash containing wheat, rye (or malted rye), maize, and barley (or malted barley). It is divided into two types: malt whiskey and grain whiskey. Malting is the process through which grain is allowed to germinate before being fermented.

After the mash bill has fermented, the next step is distillation. The liquid is then stored and aged in wooden barrels. The spirit gains power, color, unique taste, scent, and flavor as it ages. Whiskey aged in charred oak casks takes on a golden-brown or amber hue.

Where do Whiskey and Rum Age?

We discussed the contrasts between continental and tropical maturation in another post. It has to be discussed while comparing Whiskey with Rum. The degree of contact between the Spirit and the wood is controlled by the barrel’s environment and how the liquid heats up and cools down.

Compared to colder regions such as the central United States or Scotland, the interaction is accelerated in tropical climates such as Florida, the Caribbean, and Central and South America.

It is critical to understand where a Spirit was matured to regulate your expectations of the product and read the age statement if one exists.

Let’s compare the health advantages of whiskey and rum. Both rum and whiskey, when used in moderation, may be beneficial to one’s health. Here are some of the advantages that these spirits provide.

To obtain the health advantages of these spirits, they should be used in moderation. The maximum number of servings at any given time should be two.

The primary distinction between whiskey and rum is their basic components.

Whiskey is made from fermented grain mash juices, whereas rum is made from distilled sugar cane juice and byproducts. Sugar is derived from sugar cane. As a result, most rums are sweeter than whiskeys. Some grains are sweet, yet even the sweetest grain cannot match sugar’s sweetness.

Personal preference determines the beverage you like. Now that you understand the distinctions between the two, you’ll understand why you choose one over the other.