What Is the Difference Between Mussels and Clams?

Home  »  Food & Drinks   »   What Is the Difference Between Mussels and Clams?

Many individuals, like myself, are unsure about the distinction between mussels and clams. I know they are distinct, but other than the taste, I am unsure what distinguishes them.


Here’s all you need to know about mussels vs. clams: 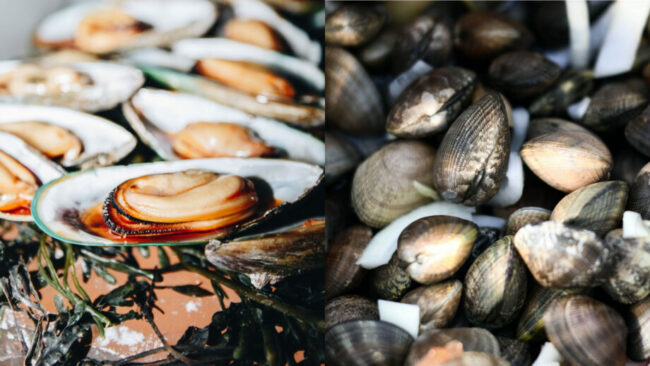 The Primary Distinctions Between Mussels and Clams

What exactly are Mussels?

Mussel is a popular term for bivalve mollusk families. Mussels and shellfish are edible, while others are not. They are regarded as seafood and are adored by many people.

Mussels have long and thin forms, usually blue, black, or green. They have a chewy yet soft and sensitive feel and a natural saltwater flavor rather than being too salty like clams.

Mussels are usually prepared and are popular in curry curries. They are frequently boiled or cooked with wine. The edible bivalve is a member of the marine family Mytilidae and may be found in both freshwater and saltwater.

Mussels are connected by a thread structure known as a byssal thread, which aids in forming a substrate.

Mussels are cheap since they have no input, which means they don’t require any food or fertilizers.

A black substance may be detected in a mussel at times; this black stuff is most likely plankton, a type of food that has been caught in the mussel’s digestive tract. There are several ways to prepare mussels. Thai curry is a well-known dish that incorporates mussels.

Mussels are abundant in protein and iron, and they have a high zinc concentration. They are low in calories and fat and include a variety of nutrients and minerals, as well as the appealing taste of mussels.

Mussels are a good source of nutrients, but consuming too many of them might be harmful. It has been discovered that mussels and the mollusk family can occasionally induce poisoning in the human body, resulting in diarrhea, vomiting, neurotoxic consequences, and so on.

Depending on where you reside and the season, mussels come in various varieties. Here are some of the most prevalent ones.

These are often available in the summer and fall. Their shells are fairly broad, and their flesh is very fat.

These are available during the winter and spring seasons. While they are much smaller in size than their Mediterranean counterparts, the rich richness of their flavor more than compensates for this deficit.

These have huge shells with a green hue around the edges. They are widely grown in New Zealand and other regions of Asia.

What exactly are Clams?

Clam is a popular name for a group of bivalve mollusks.

Some of them are edible, while others are not. They are commonly considered seafood since they hide in sediments and can only be detected in salty water.

Clams are oval, with round and stouter bodies. They are often brown, beige, or white. When compared to mussels, they are larger, weighing around 500 pounds and measuring 4.25 feet in length. One of its species is consumed when enjoying clam chowder.

Clams may be eaten raw or cooked and have a salty flavor, unlike mussels. They have a chewy texture but are a little rubbery, with a salty flavor that is quite delightful. They are not discovered linked to anything like muscles but rather buried in sediments.

Clams are more expensive than mussels because they are more difficult to produce. Clams must be discovered in the sand and then cultivated to mature; food is also given.

Clams are typically found on the coast; they are composed of seafood since they cannot survive without water for more than 2 or 3 days. When frying a clam, there is a hole through which they may be eaten; nevertheless, opening that area does not instantaneously kill them.

Clams have an aperture that expands while cooking. Clams that do not open are either dead or full of muck. Clams should be eaten cooked since they are toxic to the human body if eaten uncooked or undercooked.

Clams are a low-fat protein source that is strong in zinc and iron. They are also helpful for immunity since they include a variety of minerals and vitamins. They also include omega-3 fatty acids, which are high in protein.

There are around 150 varieties of edible clams, but only a few are commercially accessible. Here are some typical ones you’ll find at your local farmers’ market.

These are quite popular in the Northwest Pacific and Asia and are pronounced “gooey-ducks.” They’re chewy, almost crunchy, and have a great salty flavor. Pacific geoducks and Atlantic geoducks are the two most frequent types of geoduck clams.

With shells ranging in length from seven to nine inches and siphons reaching four feet in length, the two are practically indistinguishable. This makes them the world’s biggest burrowing clams.

There are two primary types of quahogs. Northern quahogs reside in the Atlantic coast’s intertidal zones between the Gulf of Mexico and the Gulf of St. Lawrence. These feature shells that range in size from 1.5 to 3.5 inches.

Southern quahogs can also be found in the intertidal zones between the West Indies and the Chesapeake Bay. These can reach a length of six inches.

Raw, grilled, filled, or broiled hard clams are all options.

These clams, sometimes known as ocean quahogs, are found in the North Atlantic area, mainly around Maine. Their shells are round and dark brown or black.

They mature after six years and can live for up to 100 years. They have a significantly stronger flavor than their hard clam siblings and are ideal for pasta preparations.

These mollusks, sometimes known as steamer clams on the West Coast, are a species of tiny, hard-shell clam found in the Pacific Ocean. Compared to other clam kinds, they have a sweeter flavor and are less salty.

You may eat them raw, steamed, or in various pasta preparations.

The shells of these creatures are fragile and gape open. The shells of Pacific razor clams are oval and contain long, projecting siphons. They’re delicious and soft, and you can eat them uncooked.

On the other hand, Atlantic razors have a softer flavor than Pacific razors, with shells that may be up to eight inches long. Grilled or steamed is the finest way to prepare them.

These feature thin, fragile, grayish-white oval-shaped shells with long siphons. They may grow six inches long and are finest eaten steamed or deep-fried with butter. The bigger clams are ideal for soup.

Surf clams account for approximately 33% of all clams collected in the United States. They prefer deep water and may be found mostly off the coast of New Jersey. They may grow up to six inches long and are ideal for clam chowder.

These mollusks, often known as butter clams, are most recognized for their melt-in-your-mouth texture. There are two varieties of Washington clams that you may encounter.

There’s the Northern butter clam, which lives in the seas between San Francisco and Alaska. It has a diameter of up to four inches.

The bigger Southern butter clam may grow seven inches long and have purple lines within its shell. These are regularly caught between Northern California’s Humboldt Bay and Mexico’s Baja California.

Many people compare mussels to “chicken of the sea” in terms of flavor, but I believe this is an insult to seafood. Mussels, in my opinion, taste like the sea and have a moderate flavor. When prepared correctly, mussels are soft but have a sensitive chewiness. There are several methods to prepare mussels, and because of their mild flavor, they may pleasantly absorb the flavors of the meal you’re creating with them.

Clams can be consumed raw or prepared in a variety of ways. They have a pleasant, salty flavor. The saltiness, on the other hand, is saltier in a salty-water kind of sense. They have a fishy flavor that is neither nasty nor overbearing. The feel of clams is difficult to explain, although they are chewy and, depending on how they are prepared, can be slightly rubbery.

What do you do with them?

The straightforward answer is that you cook with them. Mussels are best served in paella, but my favorite way to eat them is in a seafood scampi. Mussels can also be cooked and eaten, dipped in butter. I don’t like them that way since the butter overpowers the light flavor of the mussels.

Clams can be eaten raw or cooked in various ways, including traditional Clam Chowder, fried, and baked. Many people believe that they are best eaten alone, with simply lemon. They’ll be delicious no matter how you prepare them!

Many people are afraid to try mussels and clams because they have a small phobia of shellfish. You’re more than ready to appreciate the pleasures of seafood now that you know what to expect from the variations between mussels and clams. These are, however, pricy, so I recommend savoring them when your family treats you to supper when they visit!