When Do Ducks Mate and Lay Eggs? When Do They Stop?

Ducks often begin mating about four months, which may be months before they begin producing eggs. Of course, it varies—mating can begin as early as three months or as late as six months. 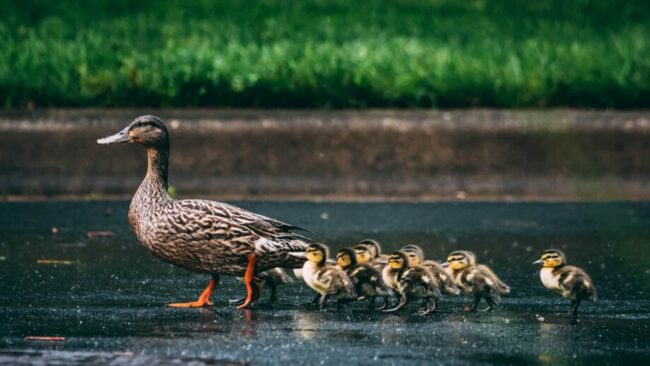 However, eggs laid without the duck having to mate with the drake are infertile and are frequently sold for food. Those eggs that resulted from mating with a drake have gone through fertilization and became viable.

How Long Do Duck Eggs Remain Fertile After Mating?

The eggs that develop after mating will be fertile in around 10-14 days.

When a duck is producing eggs, it can take up to two weeks to complete the process, beginning with the first egg and ending with the final one in that specific batch. During this time, the duck typically lays one egg daily, for roughly 12 eggs.

After depositing all of the eggs, the duck rests on them to safely cause the eggs to hatch in a short amount of time. This is done to defend and safeguard her brood. The warmth provided by the mother duck envelops the eggs, assisting them in growing and preparing for hatching. Although the incubation time varies amongst duck species, the usual rule of thumb is roughly a month.

The shells of the eggs begin to crack and hatch after the incubation period, allowing the ducklings to peep through.

Why does it take so long for duck eggs to become fertile after mating?

Male ducks, often known as drakes, have a phallus, unlike 97% of other birds on the planet. Furthermore, female ducks are born with a vaginal canal designed to fit the male phallus. If the female and male ducks choose to mate, this is how fertilization happens. This new option allows ducks to reproduce and deposit eggs in two ways.

Female ducks can retain sperm for at least two weeks after mating. During this period, the eggs in the female duck are effectively fertilized. This is why the eggs need 10-14 days to become viable. The duck’s capacity to retain sperm allows it to fertilize many eggs in a single mating season.

Ducks prefer to reproduce in bodies of water rather than on land. This is because they perceive it to be a more natural habitat for mating. However, this does not imply that ducks never reproduce on land since they frequently do if the female duck desires.

Do ducks have life-long relationships?

In contrast to geese, ducks do not mate for life. Ducks, on the other hand, are seasonal monogamists. This indicates that in the wild, a female duck will choose a male partner for the duration of the mating season.

He will guard her against other guys, but he will not assist in rearing the ducklings, as male geese frequently do. The next year, new friendships would be formed with various ducks.

Domesticated ducks follow a varied set of regulations depending on their availability. If breeding a tiny flock of ducks is their only choice, one male will breed them automatically year after year.

When do ducks begin to mate?

Ducks can begin mating when they reach 4 months of age, although it might take longer depending on the breed and the individual duck.

When a female duck starts laying eggs, she is ready to mate with a male duck.

What Time of Day Do Ducks Lay Their Eggs?

These birds often lay their eggs around daybreak, which may have already been laid by the time you let them out of their coops. But, of course, a duck may also occasionally lay in the afternoon or evening.

Because your duck may not lay an egg at the same time every day, it’s better to keep it inside until it’s finished laying if you want it to do it in its coop. It will lie in the yard if you let it out too soon.

On the other hand, ducks can store their eggs until they select a specific location to lay them.

What months do ducks lay their egg?

The female mallard builds a nest from leaves and grasses and lines it with down plucked from her breast.

Eggs are laid between mid-March and the end of July. The normal clutch is about 12 eggs, laid at one to two-day intervals. After each egg is added, the clutch is covered to protect it from predators. So if you find a nest full of duck eggs, leave it well alone – it is unlikely to have been abandoned.

The laying period is very stressful for the female – she lays more than half her body weight in eggs in a couple of weeks. She needs a lot of rest and depends heavily on her mate to protect her and their feeding and loafing areas.

When Do Ducks Quit Laying Eggs?

When a duck group is smaller, egg output is generally higher. When raising ducks commercially, however, output drops swiftly due to ducks’ proneness to anxiety.

If you want to maximize egg production and general performance, do not keep breeding ducks in groups larger than 250 birds.

Ducks exceed other poultry breeds such as chickens in terms of egg production, with an average lifespan of 7-9 years. However, the age at which they quit laying varies according to the species and how hard you’ve pushed them to lay.

Hens tend to slow down after their second or third year. However, ducks can produce eggs until they are eight or older.

Indeed, ducks that lay many eggs yearly will not lay for as many years as those that lay fewer eggs per year. This is because ducks are born with a certain number of eggs they will deposit throughout their lives.

Furthermore, the more you force your bird to lay, especially if you use artificial lighting to lengthen the laying season, the more she will lay yearly, but the sooner she will quit for good. It doesn’t imply you can force a duck to lay more eggs; rather, pushing it harder causes it to deplete its supply sooner.

The fascinating aspect of these fowls is that a farmed duck may live for ten years or more and only stop laying a few years before dying of old age. This is because their egg production tends to decline as they mature.

A duck produces more eggs during its first year than any other year, steadily declining. The good news is that they will lay eggs for 3 to 5 years and cease laying when they are 7 to 9.

As a result, we may conclude that ducks do not require a male duck (drake) to lay eggs because female ducks can produce eggs on their own. However, we must remember that these eggs will not be viable if the duck mates with a drake, the eggs she lays will become viable. This signifies the eggs will hatch and develop into ducklings.

Ducks’ reproduction is highly difficult since they must lay eggs, incubate them for a long time, and then hatch them. Ducks are only one example of several birds that do not require a male counterpart to breed and deposit eggs. Domesticated hens and turkeys are also included in this group of birds.