Eggnog is arguably the most popular holiday beverage. And how could it not be? It combines three of everyone’s favorite things: milk, sugar, and alcohol.


Over the years, the drink has evolved into a sophisticated concoction that is now enjoyed all year long. But who first came up with this tasty drink? And why does eggnog have such a long history? Find out here! 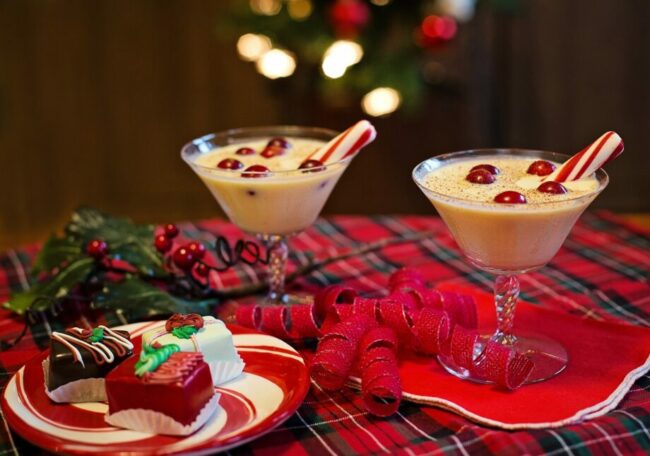 Eggnog arrived in America in the 1700s and quickly became a hallmark of the holidays. However, the origin of the word “eggnog” is unknown.

Many people believe that the term “nog” is derived from the word “noggin,” which means “wooden cup.” Regardless of how the name came to be, it became permanent in the 18th century.

What is the origin of eggnog?

Eggnog derives from posset, a medieval British milk beverage prepared with wine or beer, cream, sugar, and egg and thickened with anything from bread to oats.

Eggnog developed in Britain around the early medieval period. Posset, a hot drink akin to ale, was the correct name.

Posset evolved into an eggnog-like beverage popular with monks in the 13th century, who drank it with eggs and figs. Milk, eggs, and spices like cinnamon and nutmeg were considered luxury products.

As a result, eggnog was considered an aristocratic drink and was only provided to the upper crust.

When it arrived in the American colonies, where farms produced milk and eggs and rum was abundant, the beverage acquired popularity. In the days before refrigeration, rum was a natural ingredient to keep eggnog from deteriorating.

Because rum was freely accessible from the British-colonized Caribbean, it was replaced by more costly and severely taxed liquor. Rum was known as grog, typically served in little wooden cups called noggins.

According to folklore, egg-and-grog ultimately became eggnog. It was most likely connected with holiday meals because of its high sugar content, which was considered a luxury at the time.

What Is the Origin of the Name “Eggnog”?

The term “eggnog” may not seem appealing. Some folks are put off by the guttural sound and the prospect of drinking eggs. There are several theories as to how it got its now-famous moniker.

According to one legend, eggnog is derived from “nog,” an Old English term for strong beer. There’s also the idea that it came from “noggin,” a 16th-century term for a tiny cup.

Another story is that the word comes from American colonists who called thick beverages “grogs” and eggnog “egg-and-grog.” By the time it was printed, the terms had been combined to become “eggnog” (sometimes “egg nogg” or “egg-nog”).

Is it true that eggnog contains eggs?

A handmade version will likely come closest to the original item, comprised of milk, egg, and lots of alcohol, for those hoping to obtain a taste of the original beverage. Eggnog also contains a variety of spices, such as nutmeg, cinnamon, and vanilla. There are several variations.

When Did Eggnog Become a Holiday Tradition?

Eggnog, a rich and frequently alcoholic drink, became a popular holiday drink throughout the colonies and, ultimately, the new nation of the United States in the 1700s. Eggnog was commonly prepared without alcohol, and each area tailored the drink to its preferences.

Why do we drink eggnog during the holidays?

There is no clear reason why eggnog is consumed during the holidays–aside from the fact that such a heavy drink is a quick way to fill up in cold weather when our bodies burn more calories to stay warm–but many believe it is extremely unhealthy and should only be consumed for a small portion of the year.

A cup of eggnog has a whooping 223 calories. It’s also possible that since it’s costly for businesses to manufacture, they only do it for a part of the year. Perhaps no one wants to drink a creamy, eggy concoction on a hot summer day.