Why Can’t You Use Drano in the Toilet?

When considering a clog in your drain, Drano likely comes to mind first. One of the earliest chemical clog removers on the market today is called Drano.


However, it would be best if you don’t use Drano to unclog a toilet. There are several reasons why this is not a good idea, such as the following: 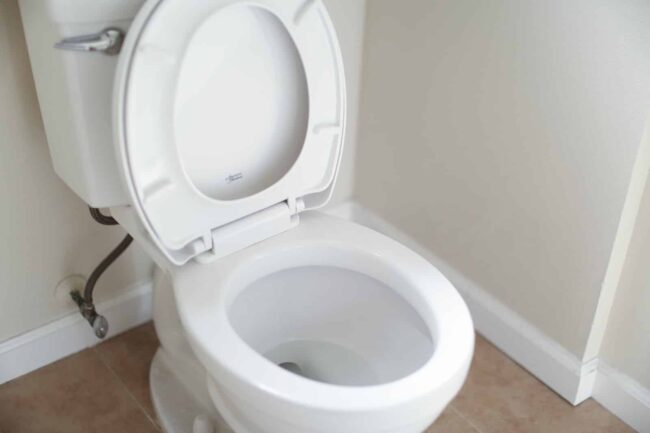 Drano can still harm other areas even though the blockage is not inside the trap.

The Drano will sit on top of the obstruction if it manages to get to it in the pipes, after which the chemical reaction will increase heat.

But since it won’t be able to clear the obstruction, the Drano will just sit there and continue to generate heat, which could harm your pipes by corroding metal pipes or softening PVC ones.

You should avoid using it in your toilet because it could severely damage your plumbing system.

It can damage your toilet

Owing to a chemical process that produces a lot of heat, Drano dissolves obstructions which is not a major issue in a sink drain, but it may be more significant if the obstruction is in the S-trap.

The trap is composed of porcelain, similar to the rest of the toilet, and the heat generated from the chemical reaction will make it expand and fracture. In this case, you would have to buy a new toilet in addition to paying for any damage brought on by flooding.

Drano could harm your plumbing system, but it can also harm your health in some circumstances.

Drano can release toxic gasses called chloramines when it mixes with specific other household cleaning solutions like bleach or ammonia. These could irritate the eyes, induce chest discomfort, or make breathing difficult.

What happens if you pour Drano down the toilet?

Drano works by dissolving drain clogs, making them simple to flush away. Caustic and bleach are the active components. A significant amount of heat is generated as the chemical reacts with the obstructions.

A trap is an S-shaped component at the bottom of a toilet. The siphon effect and subsequent flushing are caused by the toilet trap, which also contains a small amount of water to keep sewer gasses from entering the bathroom.

Unlike a sink, the toilet trap is constructed of porcelain, the same material as the toilet. The toilet will expand and crack if Drano’s chemical reaction occurs at the toilet trap because of the heat produced.

Other ways to unclog the toilet

In addition to everything else, using chemical drain cleaners too frequently could damage your plumbing and increase the expense of future repairs. Here are several methods to clear a clogged toilet.

Each household needs to have access to a plunger since it is a practical tool. Plungers are the first approach to attempt anytime you have a blocked toilet or drain since they are affordable, simple to use, and effective.

To clear a clogged toilet, you could also try using bleach. Pour a cup of water and bleach mixture into the toilet. The second bucket of hot water should be used after waiting 30 minutes.

Alternatively, pour powdered bleach into your toilet and allow it to sit there for 30 minutes before flushing it with hot water.

A toilet auger is a more sophisticated gadget that unclogs deep toilet obstructions. Augers feature a long handle plus a cable with a corkscrew end; to use them, insert the cable into the bowl and twist the handle to dig further. The ball of waste will be stabbed and broken by the toilet auger when it gets to the obstruction.

A miracle cleaner that can be used for many tasks, including unclogging toilets, is made of baking soda and white vinegar.

At least one cup of baking soda should first be added to your toilet. Next, add a few glasses of vinegar slowly. As soon as the water in the toilet bowl begins to bubble, you will see how the two chemicals interact.

Pour one or two gallons of hot water into the toilet after allowing the mixture to work for at least 30 minutes. If you’re lucky, this will be all required to clear the clog from the toilet.

Enzyme treatments are solutions that hasten the decomposition of the kinds of substances that clog toilets.

They require more time to work. However, they might be a wise alternative if you don’t need to unclog the toilet quickly.

Ensure you read the instructions on the bottle carefully and follow them when using an enzyme treatment. It’s safe to keep this sort of product in your toilet overnight; since it won’t affect the environment, it’s also a sustainable choice.

For various reasons, applying Drano to unclog a toilet is not a good idea. Several other methods can be used in place, eliminating the cost of hiring a plumber.