Why Do People Blame Others?

People typically accuse others because it’s an easy way to avoid feeling guilty. When we feel defensive, blaming is a straightforward and effortless strategy. If you don’t hold yourself responsible for the results of your actions, ideas, and emotions, you get to keep living as though you don’t need to change or have any flaws.


By placing the blame on others, we absolve ourselves of responsibility for our part in the issue. We often use the excuse of others to justify our actions, which may be the root of the problem we are trying to pass the blame for. We lose control over a particular situation when we refuse to accept responsibility. 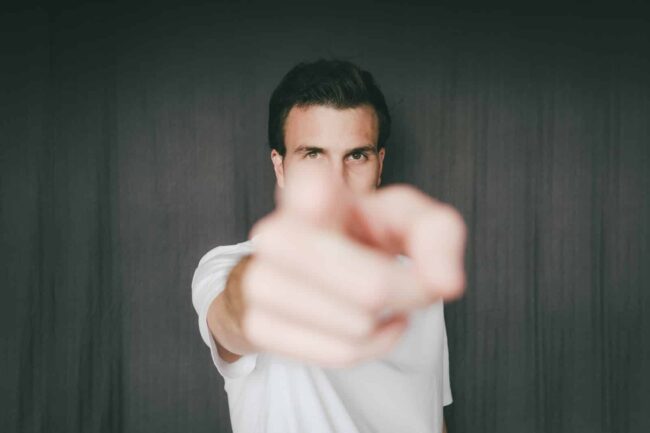 Blaming others renders us helpless, inhibits our personal development, and prevents us from realizing how we may change our behavior to reach the desired result.

Blame means taking ownership of a mistake or wrongdoing. We attribute responsibility for various occurrences: he made me lose my cool, she made me feel bad, and they pushed me to make a choice. Blaming others triggers negative feelings like resentment, rage, and hatred. We condemn our undesirable actions, ideas, and emotions to other people.

Reasons why people always blame others

Let’s begin with the gist of the matter. By placing the blame elsewhere, you are abdicating your accountability and responsibility and shifting the blame. Even if it’s just the mental burden of taking responsibility for a mistake, doing this is much easier than dealing with the fallout from being at fault.

While you may occasionally convince yourself that something is someone else’s responsibility, you will frequently be aware deep down that you are lying. But in the heat of the moment, telling a falsehood is simpler than telling the truth. People typically assess the likelihood that others will find out against the possible outcomes of telling the truth when deciding whether to lie. Then they choose the easiest option, whatever that may be.

Some people blame others if they feel themselves losing control

Losing control of a situation can easily cause panic, and blaming others frequently helps one feel in control again. Let’s take the scenario where you and your husband are having a heated dispute, losing control of your emotions, and saying something very nasty. When in reality, you felt helpless in the heat of the moment, you may try to justify your comment by blaming it on the fact that your spouse was being unkind to you in the first place.

A comment was a response to your wreath, which was the emotion you were displaying to cover up a more profound sense of helplessness. Even though you and your spouse have previously fought, you might now want to admit that your union has issues that need to be resolved.

Due to your feelings of helplessness and the impossibility of changing, in this situation, you refuse to accept personal responsibility for your actions.

It is simple to blame a terrible outcome on someone else if you don’t want to own up to your flaws or wrongdoings. We employ defense strategies like blaming others to shield ourselves from potential feelings of worry or guilt because, by placing the blame elsewhere, we can avoid having to take responsibility for our actions.

Unconscious defense mechanisms can come into play, and it’s common for people to act in ways they wouldn’t usually admit to maintaining their sense of morality. When this occurs frequently, it can become troublesome and cause someone to constantly look for an out instead of taking ownership of their actions.

Blaming others protects your fragile ego

It’s possible to blame others for functioning as social comparison. When you place the blame on another person, it provides the sense that you are “right” and they are “wrong.” Even when you blame others for making you seem like the victim, you’re still trying to inflate your ego because you want others to acknowledge your wisdom. This demonstrates a low sense of self-worth.

Do you typically hold in your emotions or think of yourself as the type of person who never gets upset? However, when things go wrong, do you tend to blame others? You are likely repressing your emotional anguish by assigning blame and avoiding accountability, but you may use guilt to vent it. You can be accused for this exact reason because it might feel highly liberating to let it all out and realize that it wasn’t your fault.

What is the cost of blaming others?

Think again if you wish to believe that avoiding taking personal responsibility is a non-issue. The long-term effects of blaming others on your life and personality development are possible. It can prevent the subsequent:

Blame is a form of protection.

Additionally, spending so much time defending ourselves amounts to a part-time job that causes us to close off on what others have to teach us regarding growth-promoting teachings.

By using blame as a shield against responsibility, you also avoid being genuine and truthful about your emotions and accepting and paying attention to others. The growth of empathy in a person is hampered when you routinely avoid this potent, exposed process of negotiating and speaking.

It is not unexpected that if you are a blamer, it’s likely you don’t have great relationships with others because blame avoids effective communication, which is a necessary component for healthy relationships to flourish. Blaming others is a form of human devaluation. It drives people away or fosters an unsafe situation where there is no trust, and the other person cannot unwind because they constantly feel evaluated and undervalued.

Making everyone else responsible for your problems renders you helpless. Consider this: if everything is someone else’s fault, you cannot affect any change.

Your positive influence on others and yourself

Research has demonstrated the spreading nature of blame. When you assign blame, individuals around you are more likely to do the same. In other words, you are influencing those close to you at work and home with your propensity to evade accountability. It has repercussions, mainly if you are a parent of small children or in a leadership position where others look up to you.

How to avoid the habit of blaming

People frequently have an unreasonable expectation of perfection, which causes them to take responsibility for their errors on others. You miss out on the chance for personal growth when you engage in the blame game.

Blame is a form of self-defense; if you use it all the time, you’ll never be able to hear what other people have to teach you or help you grow.

Start considering taking responsibility for your actions as a method to learn from your own and other people’s mistakes.

Accept your propensity for making mistakes as a path to personal growth.

You should make an effort to improve your actions, but keep in mind that everything around you is faulty.