How Long Do Wolves Live And Why?

The largest members of the canid, or dog, family are wolves. Domestic dog breeds like the German shepherd and malamute are closely related to wolves, which are the ancestors of domestic dogs. In reality, there are around 40 different subspecies of the two globally recognized wolf species, the gray wolf (Canis lupus) and the red wolf (Canis rufus).


How long do wolves live in the wild?

Wolves have a 5 to 8-year lifespan on average in the wild. Wolves inhabit hazardous environments. Although they have a few adversaries, their particular style of existence leaves them open to attack. Wolves have occasionally lived in the wild for nearly 15 years. 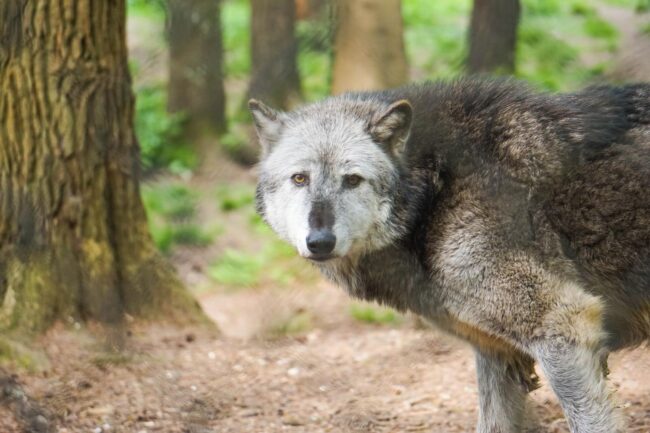 These wild animals’ usual reasons for mortality are starvation, malnutrition, illness, and wounds. In addition, most wolves that reside near humans perish due to human activity. Among the human actions that kill wolves include car accidents, unlawful killing and hunting, and the repair of livestock damage.

How long do wolves live in captivity?

Wolves can live longer in sanctuaries or zoos where they are kept in captivity. In captivity, the lifespan is typically between 14 and 16 years. This is because the workers there are fully aware of the feeding requirements for wolves.

Additionally, they can handle any medical conditions and physical traumas, and no fatalities or complications are caused by rivalry or unforeseen attacks from other animals.

On average, wolves in the wild pass away significantly sooner than wolves kept in captivity. One of the leading causes of natural mortality is starvation. So battles with other wolves and huge animals can result in deadly injuries. The disease risk is also possible, and human encroachment on wolf habitat increases it.

The heaviest wolf ever captured weighed 175 pounds (79.3kg). Generally, male wolves in the north are bigger than those in the south, and vice versa.

Because they are carnivores, wolves typically hunt on huge ungulates, such as elk, deer, and boar. In addition, wolves have been known to feed on sheep and cows with easy access to livestock.

Without their preferred prey, wolves will consume smaller mammals, reptiles, insects, fruits, and berries. Wolves eat a lot when they can because they may have to wait days between large kills. They can eat up to 22 pounds (10 kilograms) in a single meal.

The male and female leaders of the pack, known as the “alpha couple,” are the ones who mate. Wolves only mate with one person and typically remain devoted to the female for their entire lives. A pregnant female wolf typically gives birth to 4, 5, or 6 pups after carrying them for 2 months.

Depending on their region, wolves reproduce once a year in the late winter or early spring. For instance, although gray wolves in the arctic may breed a few weeks later, in March or April, those in the Western Great Lakes region may breed in February or March. Conversely, late January or early February is when red wolves typically breed.

Wolves are found in several different subspecies throughout the world. The following are some of the most interesting and prevalent wolf subspecies:

Even though they are all similar, each one of them differs in at least a few ways.

Where do wolves live?

Wolves typically hunt together as a pack and live in packs. They need to be a part of a pack if they wish to survive for a longer time. A wolf pack consists of six to twelve wolves. The only other land-dwelling mammal with a larger natural range than gray wolves is the red fox, which is related to them.

Diverse gray wolves can be found in North America, Europe, and Asia, as far north as the Canadian Arctic, and as far south as India, even though human activity has severely restricted their habitat and population.

Are wolves dangerous to humans?

No, is the common response. Wolves usually steer clear of people. Although there were no witnesses, there are several credible reports of wild wolves attacking people in North America.

There are still tales of wolves killing people in Russia, India, and other regions of central Asia. Wolves are capable of killing people, just like any other huge predator. Campers and hikers should take all necessary precautions to avoid wildlife-related accidents.

What is a wolf pack?

A wolf pack is a tightly knit family group of adult parents and their kids from the current year, sometimes the year before, and occasionally two years or more. The alpha male and alpha female, or the alpha pair, were once used to describe wolves’ parents. However, “Breeding male,” “Breeding female,” and “Breeding pair” have taken their place. Typically, the adult parents are unrelated, and occasionally, other unrelated wolves may join the pack.

Why do wolves howl?

The wolf’s howl is one of nature’s most evocative and potent noises. Depending on your perspective, the haunting chorus of wolves howling can be beautiful or terrifying. Wolves use their howls as a form of communication. They use howling to find other members of their pack and frequently howl in unison before going on a hunt. In addition, the cry serves as a clear warning to nearby wolves to keep clear.

How do you differentiate red wolves from gray wolves?

Red wolves are smaller than gray wolves and bigger than coyotes. They have some black along their backs and are buff or brown in appearance. Their legs, skull, and backs of their ears are frequently colored scarlet. They have long legs and large, asymmetrical ears. White-tailed deer and other small mammals like marsh rabbits, raccoons, and nutria make up most of the red wolf’s diet.

Is it legal to own a wolf?

Pure wolves are considered an endangered species and are therefore prohibited from owning in the US. Although it is lawful to own a 98/2% wolf dog on a federal level, many states, counties, and localities are banning all wolves and wolf dogs altogether. Any wolves or wolf-dogs discovered in these regions are immediately put to death.

The largest member of the canid family is the wolves. All regions of the Northern Hemisphere have wolves. They’re typically wary of people, but unlike dogs, they have never been tamed. Due to their social nature, wolves typically live in packs of eight to twelve.

The lifespan of wolves depends on a variety of factors. Some wolves pass away shortly after birth, while others are murdered or pass away in their teens or early twenties. Wolves and domestic dogs, members of the canine family, can live to be 15 or 16 years old and occasionally even longer.

The first winter of a pup’s life is often it’s last. However, if they can escape deadly injuries and eat sufficiently, those who survive the first two years have a fair chance of lasting another two to four years. Wild wolves can live up to nine or ten years, and there are documented cases of some of them surviving into their early teens.